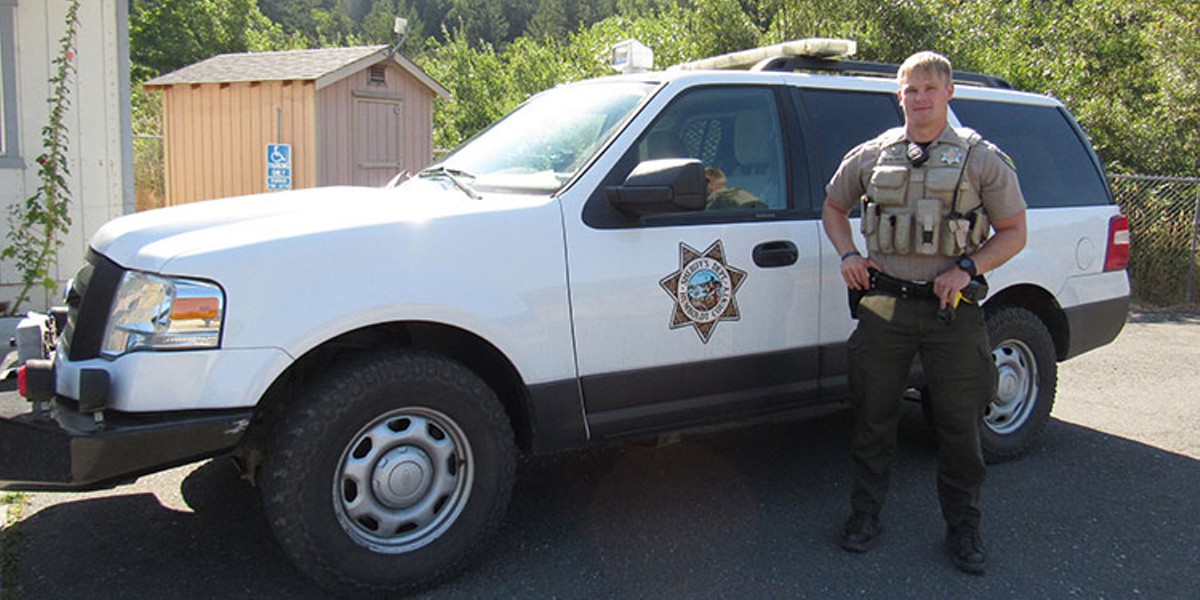 Photo by Linda Stansberry Deputy Ben Filippini stands next to his rig at the Bridgeville Community Center.

Humboldt County Sheriff's deputy Ben Filippini is 24 years old and just three years out of College of the Redwood's Police Academy. Beneath the back of his short blond hair, his neck is sunburned a dark red where a tactical helmet and mask did not cover his skin at a recent outdoor training session. He's quick to smile, quick to laugh and he listens more than he talks. All of these things work in his favor at his current job — resident deputy for State Route 36 from Fortuna to Blocksburg.

Filippini's appointment as a rural deputy is one of several positions funded by Measure Z, a sales tax measure that county voters passed in November of 2014. A recent report by the Humboldt County Civil Grand Jury described rural areas of the county as being "seriously underserved by law enforcement and other emergency services." Among the problems described were slow response times to 911 calls, fears of retribution from criminals should someone call law enforcement and — in Eastern Humboldt County — a "culture of 'lawlessness' which prevails due to the lack of law enforcement services." (The Humboldt County Sheriff's Office has yet to formally respond to the report.)

Filippini knows the region and its culture well. He grew up near Hydesville, just outside Fortuna, although he went to Ferndale High School. It's common for people to examine his name badge and ask about his father or grandfather. Many of the people he talks to on his daily beat, driving from Fortuna to Bridgeville and back, are family friends or neighbors. It's a different dynamic than the one he was trained to handle at the police academy, or the one he experienced when working the graveyard shift in Eureka.

"You handle things a little different," he says. "If people you know are messing up, they don't get any wiggle room, but you find your formula."

According to the grand jury report, roughly two-thirds of the county's population live in rural or unincorporated areas. Until 2008, many of those areas had their own resident deputies. But a nationwide recession and subsequent budget cuts in the sheriff's office led to the loss of resident deputy positions and staffing of substations of many rural areas, including Garberville and Willow Creek.

Measure Z's passage allowed the HCSO to unfreeze 30 vacant positions and staff the Garberville and Willow Creek substations. Orick, Orleans and Bridgeville now have resident deputies, and efforts are underway to bring community service officers to Eastern and Southern Humboldt. Finding funding and housing for these positions continues to be a challenge, and a combination of a lengthy hiring process and poor retention rates due to low salaries exacerbates the issue. And, while residents in these outlying areas consistently express concerns in community meetings about crime and criminal behavior, officers still struggle with establishing trust in regions that have effectively had to police themselves for close to a decade, even as cannabis cultivation grew exponentially.

"We just hear about a fraction of what goes on," Filippini says. While he assists the county's Drug Enforcement Unit on raids, his primary concern is the criminal issues sometimes associated with grow ops, such as theft and rape, not ferreting out illegal scenes.

The unwillingness of some victims to report crimes or follow up can be frustrating for the deputy. He knows where the hot spots of crime and dysfunction are — the house where a mentally ill man beats his wife, the trailer where an elderly woman has a squatter's nest of heroin addicts, the recently permitted grow where chainsaws and gasoline routinely disappear — but more often than not, people just want to vent, not file a formal report. And if they don't want to officially report a crime, there's not much Filippini can do besides listen.

Such is the case when he gets his first call of a day, from a road rage incident on U.S. Highway 101, where a man flipped off a bad driver and had a pistol pointed at him in return. Although the call happened off his beat, close to College of the Redwoods, he goes to the victim's business and takes a report anyway, nodding and writing down a description of the brandisher and his car. But when he asks the man if he would like to "be a victim of a crime," the man says no. Filippini nods amiably, though he says afterward, "If you don't have a victim, you don't have a crime." A different deputy will try to track down the gun waver and check as to whether his weapons are registered, but he won't arrest him for "brandishing" without the witness' testimony.

"It's still really weird out this way," he says. "Half the population is really excited I'm here, the other half would rather handle it on their own."

Heading east toward Bridgeville, Filippini gets a call on his flip phone. He listens closely to the voice on the other end, repeats an address and gives an ETA. It's a Hydesville resident complaining about people speeding on a private road. Filippini will go and, after the obligatory questions about his father and grandfather, patiently listen to the complainant's long oral history of bad driving and near-misses on the shared road. Although he sees action — Filippini has been a first responder to several murder scenes and broken up his share of domestic disputes — a great many of his calls are about bad neighbors, bad drivers, trespassing and other matters that won't necessarily generate a report, much less an arrest. The trespassing and property line disputes can be particularly time consuming. He usually refers people to the county surveyor to get their boundaries redrawn. But nevertheless, he listens. He drives down backroads at the request of Neighborhood Watch participants, making his presence known. He stops and talks to senior citizens on their morning walks, catching up on gossip. He follows up on calls about loud music and public nudity, and when the property maps inevitably come out, he examines them and nods politely while slapping mosquitoes. Part of it might be his upbringing — his dad's a retired Marine, his mom a schoolteacher — but a larger part is self-preservation.

"Being out here by myself, the last thing you want is to make people angry with you," he says. "You're so far away from back up. You've got to pick and choose your battles."

And when he chooses a battle, he tries to be ready. Filippini trains seven days a week — cardio, free weights and jiu jitsu — to make himself as hard a target as possible. Working alone in one of the most remote regions of the county, he wants to be able to put up a good fight. Such was the case when he spotted a wanted warrant suspect — Wade Harris — who had broken down on State Route 36 on June 14. Filippini got out of his car to talk to Harris, who allegedly shouted, "I'm not going to let you take me, you're going to have to kill me." After a short chase through the brush, Filippini tackled and subdued Harris, taking him into custody.

News about the incident broke on local media before Filippini could tell his mom he was safe and she left several frantic messages on his phone wanting to make sure he was OK. The deputy says when he finally called back, she gave him an earful.