For self help and survival 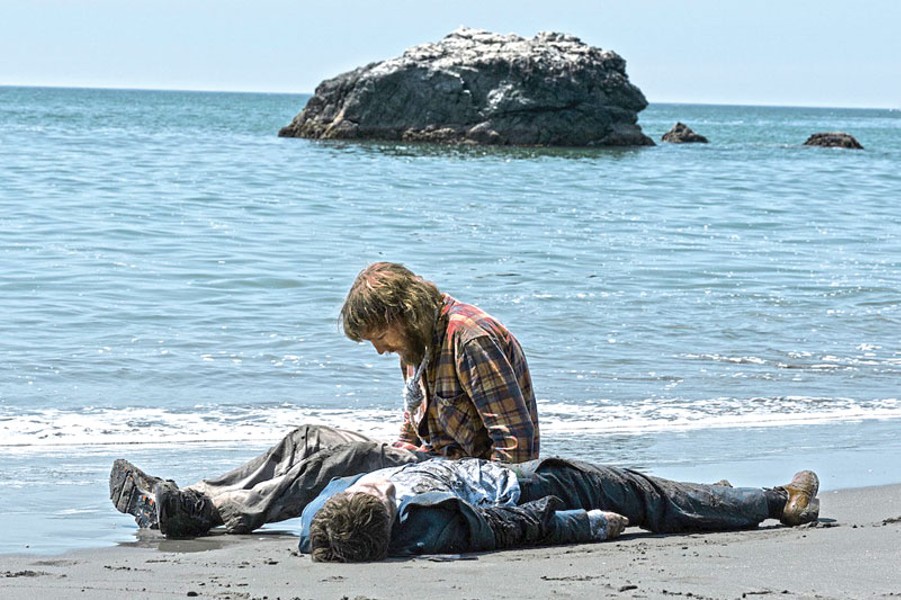 We've all had that weekend in Trinidad.

SWISS ARMY MAN. If we're being honest, Humboldt County doesn't really have the best track record when it comes to recent movie production. Sure, we get a little thrill of pride and recognition when Hollywood comes to town, but this fades when home becomes the blurry backdrop for yet another nondescript, low-to-mid-level thing that fails to register in the collective cultural consciousness. Outbreak (1995) felt like something of a moment, and a few local businesses still make hay out of Dustin Hoffman's light, passing praise for their establishments. Many eagerly mention Jurassic Park (1993) or The Empire Strikes Back (1980) as parts of the County's cinematic CV, and we did play host to Bobcat Goldthwait's Willow Creek (2013), which showcased some of the area's more ... unique aspects so vividly that audiences might imagine they were manufactured for the production. On the wider stage, we have most recently been affiliated with the bloated, forgettable Smith family/Shyamalan collective bad idea After Earth (2013). The less said about it the better.

Which is a long way around to Swiss Army Man, which famously brought Daniel Radcliffe to a Eureka Denny's and which goes a long way toward erasing the bad memories of Hollywood's last, disastrous misadventure on the North Coast.

A bearded castaway named Hank (Paul Dano) is, literally and otherwise, at the end of his rope. Marooned on a tiny island somewhere in the Pacific, his already delicate mental state eroded by isolation, thirst and hunger, Hank has decided to end it all by hanging. Just as he tightens the noose and steps off the ice chest-cum-gallows, he meets a new friend. Well, a flatulent corpse in a blue suit washes up at the shoreline. After an awkward introduction, Hank concludes that life may be worth living, after all. The corpse, who is called Manny (Radcliffe), relents to be ridden, in Hank's words "like a jet ski," his voluminous gas propelling the duo effortlessly across the white caps. They make landfall soon enough and begin an arduous overland journey of survival and mutual self-discovery. In bringing Manny back to some form of life, Hank must visit his own darker corners, confronting a lifetime of fear, loneliness and daddy issues. Manny, having in death lost his frame of reference, becomes Hank's therapist in a way, an unbiased advocate motivated only by friendship and curiosity. He also becomes a sort of multi-purpose tool, as fresh water runs from his mouth, his erection indicates magnetic North and rocks shoot from his mouth like bullets. Yeah, it's different than most movies.

Written and directed by Daniel Kwan and Daniel Scheinert (who credit themselves as "Daniels," which is so cute I almost left the theater), Swiss Army Man is an imperfect but vividly, full-bloodedly imagined work of art. There are moments, as when Hank and Manny recreate moments from Hank's life with found objects and forest matter, that veer queasily close to preciousness. But the force of the Daniels' vision, the honesty of the feelings at its base and the economical ingenuity of their movie-making easily win the day. And it doesn't hurt that Dano and Radcliffe both give fine, humane, hilarious performances in weird, distinctive, sometimes painfully relatable roles. This is the kind of movie our kooky county would do well to be identified by. R. 117m. BROADWAY.

THE BFG. The movies of Steven Spielberg were, in my childhood, rivaled in ubiquity perhaps only by the books of Roald Dahl. As a pre-adolescent, the discovery of Dahl's canon was like learning how to breathe, only better. He created worlds so enchanting and inviting that moving into them was effortless, like drifting into blissful, dream-filled sleep. Simultaneously, Spielberg was informing me with his equally friendly, innocent-populist fantasias. (I would go through a period, after my discovery of Scorsese and Coppola by way of Tarantino, of Spielberg denigration. In that prickly time, I mistook the joy and ease of his work for simplicity or naiveté. It would take some years and living of life to realize my mistake.) So it seems completely natural to me that Spielberg would take on the adaptation of one of Dahl's most distinctive books.

Sophie (Ruby Barnhill), an insomniac and so the last one left awake in her orphanage, hears strange noises in the road late one night. She pulls back the curtains and is spirited away by a giant, a Big Friendly one (Mark Rylance). He carries her off to Giant Country, concerned she might tell someone of his existence. He means Sophie no harm, of course; he's a gentle guy in the business of dream collection and distribution. The nine giants with whom he shares his country, though, are made of different stuff. To a one, they have given themselves over to snatching and eating "human beans" and tormenting the BFG, the runt of their dysfunctional family. So while he must conceal and protect Sophie, she must help him to become strong and self-reliant.

I don't have to sell this story; it's one of the best. Barnhill and Rylance make a sweet, memorable duo, and Spielberg uses some of his trademark technique to imbue the movie's atmosphere with wonder and possibility. The script sags pretty heavily in the later going, unfortunately, but the magic of its premise and the escapist joy of the first act endure. PG. 120m. BROADWAY, FORTUNA, MILL CREEK.

Due to the holiday, updated schedules for Broadway and Mill Creek were not available at press time. For showtimes, see the Journal's listings at www.northcoastjournal.com or call: Broadway Cinema 443-3456; Fortuna Theatre 725-2121; Mill Creek Cinema 839-3456; Richards' Goat Miniplex 630-5000.

THE SECRET LIFE OF PETS. A new dog in the house throws off the status quo in this animated comedy with Louis C.K., Jenny Slate and Kevin Hart. PG. 90m. BROADWAY, FORTUNA, MILL CREEK.

CENTRAL INTELLIGENCE. This buddy/spy comedy has a serviceable story about a former dweeb who becomes a ripped CIA operative (Duane Johnson) and a popular guy disappointed with his adult life (Kevin Hart). But the leads' chemistry and charm makes going to the reunion worth it. PG13. 107m. BROADWAY, MILL CREEK.

INDEPENDENCE DAY: RESURGENCE. Another alien invasion brings back most of the old crew (Bill Pullman, Jeff Goldblum, and hey, Vivica Fox) and some young'uns (Liam Hemsworth, Jessie T. Usher) to defend the earth, if not its architecture. PG13. 120m. BROADWAY, FORTUNA, MILL CREEK.

LEGEND OF TARZAN. After his Victorian makeover, Tarzan (Alexander Skarsgård) reverts to his chest-pounding ways to rescue his bride from a Belgian baddie. PG13. 87m. BROADWAY, FORTUNA, MILL CREEK.

NOW YOU SEE ME 2. But maybe you don't have to. This sequel about do-gooder magicians can't pull the same rabbit out of its hat as the original, despite a charming ensemble cast and fancy illusions. Starring Mark Ruffalo, Morgan Freeman and Daniel Radcliffe. PG13. 115m. BROADWAY.

THE PURGE: ELECTION YEAR. So they're still making these. This one has Leo (Frank Grillo) running the gauntlet with an anti-annual-murderous-free-for-all politician (Elizabeth Mitchell). R. 139m. BROADWAY, MILL CREEK.

THE SHALLOWS. Blake Lively plays a surfer trapped by a shark close to shore. It's entertaining and Lively is up to the challenge, but the story could use more bite. PG13. 87m. BROADWAY, MILL CREEK.