Could the entire city of Arcata become a certified wildlife habitat? These guys think so. 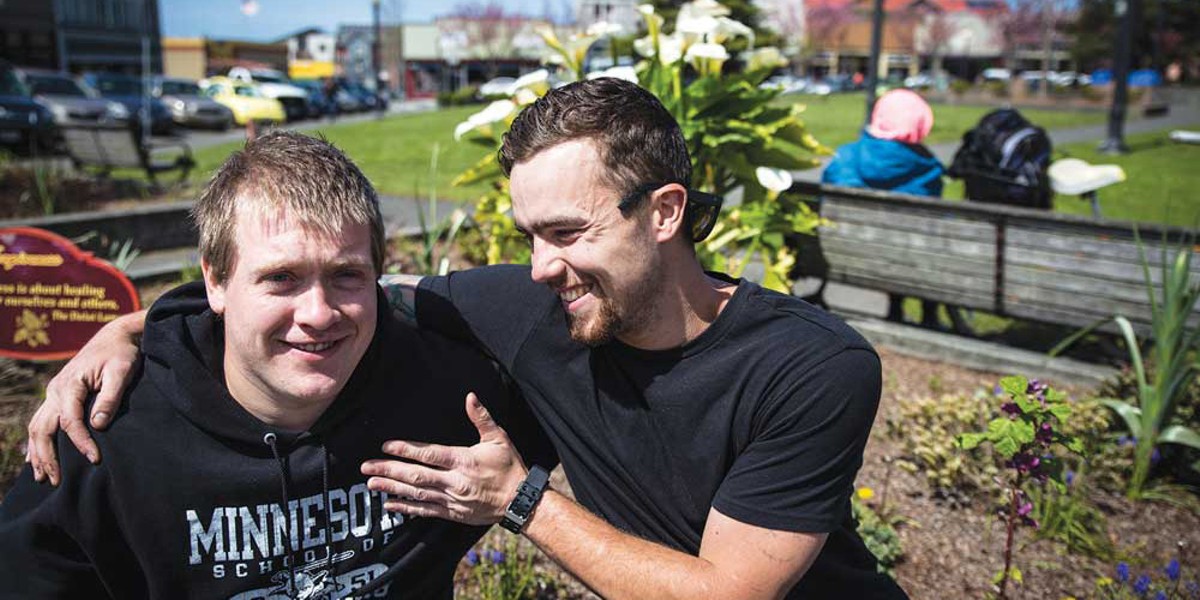 Daniel Viellieux stepped out onto the Arcata Plaza followed by his friend and partner Joseph Ferber. The pair walked counter clockwise around the square and pointed to different plant species featured in raised garden beds surrounding the square. They stopped at one corner and began to pull weeds as they discussed their shared dream.

Ferber and Viellieux are continuing a movement to make the entire city of Arcata a certified wildlife habitat. They both work seasonal jobs, in forestry and parks, but their true passion stems from two years spent in the California Conservation Corps.

The two friends, both in their mid 20s, are starting a business to turn Arcata backyards and gardens into Certified Wildlife Habitats. By 2020, the two hope to have about 25 percent of the city certified. By 2025, if they get enough community support, they hope to see almost the entire city certified, recognizing that the biggest challenges are outreach and getting people to accept change.

Sitting on the plaza, Viellieux double-checked different plant species. He gripped a weed with his right hand and pull it up by the base. On his upper arm there is a humming bird tattoo in remembrance of the grandmother who raised him. The two landscaping buddies met while serving in the Conservation Corps, which they credit with pushing them toward life of conservation.

"As future leaders in the next generation we are just hoping to do our part," Viellieux said.

Ferber grew up in Minnesota and after he graduated from Minnesota State University with a degree in environmental science, he joined the Conservation Corps there and again in California.

Ferber said one problem with having non-native plant species in your garden is, while it may look pretty, you're not actually contributing anything to the local landscape other than aesthetics. To create a city that is also a working ecosystem, it's important to have plants that support the insects, which support the birds. Ferber and Viellieux said butterflies and bees are facing huge challenges and barriers locally, in part because of the abundance of non-native plants.

"If you're on the North Coast, why wouldn't you want to be surrounded by the native North Coast plants?" Viellieux asked.

For now, the two are bootstrapping the budding business, using all their own equipment. But they said the vision is to bring together ex-Conservation Corps members to help transition Arcata's yards and open spaces.

Ferber and Viellieux's main source of inspiration comes from a local corps crew supervisor, who has worked with the National Wildlife Federation multiple times and started certifying Conservation Corps' campuses.

CCC conservationist John Griffith said when you're in the corps you do a lot of restoration work in other places, but most never really think about restoring their own land.

According to Griffith, who has been a conservation crew supervisor for 15 years, a large percentage of species in Arcata are from Asia, which doesn't make any ecological sense. He said Ferber and Viellieux's work is important because it brings conservation workers into the workforce without them losing their sense of purpose as well as helping local wildlife.

"Not a lot of towns or cities are friendly to wildlife, but they could be," Griffith said.

The pair have already worked in partnership with the city and local organizations, but plan to focus on getting commercial land and parks certified. "It's just such a simple way to help wildlife and it's so important," Griffith said.

There are a few things a property needs provide local wildlife in order to earn the certification: food, water, cover and a place to raise young and sustainability. The property also needs to be sustainably landscaped. When a property meets these goals, it can be certified as a wildlife habitat through NWF.

While the list of requirements may seem daunting, it doesn't have to be complicated. A water tray or birdbath can provide the needed water source. A log, fallen tree or bush can give wildlife the shelter needed to hide from humans, predators or inclement weather. And a simple nesting box can provide wildlife space to raise their young. But, most importantly, it's the native plants that provide a food base for bees, butterflies, birds and other animals that may use a backyard as a sanctuary.

The whole application process takes place on line, through the NWF website, which provides a self-reported checklist. And while Ferber and Viellieux have helped certify properties as large as the Jacoby Creek Land Trust, no property is too small for the designation.

"You don't need a yard or a large piece of land, you just need a porch or a pot to make a difference," Griffith said.

As Griffith notes, something as small as a flower box can earn the certification, so long as it meets the criteria. Started in 1973, the Garden for Wildlife program is aimed at not only certifying properties, but also educating people and connecting them with their local ecosystems.

According to its website, the NWF has certified more 200,000 spaces that add up to 1.5 million acres of land. The NWF provides help guides and instructions. But for those unsure of what to do or who need some guidance and are willing to pay for the labor, Ferber and Viellieux said they will pay for the plants needed to certify a yard, ensuring it has a symbiotic relationship with surrounding wildlife.

"It all starts with native plants," Ferber said, adding that planting natives also means a garden will need less watering and support.

"We have to be aware of all of the little things that have a huge impact," Viellieux said.

Ferber and Viellieux see the certification as a way not only to help out the local ecosystem but also the global one. Fighting climate change, they said, should start in your own backyard.

Sam Armanino is a journalism major at Humboldt State University and the Journal's former editorial intern. Reach him at sam@northcoastjournal.com and follow him on Twitter @SamSva32.