Pruning back unruly berries, not for the birds 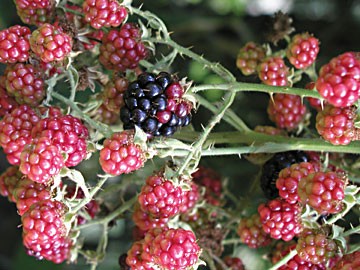 Difficult, thorny, seemingly impossible pruning jobs don't happen by accident. You have to really be dedicated to neglecting your garden in order for it to get so overgrown that you're afraid to even approach it. I have been just this dedicated to my raspberry and blackberry bushes, and now I have the scars to prove it.

I devoted two sections of prime garden real estate to these berries a few years ago. I bought all kinds of interesting varieties (many of which, by the way, are available in bareroot form right now at garden centers around town) — tayberries, loganberries, thornless blackberries and a couple different varieties of raspberries. I fought hard to keep the weedy and aggressive Himalayan blackberries out of the patch, and I even put a few stakes in the ground and strung wire between them with the overly optimistic idea that I would actually train these berries up a trellis rather than allow them to grow into a tangled, unmanageable thicket.

But of course that didn't happen. The berries laughed at my silly little trellis and quickly overpowered it. They invited the Himalayan blackberry back into the yard, making it impossible for me to tell what was a weed and what was part of my summer fruit crop. To make it worse, the instructions for pruning berry vines were surprisingly complicated. Some varieties produced fruit off the first year's growth, while others only fruited on canes that were two years old. You are supposed to set up some sort of trellising system that would allow you to keep track of the first year and the second-year canes so that you cut off only the second-year canes after they've fruited. I can barely keep track of my car keys. There was no way I was actually going to make a system like this work.

Instead, I've allow the berries to do what they want to do and I whack away at them when they get too unmanageable. This is actually not a bad strategy and you do get some berries out of it, although it might require a ladder and elbow length leather gloves to get at them. Hey, I've still got some of last year's black berries in a Ziploc in the freezer. It works.

The other advantage to the overgrown thicket strategy is that it makes for very entertaining birdwatching. Birds cannot resist a thicket. They are sharp, swift little creatures, and they love nothing better than to spend their days hopping in and out of a complicated, thorny maze that no predator could ever navigate. I love watching the sparrows hop in and out of this mess, and I tell myself that I'm participating in a form of wildlife gardening that justifies the overgrowth. Even the chickens are drawn to the thicket: they forget that they are large, landbound, domesticated farm animals, and they disappear into the woody interior of the berry vines, even going so far as to create a little nest and start laying eggs there like the jungle fowl they once were.

It was the egg laying that finally did it for me. My hens are pampered pets, not livestock, and I'm not going to wring their necks when they stop laying every day, but I don't think it's unreasonable of me to ask that they at least lay their eggs in their nesting boxes like ordinary chickens. Easter egg hunts around the garden sound charming. Laying on your stomach in the mud in the rain and reaching your bare arm into a thicket to try to extract your breakfast without breaking it or getting scratched: not so much.

So today I chopped down the thicket, wading into the thorns with a pair of rusty pruning shears and some very inadequate gloves. It was painful and time-consuming work, but I did get some satisfaction out of taking the whole mess down indiscriminately. No more first-year canes, no more fruiting canes, no more uninvited and poorly behaved Himalayan guests, nothing. The garden is bare. It looks like it's been mugged.

Now an enormous pile of woody old vines sits in the corner. The chickens are eyeing it with considerable interest; it's just the sort of tricky housing arrangement that might start to look interesting after you've been living in a rickety old coop for a few years. But before they start measuring for curtains, the pile's going to get hauled away. And in a couple of months, the whole cycle will start all over again: the early shoots, the first blooms, the summer fruit and the reconstruction of a hiding place for the birds. Maybe this year I'll stay on top of it. Maybe I'll build a real trellis and keep the vines tied up and get an orderly, predictable harvest. Maybe the hens will go back to laying their eggs where they're supposed to. Maybe, but not likely.