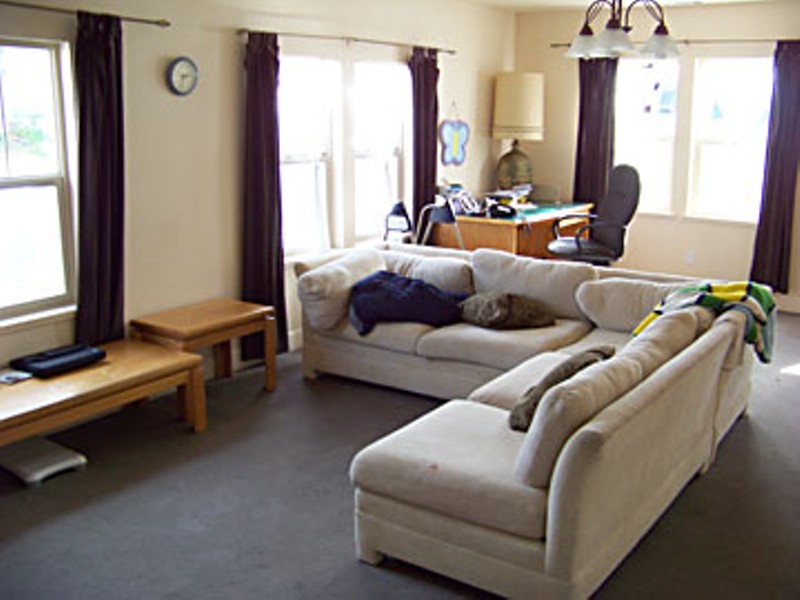 The living room at the downtown location of Arcata House, a transitional housing site. Photo by Ryan Burns

When asking people to fill out a survey, it's polite to offer an incentive. So when a group of volunteers set out in late January to compile an accurate head count of Humboldt County's homeless population, they brought socks. Why socks? "’Cuz," said Fox Olsen, co-chair of the Humboldt Housing and Homeless Coalition (HHHC), "if you live on the street and you're walking a lot and it's wet, having a clean, dry pair of socks is really nice." It also helped to prevent double-counting: When a pollster approached someone who'd already been surveyed, Olsen said, the previously polled pedestrian would simply hitch up a pant leg as if to say, "You already got me, bro."

Thanks in part to the socks, though mostly to an unprecedented effort from a coalition of local agencies, the survey is being viewed as the most accurate point-in-time count ever conducted in Humboldt County. (The results are still being tabulated. Olsen estimates the total number of people who were homeless on the night of Jan. 27 will come in at around 1,500 -- significantly higher than in previous years.) The tally couldn't come at a more important time. The U.S. Department of Housing and Urban Development (HUD), which just awarded Humboldt County's homeless service agencies more than $400,000 in grants, is demanding ever-greater accountability. Meanwhile, the county planning department and board of supervisors are assembling their five-year update of the general plan's housing element, which won't be effective without an accurate picture of housing needs. And then there's the recession/depression, which is putting the squeeze on funding while simultaneously increasing demand for homeless services.

Sometimes lost in all this talk of agencies, numbers and programs are the homeless themselves, though Olsen, who works with this community almost daily as the executive director of Arcata House, a transitional housing program, manages to keep these men, women and children at the forefront of her perspective. From the corner office of Arcata House's downtown location -- one of the agency's three transitional houses in Arcata -- Olsen discussed the county's cooperative efforts to achieve a seemingly impossible goal: ending area homelessness in the next 10 years. "It's a daunting job," she said, "and on the good days I feel like we're making progress."

A tall, affable woman who dives into her job (and conversations) headlong, Olsen said local agencies have been pooling their efforts in recent years to help the homeless -- or, as she calls them, "our folks." The HHHC, which includes such local groups as the Redwood Community Action Agency (RCAA), Arcata House, the North Coast Substance Abuse Council and the Veterans Resource Center, to name just a few, formed in 2003 with the goal of coordinating efforts and landing some of that HUD grant money. HUD offers competitive funding grants annually through a system called the Continuum of Care (CoC). As the name suggests, the CoC approach looks at homelessness comprehensively -- leading people from the streets to self-sufficiency one step at a time.

"The idea behind the Continuum of Care and the Humboldt Housing and Homeless Coalition is to get all the service providers together," Olsen said. "When we first started thinking about it, there really was a lot of excitement. We [the various agencies] all knew about each other; we all referred to each other; we all knew about each others' programs -- but there really wasn't a place to come together." The HHHC, which meets every two months, serves that purpose and also serves as the parent organization when applying for HUD grants. In order to qualify for CoC grant money, a program must not only be part of a CoC district (which vary in size -- ours incorporates the entire county), it must also prove itself as an effective component of an effective district. It's a lot of hoops to jump through, and for many years our local agencies didn't even bother.

"We've had informal group meetings for the last 20 to 25 years," said RCAA Family Services Director Simone Taylor. As a member of the HHHC executive committee, Taylor has seen the benefits of greater organization and inter-agency cooperation. "With funding dollars as tight as they are, the best way to address the issue [of homelessness] is by trying to be as inclusive and broad as we can," Taylor said. "Getting different ideas at the table -- I can't stress that enough -- that's been the best thing that's come from this."

To tackle the daunting task of writing CoC funding applications, the HHHC employs HomeBase, a non-profit Bay Area law firm dedicated to homelessness issues. What makes the application process so daunting? "It's a really big document," said HomeBase attorney Piper Ehlen, who prepares Humboldt County's application. "[It] describes everything going on in the county in terms of ending homelessness -- an inventory of housing and services; the numbers of homeless divided into subpopulations; progress on goals we've set; goals for the next year," she said. Once submitted, the applications become part of a nationwide competition for funds, with HUD awarding grants to CoC districts based on a point system. "We're competing with 450 other continuums throughout the nation," Ehler said, "and if we don't hit that funding threshold, we don't get anything."

That's exactly what happened four years ago. After receiving a staggering $787,625 in HUD grants in 2004 (the first year they had applied), the Humboldt County CoC received nothing in 2005. "It's very competitive," Taylor explained. "These are the premier housing dollars in the U.S., and when we compete, it's tough. We lost by something like two-tenths of a point. But losing isn't always a bad thing," she added. "We missed the money, but it re-engaged us. It got us to really review every aspect of how we submit ideas."

Attempting to remedy a shortage of studio and one-bedroom apartments in the area, Arcata House created a program called Apartments First!, which offers permanent supportive housing and services to physically and/or mentally disabled homeless. By working with local landlords, program organizers place clients into apartments. Landlords know that if there's a problem, they can contact the program's housing specialist or the care coordinator, who connects clients with social services and helps them with applications and paperwork. "HUD loved that idea," Taylor said. And they continue to support it. In the most recent round of funding, HUD provided Apartments First! with a $108,844 renewal grant. Another $82,353 went to fund a county-wide computerized reporting system called the Homeless Management Information System. Eureka's Multiple Assistance Center, which has struggled for funding over the years, received the largest grant -- $118,074 in renewal funds.

Olsen credits the Humboldt Area Foundation as being the first local agency to get behind the collaborative approach of the HHHC. In order to continue making headway, Olsen said that the coalition must extend even further. "I think it is gonna take not only the Humboldt Housing and Homeless Coalition, and not only the county Department of Health and Human Services, but I think we're gonna be asking the faith-based community. I think we need to be working with police officers so they're not picking up the same people again and again. I think we need to work with the medical providers that identify people that are fragilely housed," Olsen said. She considers community-wide cooperation vital and a natural part of the maturation process. "When I think about the coalition -- for a while I thought we were kinda like a toddler," Olsen said, "but I think we're actually a bit further along than that now. I think we can write our own name now, and we know some more words. And I think really the next step is reaching out. We can't do this without the community."