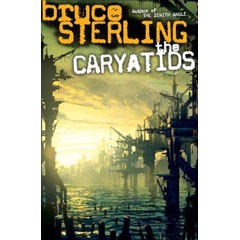 In the early ?80s, the subgenre of cyberpunk science fiction emerged as an unwieldy hybrid of avant-garde experimentalism and pulp fiction aiming to shake up a parochial literature of the future that seemed mired in conservative clichés of the past. A small circle of friends -- William Gibson, Rudy Rucker, John Shirley and Bruce Sterling -- exchanged manuscripts and hyped each others work. Their influences were eccentric writers inside the genre and out: Philip K. Dick, Alfred Bester, J.G. Ballard, Thomas Pynchon and the patron saint of cyberpunk, William Burroughs.

Gibson was the most elegant stylist of the group, and eventually became the most prominent and popular, but Bruce Sterling was the idea man, a conceptualist who always paid close attention to the invasive and intimate way technology changes not only societies but consciousness itself. Sterling's best work is a rare mix of rigorous scientific extrapolation and scathing social satire (most science fiction writers just do one or the other).

The titular Caryatids are daughters of a dead Balkan war criminal, sister-clones who've been scattered to the ends of the earth. The three sections of the book are each set in a different global sphere with a sister as the central character: Vera, an earnest Acquis helping detoxify a Mediterranean island, Radmila, a media star married into the power plays of the Montalban family-firm, and Sonja, a medic married to a tribal warrior in the Gobi desert.

If the globe-spanning action occasionally plays like a parody of a typical hard sci-fi novel, the depth of detail grounds Sterling's future in a palpable physical reality that most SF novels can't be bothered to describe. If he sometimes doesn't seem completely in control of his material, it's because he gives the reader too much: too many subplots, too many characters, too many ideas. This information overload is a conscious part of Sterling's aesthetic, though, and a reflection of the disordered world he describes, one constantly teetering on the edge of chaos.

Ultimately, Sterling could care less about a neat, ordered plot -- his impatience with storytelling conventions comes from his boredom with formula. If you're the kind of reader who reads genre fiction as casual comfort food, Sterling's not for you. But if you are similarly bored with most science fiction these days, The Caryatids is a tsunami of invention.