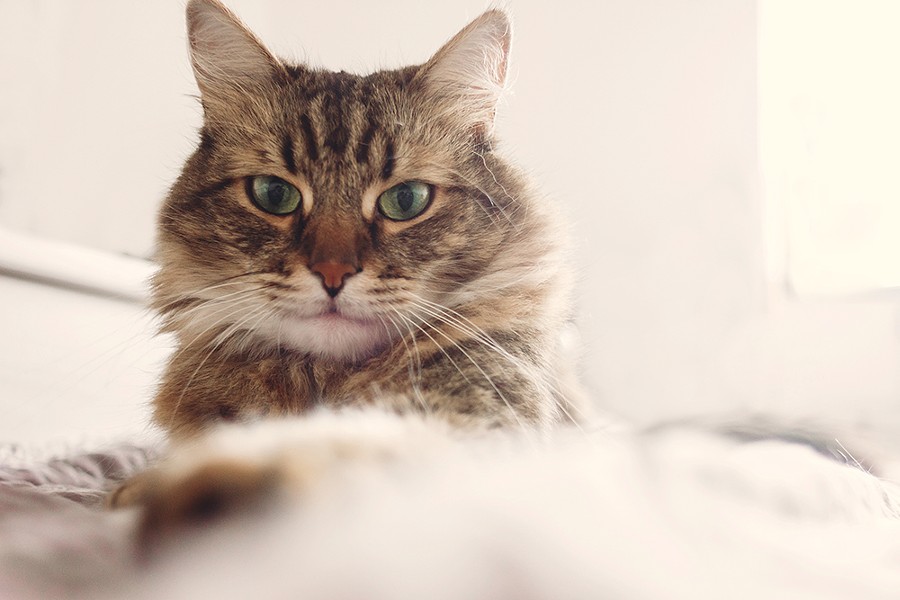 Good morning. You're probably wondering why I'm here, just a few minutes before dawn, with my full weight pressing down on your chest and my extended claws resting lightly on your neck. I'm hoping now is a good time to talk.

Despite the passage of nearly a year, it seems you're still holding onto some negativity regarding the damage that occurred to the sofa and the supposed "urine" that apparently made its way onto your suitcase and its contents before you went away for the weekend. Since you're unable to get over it, I would like to offer an apology.

I am a cat. Scratching, along with napping and knocking things off the counter, is my job. I scratch a lot of things and now and then, as I push myself to be the best cat I can be, I scratch the wrong things. (Things that could be more clearly marked, truth be told.) And as utterly ridiculous as it is to have to say it, I am willing to apologize to any couch owners who genuinely didn't want the foam core and cotton cushion batting torn out in hunks and strewn around the living room.

I mean, I have to keep my claws sharp. And I do an incredible job. I suppose if I have anything to apologize for it's working too hard to stay in top form, following too closely in the footsteps of my noble ancestors, heeding the very laws of Nature itself. If that's "bad," it's news to me and I guess I'm sorry. But you can't fault my results. Just look at these finely honed talons pressing into your skin.

Whoah, hey, language. If you can't maintain a tone of civility, you're just going to alienate everyone.

Also, this was a year ago. In cat years, it was 2014. Times were different. Scratching couches was not the big deal some people make it out to be today — you yourself bought a "shabby chic" distressed wood coffee table with chipped paint and worn surfaces. We were all just having a good time and to look back and judge the deep vertical gashes along both arms of the couch by today's fickle aesthetic standards is, frankly, nuts. Are we going to go back in history and condemn everyone who rendered large, expensive pieces of furniture worthless by sinking their claws into the fabric and pulling back to make an extremely satisfying sh-tuck! sound over and over again? Surely you see what a slippery slope that is. You know, the neighbor's Labrador has said he's ready to sit down and talk, and to forgive. His tail was going crazy. So think about that. Sh-tuck, sh-tuck.

(And FYI, I am not the only one in this house with talons. In fact, I have some information about the bird and its faulty cage latch. I'll disclose it when the time is right. Until then, it's not important, just know that there are vague, unverified facts vital to this case that you do not yet possess.)

As for the fluid (who can say for sure what it could have been) that may or may not have ever so lightly sprinkled your packed suitcase of easily replaceable and largely unflattering clothing in the hours prior to your departure, I can't say I recall any personal involvement. Nor do I remember it being, as you seem to with your constantly distracted human brain, particularly pungent. As far as I could tell from the windowsill, your airport shuttle driver's refusal to accept your suitcase was due to it being wet from your furious scrubbing — accomplished with more of that foul language, by the way. It looked to me like he was covering his mouth and nose with his shirt collar to spare himself from that awful orange scented crap you insist on spraying on the carpets. Honestly, one could argue peeing on the stuff is the only way to get rid of the smell.

Your jumping to the conclusion that I was the unseen tinkler was hurtful. It could have been anyone and any number of my enemies — the squirrels, the bird — could have set me up. (You have said over and over that birds do not technically urinate but come on. It just doesn't make any sense. I've seen that squawking fistful of feathers drink water.) In the course of the past year I have been persecuted, slandered and looked at askance, labeled a crude vandal. When you think about it, I'm the real victim here.

Despite the wet suitcase fiasco not being my fault in any way, I am willing to be the bigger mammal and take full responsibility. Yes, I, in my magnanimity, choose to suffer blame where I am blameless. And so I am willing to sit down and meet with your shuttle bus driver to offer my deepest regrets regarding the way events unfolded that day. Starting with your selfish decision to go away for the weekend with your stupid suitcase, with its weird hard shell that's almost impossible to climb and balance on, and the narrow zipper you have to aim at if you hope to get any liquid inside at all. Who needs a suitcase like this? Are you going to space?

And while I have you here, after giving you a moment to also apologize for how you handled things, I have an announcement which is not intended to detract from this conversation in any way. After a lot of thought and reflection, I've decided that, in the coming weeks, I will be committing myself to training the bird out of its disruptive and destructive behaviors to make our household a more pleasant one, where nothing that isn't totally asking for it is damaged.

Here, let it out of the cage and I'll show you.

Jennifer Fumiko Cahill is the Journal's arts and features editor. She prefers she/her pronouns and can be reached at 442-1400, extension 320, or jennifer@northcoastjournal.com. Follow her on Twitter @JFumikoCahill.