The CBD Burger and the Evangelist Editor

A match made in heaven 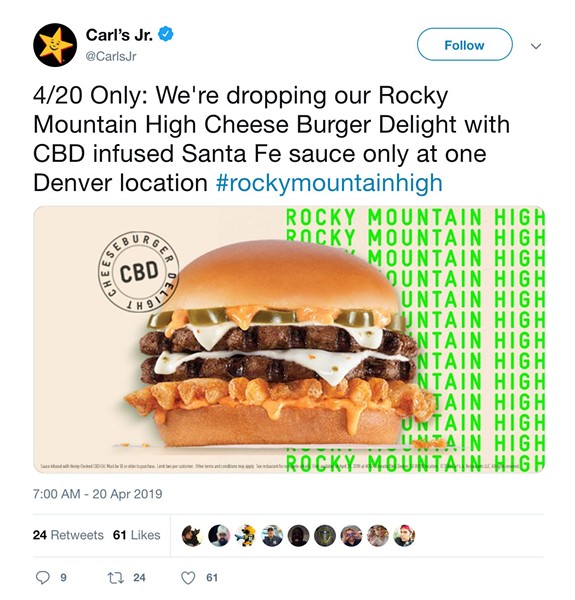 The CBD craze has officially come off the rails, veering into territory no wellness supplement should ever traverse. We reluctantly looked the other way as folks began infusing everything from lattes and cookies to personal lubricants and "immunity vaporizers" with cannabidiol, one of the more than 110 cannabinoids in cannabis plants and one that doesn't get you stoned.

Despite a veritable dearth of science on the effectiveness of CBD, people have decided the stuff can cure everything from stress and insomnia to cancer and chronic pain. Needless to say, they are pretty excited about the possibilities and since the Feds officially legalized industrial hemp and CBD late last year, CBD products have been popping up everywhere and it has now officially gone way too far.

Carl's Jr. celebrated April 20 by rolling out the Rocky Mountain High CheeseBurger Delight (Get it? CBD), which features two beef patties paired with a CBD-infused Santa Fe sauce, pickled jalapeños, pepper jack cheese and fries, all packed between a "premium bun." After all, what says wellness like a 1,000-plus calorie double gut bomb?

Now I don't care how bad your anxiety, arthritis or whatever else is flaring up, slathering a pile of lard and sugar with some CBD oil isn't going to help. And it isn't going to get you high. So, honestly, what's the point? Whatever it is, it apparently resonated in the Denver test market where Carl's Jr. rolled out this monstrosity.

Alex McConnell, the chain's district manager, told Leafly that the restaurant hosting the one-day-only promotion saw its parking lot packed with cars waiting for the drive-through before it opened at 6 a.m. (6 a.m.!!!!) The store reportedly sold more than 100 of the burgers in its first hour and nearly 300 by 9 a.m.

A Carl's Jr. executive told Bloomberg the promotion — which saw the burgers selling for ... wait ... wait ... you guessed it, $4.20 — was so successful that other franchises have reached out to corporate to say they'd also like to test the CBD offering.

Kind of makes one wonder when we're going to see that Vitamin D Famous Star, Echinacea Six Dollar Burger or the fish oil Big Carl. What's that you say? Oh, that just sounds dumb? Yes. Yes, it does.

Speaking of going off the rails and taking things too far, LA Weekly found itself trending on social media last week for all the wrong reasons. The much beleaguered alternative weekly apparently hired a "cannabis editor," Mike Miller, who penned a column introducing himself to his new readership for the paper issue that would be on newsstands April 20. (Quick side note: Miller's actual first piece for LA Weekly appears to have been a 1,000 word April Fool's joke about President Trump using his executive powers to legalize weed, which was somehow neither funny, believable nor informative.)

Miller's introduction to his new readers is really something and warrants a full read for anyone interested in cannabis media or journalism. In the piece, Miller offers the Cliffiest of Cliff's Notes global history of cannabis, relives his high school years, in which, he notes, he was fortunately "a freak of Jewish DNA, packing 200 muscular pounds into a 6-foot frame," waxes poetic about the bygone era of his youth when "danger didn't lurk around every corner" and reminisces about the "angst of feeling new feelings" while watching a nude scene in The Godfather sitting in a theater next to his mother. Seriously. Again, you need to go read this thing in its entirety.

But the thing I'd like to hone in on is Miller's claim that he's coming to LA Weekly as "both a journalist and its first cannabis editor and evangelist. My pledge is to provide content that informs, provokes and delves into the unbiased truth behind the headlines."

Dude, you can't be a journalist and an evangelist, and a reader certainly can't count on the latter to tell the "unbiased truth." And you definitely can't say that just a paragraph after spewing nonsense like this: "(Cannabis) is Mother Nature's Steve Jobs; celestially conceived to meet our bodies' built-in demand. Cannabis is no longer for 'high.' Cannabis is for 'health': physical, mental and spiritual." He goes on to claim that "contrary to stigmatized myth, the average cannabis consumer is over 45 years of age, works full-time, earns $70,000-plus, is physically, creatively and socially active, and consumes more with others than alone," but cites no source because, you know, evangelism.

This is the journalistic equivalent of a greasy CBD cheeseburger. Both make me want to scromit.

Thadeus Greenson is the Journal's news editor. Reach him at 442-1400, extension 321, or thad@northcoastjournal.com. Find him on Twitter @thadeusgreenson.