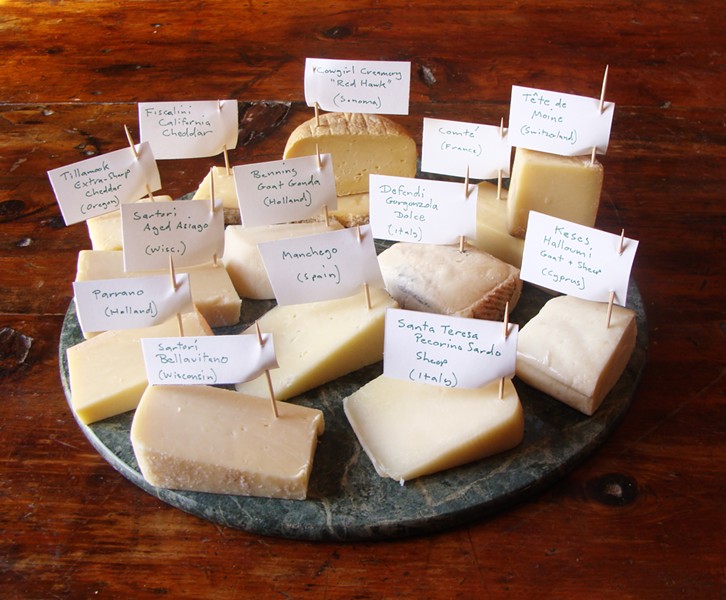 photo by Darius Brotman the cheeses

I have been known to throw fits about cheese, citified, hoity-toity fits that publicly I eschew and privately I pursue, defending my position alone in my head for hours. We who live in this veritable cornucopia of verdancy, overflowing with local organic meat, produce, grains and dairy, we who positively wallow amidst plump, cream-producing cows, are shockingly bereft of local artesanal cheese.

I adore Loleta Cheese Company's Sharp Cheddar, yes, and I admire Cypress Grove very much, but have you been to Vermont lately? You can't throw a brick with out hitting a tiny dairy that is producing a completely new washed-rind raw milk cheese like the buttery oozy Dorset from Consider Bardwell Farms, or Constant Bliss, a bloomy-rinded self-descriptive cheese from Jasper Hill. There are thousands of them, inventing new cheeses every season.

Totally ... new ... cheeses!! And here we are drowning in surplus local milk from grass-fed cows, totally unable to hop the glistening bandwagon of cheese miracles lining the pockets and the palates of many an Eastern dairy.

That's my New York City rant. Returning to my local roots as an Arcata girl, I have accepted the situation after several years of internal rage, and decided to see what wonders could be worked, cheese plate-wise, with what's on offer at our local stores.

The cheese counters at Eureka Natural Foods, the Arcata Co-op and Wildberries all offered a very similar selection (except for the Keses Halloumi, which I only found at E-Nat). I definitely found enough interesting cheeses to make a tasty plate, and was heartened to find some excellent cheeses that were new to me.

(Side note: My pop brought back some gorgeous Red Leicester from Costco recently, which is an unusual cheese to find stateside. It's a cheddary firm cow's milk cheese from England, mass-produced but very good, with a nice orange hue. The Costco price made it even nicer. Costco has a decent selection, including a Comte that is just as good as grocery store Comte, but for a lower price.)

Not all was well in cheeseland, however. At the Co-op and Wildberries I found cheeses that desperately needed to be recut and rewrapped, or simply just tossed. For example, a wedge of the Swiss classic Tete de Moine at Wildberries had been wrapped and labeled nearly seven weeks prior and was hopelessly ammoniated (i.e. spoiled and smelled like ammonia). When buying, be very careful to check the dates, and don't hesitate to return any cheese that appears overly "bloomy" (white patches on the cut surface) or smells like ammonia. I implore cheese-counter workers to rotate and rewrap cheeses far, far more often. Eureka Natural Foods did not even include a "packed on" date on theirs! Not so cool, bros.

All three stores suffered from a general lack of imagination cheese-wise; maybe obscure Michigan cheeses are too much to ask, but a few more French classics? Or Portuguese, there are lots of Portuguese folk around. Portugal is the only country to use milk thistle to coagulate their cheese (Serra, a sheep's milk cheese, being my favorite)! Could someone please have the chutzpah to branch out!

That being said, I found a number of lovely cheeses, certainly enough to make a nice holiday selection. No one cheese department in town stands out (they could all be more adventurous and thoughtful), but there are some decent options.

If you are not going to eat your cheeses for a week or more, remove the plastic wrap and rewrap, first in wax paper, then in plastic, and refrigerate if it isn't going to be consumed within six hours. Soft cheeses typically should be eaten within 10 days; hard cheeses can keep much longer, provided you re-wrap and clean, by scraping off any bloom and cutting off any discolored bits every few days.

If a cheese you want is out of stock, ask a cheeseworker to reorder it. If you cannot find a small enough piece, ask them to cut a larger piece down. I often do this with the more expensive cheeses. I encourage cheeselovers to develop a relationship with their cheese counters; if they don't stock a cheese you'd like to try, request it. If you enjoy a cheese, let them know. If a cheese has been improperly cared for, return it and inform the cheese manager. Our passive cheese consuming is what has led to unexciting selection and variable quality. By letting stores know we are engaged and active cheese enthusiasts, we can hopefully improve these conditions.

Another American Cheese Society Winner. A good melter. Sharp and sweet, like a sharp Gouda. Firm, creamy and scrumptious. MY BEST LOCAL FIND.

Sharp and crumbly as Asiago should be, but a bit less dry than usual. Creamy with caramel and apricot notes. Good with fruit, or grated and used like Parmesan.

Here's what we do: buy a wheel, leave the packaging in situ, put in back of fridge and open after at least one year, preferably two or three. Crystally sharp heaven.

This cheese normally is delicious, but the piece we got was three weeks old and hopelessly ammoniated.

Fine but unexciting washed-rind semi-soft cheese. Not the most flavorful Manchego. I prefer Zamarano for sharp medium-price Spanish sheep cheese or Urgelia, another cheap and delicious Spanish cheese that's not available locally. Grrrr.

All goat Goudas are good. This one is no exception: caramelly, lush, berry undertones and cheaper than Midnight Moon.

One of the best cheeses ever, except at Wildberries it was sold nearly seven weeks past cutting, and was browning and slimy from being trapped in plastic without rewrapping. The pieces at the Co-op were also inedible at four weeks without cleaning and rewrapping. A great pity.

This is the best Halloumi in town, due to the milk combination. Absolutely delicious. Slice, dip in flour, fry in butter and serve with lemon.

Prices shown accurate as of Dec. 1.