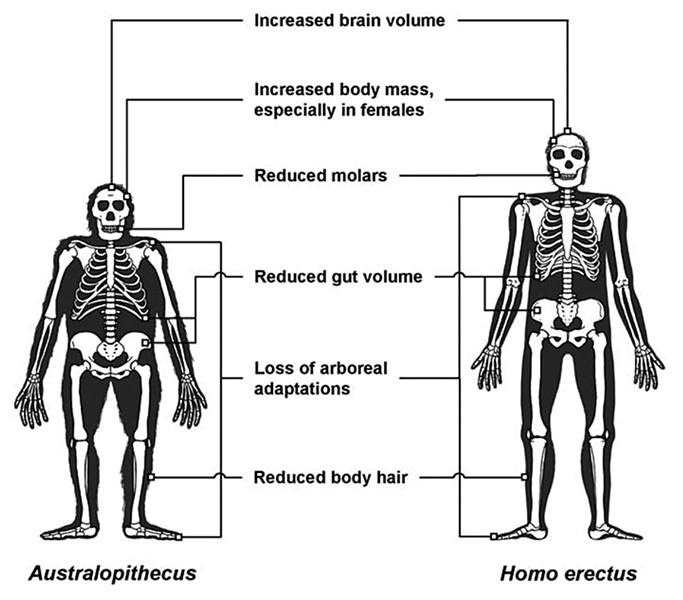 Courtesy of Richard Wrangham and Rachel Carmody Cooking may have driven the evolution of human-looking Homo erectus from ape-like Australopithecus.

Ape. That's what you'd have thought if you met one of our ancestors two million years ago: short stature, low brow, massive jaw and mouth housing huge teeth, small brain, flared ribs enclosing a big belly, slouching gait, tree-climbing anatomy — all the hallmarks of a bipedal ape. Fast forward to 1.7 million years ago, put your great-great-great ... grandfather into an off-the-rack Brooks Brothers suit (which would fit him just fine) and you'd think, human. What happened during that comparatively brief 300,000 years to morph our forebears from chimpanzee-like "habilines" (Australopithecus habilis and Homo habilis) to human-like Homo erectus? Richard Wrangham, professor of biological anthropology at Harvard University, has a one-word answer: cooking.

Wrangham's thesis is that around 1.9 million years ago, during the early Pleistocene period, our ancestors learned to control fire, which until then had been a hit-and-miss event. Lightning-initiated fires on the African savannah were irregular phenomena, but at some point our habiline forebears figured out how to start a fire (probably with sparks produced by striking pyrite rocks with flint). Fires, even without cooking, would have had an immediate impact on their lives, allowing them to sleep on the ground, for instance. Until then, they'd have slept in trees to avoid predators, as most apes do today. But when one of them accidentally dropped a slab of meat into a fire — the first barbecue — that's when the transition from ape to human really got underway.

Cooked meat is essentially pre-digested, since heating denatures protein, allowing stomach enzymes easier access to animal food. Gelatinizing starch by heating it also helps digestion. Although present-day humans can live on uncooked food — just — our bodies are thoroughly adapted to a cooked diet. For instance, our chewing teeth (molars) are small compared with all other primates vis-à-vis body size. Similarly, our mouths are tiny, our jaw muscles weak, our stomachs small and our colons short: all the result of cooking, according to Wrangham. He points out that the great apes have to eat twice as much as humans because one-third of their food is indigestible fiber that gets excreted; in humans, it's less than 10 percent.

Today, other than raw foodists, everyone everywhere cooks their food, and for good reason: energy. It takes much more energy to digest food that is (1) hard, tough and dense, (2) cold, (3) in large chunks, like animal meat. (As it is, our metabolic rate rises about 25 percent after eating.) But cooking doesn't just give us more energy, it gives us more time. Other primates typically spend most of their waking hours chewing. Wrangham estimates that, absent cooking, humans would be spending about six hours a day just chewing (and the rest of the day hunting and gathering). As it is, we spend less than an hour a day actually eating.

Once our forebears no longer needed all that high-powered, energy-intensive, machinery for mastication and digestion, our bodies "humanized" — our teeth, jaws, mouths, stomachs and colons got smaller, while our brains capitalized on the surplus energy made available by cooking. Brains are calorie-guzzlers, accounting for 20 percent of the calories we burn, yet weighing only 2 percent of our total body weight. Those extra calories grew brains: The cranial capacity of (non-cooking) habilines was about 37 cubic inches; that of (cooking) Homo erectus was around 53 cubic inches. Meanwhile, body weight nearly doubled, from about 75 to 135 pounds. So that's the theory: Cooked food led to shrinking everything except our brains, which eventually doubled in size to our present average of 73 cubic inches.

Next time, I'll discuss some ramifications of the cooking revolution, including how we learned to socialize and make nice.

Barry Evans (barryevans9@yahoo.com) is a consummate team player when it comes to dining, enthusiastically eating what others cook.