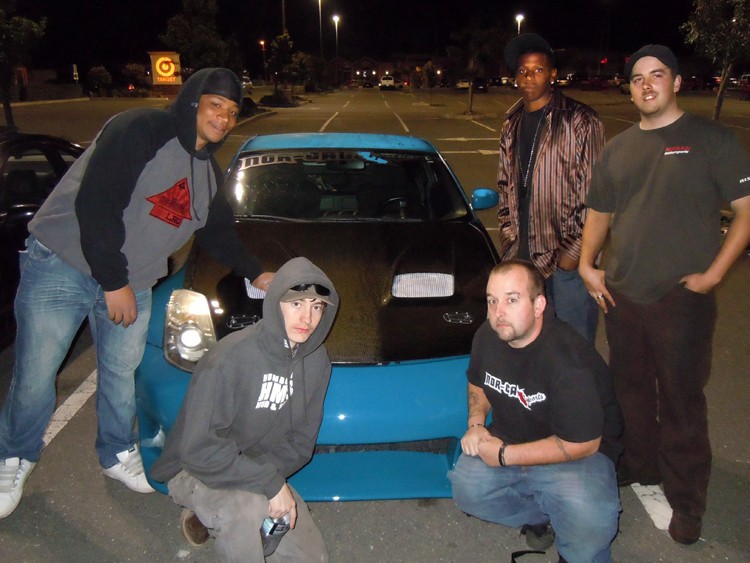 So there you are, schlumping your way home late after work on the 101 corridor in your homely old Honda -- groceries in the back, evening sun in your eyes, list of to-do-nexts on your mind. Passing by Target as you enter Eureka, you once again notice the handful of young guys in the parking lot huddled around some slick little cars, a few peacock bright.

What the heck? They were there last Wednesday, too. And the Wednesday before that. In fact, they've been a Wednesday special for years.

Those who finally detour into the lot to meet these guys might find a new religion: car modification. OK, maybe religion is the wrong word. Hobby. True love. It's Nor-Cal Imports, a Humboldt County-based auto club started six years ago by Jamal Wyllie of Eureka. The club meets Wednesdays from 7:30 to about 9 p.m. to talk about cars, modifications and upcoming cruises, races, parades and other events -- like the Rhody Parade in the spring, and Cruz'N Eureka, which is coming up this weekend. (See Calendar.)

Last Wednesday, about half of the 15-some club members had gathered in the low evening light. In the distance, shoppers were still making after-work forays into the plastic-scented, colorful kaleidoscope of Target.

Wyllie, who's 30 and vice-president of the club, was there with his 2006 350Z Nissan; Brad Adams had his shiny black 1995 Acura Integra and Rick Arnold his boxy, matte-purple 1990 Honda Civic. Soon Hakim Wyllie, Jamal's younger brother and president of the club, arrived in a gleaming Lincoln that he parked away from the other guys' cars; it was just his transportation tonight, because his sporty car was in the shop.

Hakim Wyllie, who's almost 29, walked over and showed me a smart phone picture of his lime green Mitsubishi Eclipse GSX, the one in the shop. "I bought this car from a friend, bone-stock-off-the-lot," he said.

"It was silver," Hakim continued. "I painted it in my garage in McKinleyville." And he did more, lots more. "My car is one of the few total-package vehicles -- everything is customized, from the sound system to the lighting to the body kit to the interior. ... The frame's original."

The Wyllie brothers grew up in Eureka, where their parents moved from Redding when Jamal was nearly 2. Their dad, originally from Trinidad and Tobago, met their mom, who is from Haiti, in New York; he had moved to the city to train in shot put for the Olympics. They moved west, and then west again, in search of a yet smaller town and bigger trees.

Jamal got modification fever when he was 16 and driving his first car, a Chevy Cavalier. One day he saw his best friend's car, and noticed it had a weird front end.

Lambo is short for Lamborghini.

Hakim got into it, too, and like Jamal races his car. When he was 18, he wrecked his Plymouth Laser -- going the speed limit, he says, but riding on bald tires --on a slick road by the golf course. The impact into a telephone pole snapped his neck. He lifted his collar aside to reveal the dark horizontal scar across his throat.

"Check out this guy," said his brother. "Wrecks his car, breaks his neck. Most people would give up, have nothing to do with cars. Or get an SUV -- something big, you know. But no, this guy, he's all Rocky and comes right back at it."

The other guys kicked around, listening to the conversation, or wandered off to talk quietly by their cars. They have their stories, too. But why this club, this hobby -- what's the draw in taking a sometimes already spiffy little car and souping it up?

"A car is what represents the person -- the attitude of this person," said Jamal, who was wearing jeans and a gray and black sweathshirt with the hood pulled up. He's friendly and gets animated when he tells a story, his voice rising, his laugh becoming more frequent. His car seems a little flashier than him, but he explained its connection to him well. "It's Laguna Seca blue -- a cool color. It's blue, it's nice and slick. And I'm nice and slick." He laughed. "Some cars look more aggressive. What's me in this car is these smooth curves, showing my freedom, my positive attitude."

"I just like to be unique," said Hakim, who, unlike the T-shirted or hoodied rest of the guys, wore a shimmery long-sleeved dress shirt with copper and black vertical stripes, and large sparkly studs in his ears. "Why drive the same stock everyone else does?"

Although the club's name has "Imports" in it, the club doesn't discriminate -- any car, American or foreign, sports or muscle, is welcome. The club's even forming a Nor-Cal VIP sub-club, for folks with more luxury rides, like Hakim's Lincoln -- which he plans to modify, of course, by putting on some 22s (tires), for starters.

Part of the joy these club guys find is in the work itself -- taking a regular car and fixing it up -- and in what they do with their cars afterward. Some team members race on tracks run by the National Auto Sport Association, an organization that holds races for different classes of cars and drivers, trains drivers, promotes rallies and supports clubs. Jamal has raced at Thunderhill (near Chico), Laguna Seca and Sonoma, so far. He said the club works to keep street racing off the streets and, instead, on legal tracks, like the Samoa Drag Strip out on the peninsula.

"We want to show kids around here it's OK to race a car, but they should go do it in a safe environment," he said.

Perhaps the greater joy of being in the club, however, comes from the closeness that forms among members and their families.

"Everyone helps each other out, teaches each other things about cars, works on each other's cars," Jamal said.

"I make 'em run, too," said Adams. "I'm going to CR to get my automotive associate's degree. I love cars, but I hate paying shop labor and I like helping other people."

"Nobody has touched my cars except my team members," said Arnold.

"My green car, these guys changed my suspension," said Hakim.

"It took like 20 minutes to half an hour," said Adams, "versus all day in the shop and paying a fat labor bill -- which probably would have cost twelve- to thirteen hundred."

A black, tough-looking car circled around them and stopped. The driver leaned out the window. "This a car club?"

The guy nodded. Asked a couple more questions. And drove coolly on.