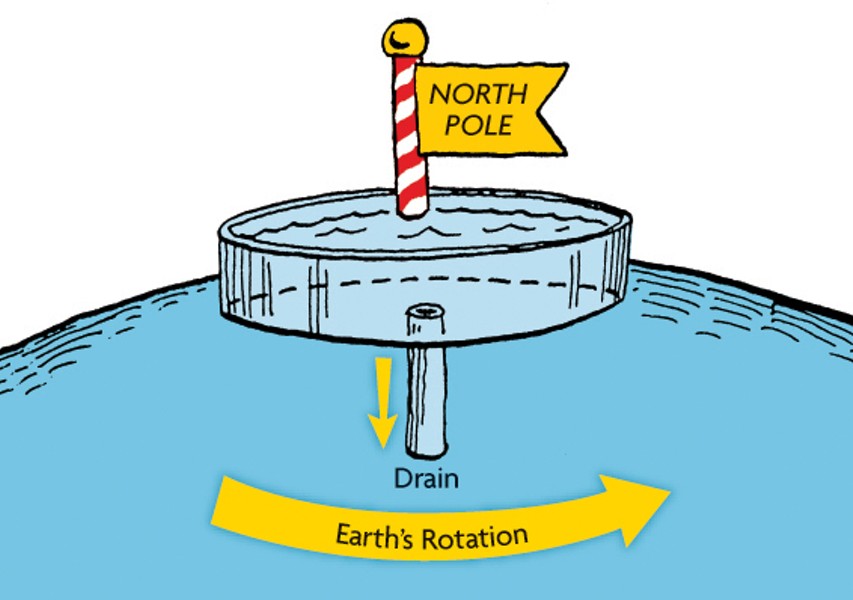 Despite popular belief, you really can't predict which way your bath water will swirl when you pull the plug by knowing which hemisphere you're in. Because the Earth is spinning counterclockwise (as seen from above the North Pole), it's reasonable to assume that your bath water spirals counterclockwise when you're north of the equator, and vice versa. After all, winds in the northern hemisphere veer to the right, as do artillery shells and intercontinental ballistic missiles. They are all at the mercy of the Coriolis effect, which can be understood by imagining what would happen to a big tub of water sitting right over the North Pole (see Figure 1).

The water at the edge of the tub is moving with the Earth counterclockwise around the pole. Pull the central plug, and the momentum of water moving from the outside to the center makes it to drift to the right, resulting in a counterclockwise spin. If you move the tub away from the pole toward the equator, water on the side farthest from the pole is always going to be moving a little faster than water on the side closest to the pole, so you'll end up with a net counterclockwise rotation anywhere in the northern hemisphere. In the southern hemisphere, the reverse is true.

The trouble with relating this to your bathwater is that you're dealing with a minuscule difference in velocity across the width of your bath, and the tiny Coriolis effect is going to be swamped by your body, your breathing, the shape of the drain pipe, previous motion of the water, air blowing over the tub and so on. It takes carefully controlled conditions to confirm that water going down a drain really does obey Coriolis. In the mid-’60s, experimenters at the University of Sydney, Australia, allowed water in a six-foot diameter circular tub to settle for several days in a vibration-free room. When the plug was pulled (from below, to minimize turbulence), sure enough, the Aussie researchers, to quote their slightly tongue-in-cheek paper, "...acquired confidence in the hypothesis that carefully performed experiments on liquid drainage from a tank will show clockwise rotation, if done in the Southern Hemisphere."

Winds (moving air molecules) are also subject to Coriolis forces. If the Earth didn't spin, prevailing winds would be from the north or south, depending on latitude -- starting with warm air rising at the equator (left side of Figure 2). However, the Coriolis effect deflects wind to the right in the Northern hemisphere and vice versa, producing the surface winds (right side of Figure 2). This results in the demographic phenomenon, in temperate climates, of the poorer sections of many cities being located east of downtown, where (smelly) industry is, or was, to be located. Other factors being equal, people who could afford it built west of the downtown area. Check out London, Paris and Dallas, for instance, and you'll see what I mean.

Barry Evans (barryevans9@yahoo.com) wonders why clocks in the southern hemisphere don't go counterclockwise. The collection of his first 80 Field Notes columns is available directly from him or from Eureka Books.