The Cost of Wind

Terra-Gen An artistic rendering of what the turbines will look like from the town of Scotia.

Give me the restless power of the wind," wrote lyricist John Hall in an anthem about renewable energy popularized by Peter, Paul and Mary. The phrase evokes sails billowing in the wind, or maybe a cooling breeze on a hot summer's day. But in reality, wind energy on a scale large enough to power an entire community requires an industrial facility with machinery, roads and dozens of turbines that can stand up to 600 feet tall — and a lot of land or ocean water — to site them on.

This reality has been brought home to Humboldt County residents by several proposed wind energy projects over the past decade. The first, the Shell Bear River Ridge wind energy project, was soundly nixed by residents when they learned that over-sized trucks would be traveling through downtown Ferndale. Last month, a plan to bring offshore wind energy ashore was denounced by fishermen, who pointed out that large portions of the area's fisheries might be made unavailable to the local fleet. The most recent wind energy proposal, brought forward by the San Diego-based Terra-Gen, which has already placed hundreds of wind turbines in Kern County, was discussed on May 28 at a public gathering in Ferndale's Old Steeple.

The project, if approved by the county's planning commission, will place up to 60 wind turbines on top of two prominent ridges — Bear River Ridge and Monument Ridge, located south and east of Fortuna. It is being opposed by many members of the environmental community, the Wiyot Tribe and some local residents concerned about the project's effects on their viewshed.

Terra-Gen project liaison Natalynne DeLapp, who formerly served as executive director of the Environmental Protection Information Center and currently works as operations director of the Humboldt County Growers Alliance, outlined the proposed facility and the mitigations the company is prepared to make to reduce its likely impacts.

Approximately 100 people filled the stained-glass-decorated interior of the former church and, judging from the tenor of the questions and remarks, many were not happy with the project. Aided by Stantec Consulting Services senior biologist Yasmine Akky and Terra-Gen director of permitting Kevin Martin, DeLapp gave a 40-minute presentation on the project plans, using numerous slides, armloads of statistics and referring frequently to the project's lengthy Draft Environmental Impact Report (DEIR).

The project, DeLapp said, is designed to reduce California's dependence on natural gas and reach the goal of 100-percent renewable energy by 2045. Humboldt currently buys about 65 percent of its electricity from the grid and produces the rest locally, mostly through the natural gas-powered Humboldt Bay Power Plant, though Redwood Coast Energy Authority has adopted the goal of the county attaining all its power through renewable energy by 2025. It could purchase the renewable energy from other providers throughout the state or buy some from the Terra-Gen project, if it is approved and built.

DeLapp said Terra-Gen selected Humboldt County because it is windy, has available substations "and the ability to get permitted." Rainbow Ridge and Shively Ridge were initially considered but ultimately rejected because of too many biological impacts. Monument Ridge and Bear River Ridge are owned by Humboldt Redwood Company and Russ Ranches, which are both willing to sign leases with Terra-Gen. 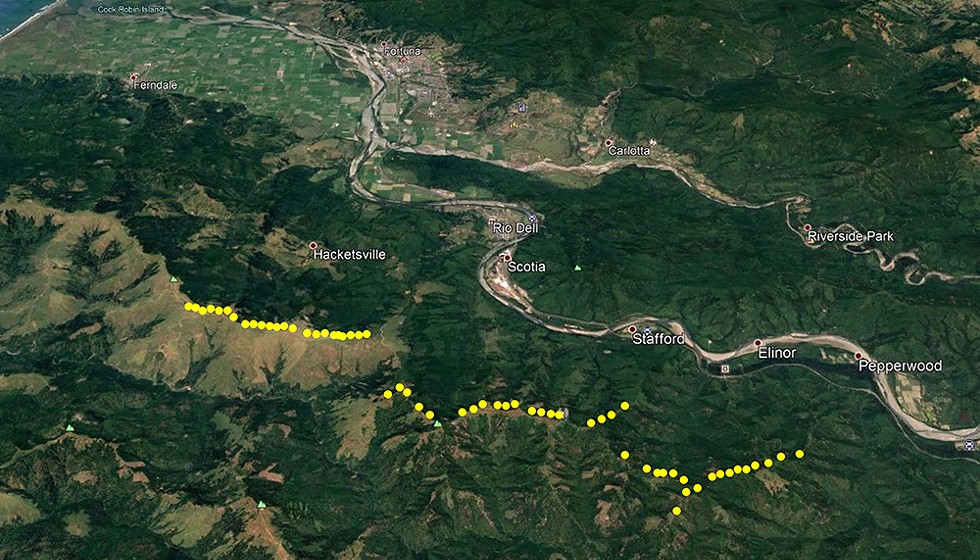 The project is designed to produce 155 megawatts of energy. Because the wind blows irregularly, the turbines will only operate about 40 percent of the time and the electricity they produce would be plugged into the grid at the Bridgeville substation, 24 miles to the east of the project site. Power loss along the transmission lines would reduce the wattage to 135 megawatts, which is the maximum capacity the Bridgeville substation can handle. This, DeLapp said, eliminates the possibility of expanding the wind project at some later date.

She estimated that the project could supply 36 percent of the county's electricity needs, but less than 1 percent of those of the entire state. It would, however, make Terra-Gen the second largest taxpayer in Humboldt County.

If the project is approved, the turbine components will be barged in through Humboldt Bay to Fields Landing, where they will be transferred to large trucks and driven down U.S. Highway 101 to an area near Redcrest, called Jordan Creek Road. Old logging roads would be re-built to bring the project traffic to the ridge tops.

DeLapp showed visual simulations of what the turbine-festooned ridge tops would look like from different vantages 5 to 7 miles away. From many of the viewing sites, the turbines were invisible. From others, they showed as faint outlines against the sky.

There are still many unknowns about the project, even though the DEIR has already been written, including the exact locations of the turbines, the number of turbines, and their heights and sizes. DeLapp emphasized that the DEIR had been written to address the maximum possible impacts, even though it was unlikely that those would be reached.

A great many questions were asked at the meeting, many of them having to do with the project's effects upon the plants and wildlife on the ridges. Monument Ridge is heavily forested and Bear River Ridge is open grassland that supports many raptors.

Marbled murrelets, an endangered species, could be impacted, as could northern spotted owls, bald eagles, golden eagles, bats and a variety of other organisms, including condors, once they are reintroduced locally.

Akky estimated that 20 murrelets could be killed over the estimated 30-year life of the project. She said that mitigations have been created to compensate for these losses, both of the murrelets and of other wildlife, and they were described in the DEIR but did not detail the mitigations.

DeLapp pointed out that the land had been used by both Pacific Lumber Co. and by cattle ranchers and is consequently far from pristine. One could also argue that trees growing on land owned by a timber company will not stand indefinitely.

Other questions were asked about the economics of the project, which will cost about $200 million, according to DeLapp and Martin, paid for by Terra-Gen's parent company, Energy Capital Partners, an asset management company.

"The only public funding would come in the form of a tax write-off to the company on the gains," DeLapp said.

Martin added that Terra-Gen did not get any funding from PG&E.

"We write checks to them," he said.

It's also worth noting that nobody in Humboldt would see a reduction in their PG&E bill as a result of the Terra-Gen project.

These economics aside, an audience member asked how much would it cost to install solar panels on every rooftop in Humboldt County.

(The Board of Equalization shows 35,845 single-family residential homes in Humboldt County, which would make putting solar panels on every Humboldt County rooftop cost about twice what DeLapp said.)

Questions were also asked about roads. Martin explained that a 200-foot corridor would be cleared to permit roadways to be built but that the actual paved roads would be 24 feet wide. No herbicides would be used to keep the corridors cleared, he said.

The project would bring about 300 temporary construction jobs into the county but only 15 permanent jobs, and these would go to skilled workers who are experienced with wind turbine operations, and would likely be brought in from other areas.

Some audience members asked questions about the tax credits that would be lost or diminished if the project were to be delayed. At first DeLapp insisted that a delay would not hurt the project. Tax credits, she said, would be diminished but not lost altogether.

"The project is still financially viable if it does not begin construction this year. It is not such a flimsy project that it would be immediately stopped," she said.

However, toward the end of the meeting, to get a definitive answer Martin phoned Terra-Gen's vice president of development, and came up with a more ambiguous answer.

"Nothing has to be started this year to receive the tax credit," he said. "If it is not operational by the end of next year, this drops off. ... So does it not get built? Absolutely not. We take other routes."

Since the project, according to DeLapp, will take 14 months to construct and the project "would need to be transmitting electrons by December 2020", construction would have to begin this October to make that deadline.

DeLapp clarified after the meeting that the project would still move forward if the company misses the tax-credit deadline but would be more expensive and those costs would ultimately be passed on to energy customers.

At several different times, audience members asked why a project, which would have such a small net contribution to California's energy needs, should be allowed to have such major impacts on Humboldt's ranges and ridges. Project proponents replied that this is a social question and urged the audience to make comments to the Planning Commission, which will review the project in July.

In the meantime, anyone willing to sift through the 800-page DEIR to find answers to their questions, can find the document at www.humboldtgov.org/2408/Humboldt-Wind-EnergyProject.

Comments can be emailed to CEQAResponses@co.humboldt.ca.us but must be received by June 14.