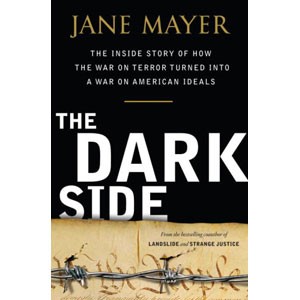 Jane Mayer has produced a terrible, wretched testament of United States policies on torture during the last seven years in her new book, The Dark Side. The text exposes for public reckoning the directives and specific cruelties exacted in the name of national security.

It is a strangely dispassionate read given the subject. At moments when Mayer could write in bold or italics instead she reports the stuff of nightmares with barely a hint of outrage. The Dark Side sticks to the historical record of George W. Bush and Dick Cheney's reworking of presidential powers to justify capture, detainment and torture.

Evidence of endemic criminality and global war-making will be the markers of the eight years of the Bush administration. The framework used to circumvent international law to develop secret torture facilities, build a massive prison at Guantánamo Bay and populate it with citizens kidnapped from nations the U.S. was not at war with will be long-term hindrances to global peace and justice.

Mayer describes how executive branch directives to the CIA and the military developed a mechanism for the application of callous brutality. Using foreign bases that are famed for cruelty, the United States outsourced torture to prisons in Egypt, Morocco, Syria, Jordan, Uzbekistan and Afghanistan. Not to mention creating a near invisible squad of snatch-n-grab CIA goons who hijacked perceived terrorists. Or the development of trained interrogators who subjected people to years-long bouts of deprivation and pain once the U.S. torture facilities were up and running.

Worse still are the trickle-down commandments for "enhanced interrogation," "golden shield" memos to protect torturers from future criminal prosecution and the twisted re-articulation of a torture resistance program into a torture refinement program.

Guantánamo Bay and Abu Ghraib have become known worldwide as the locations where the most refined and long-term methodology of terror has been put into operation. The Dark Side outlines the complicity of medical officers, military trainers and academic psychologists who helped to keep patients alive as they developed new psychological terrors and refined practices of pain. Thanks to Jane Mayer, we have a strong trail of evidence to mark just how grim the "war on terror" has become.

It will be curious to see the legal shenanigans used by the Bush Administration during the final days of its reign. I suspect we'll hear bizarre justifications for some serious shredding, and claims of promises of legal immunity for underlings with blood on their hands. Videotapes of interrogations where detainees were water boarded, deprived of sleep, punched and denied bathroom breaks until they soiled themselves will be hard to view, even when the tapes come wrapped in an American flag.