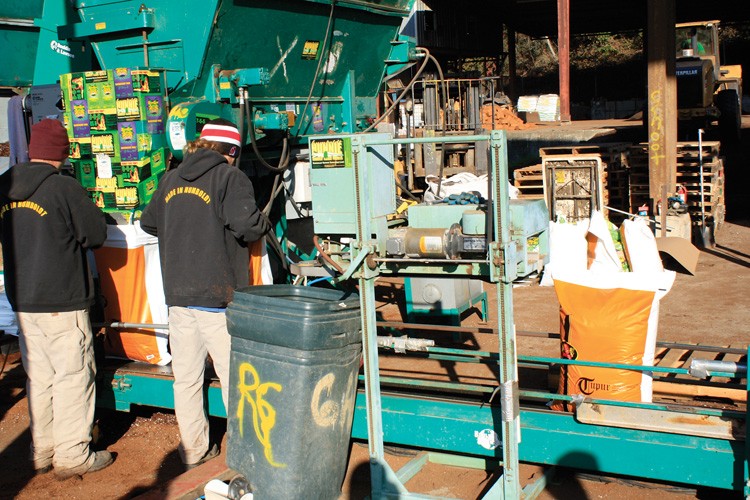 Chad Waters and Chip Baker wander around a sprawling complex behind the Murphy's Market on Glendale Drive in Blue Lake. They point out a pile of compost, a plastic earthworm farm, a heap of coco fiber. Forklifts and loaders lumber past, puffing white exhaust in the crisp morning air. They are the microbrewers of soil, and this is the brewery.

Waters and Baker own Royal Gold Soils, one of at least four local companies that package soil.

People all over the country buy soil from Humboldt, no doubt hoping that some of the region's renowned green thumbery will rub off on them. The success of Humboldt's soil entrepreneurs demonstrates the potency of both the Humboldt name and the local marketing chops -- particularly since much of what's in the bags doesn't come from Humboldt at all.

For non-gardeners, the soil we're referring to comes in plastic sacks, often labeled with bright colors and hippie motifs, and can be found at gardening, horticulture and hydroponics shops throughout the country. There are different kinds of soil for different stages in the plant lifecycle, and for different plants and their varietals. The bags promise staggering growth, excellent flavor and generally mind-blowing plant health.

To be clear on the terminology: "Soils are naturally occurring bodies on the Earth's surface," said Susan Edinger Marshall, a wildland soils professor at Humboldt State University. "Strictly speaking, [these products] are nursery mixes." Humboldt's actual soils -- the stuff the redwoods grow in -- are mostly mineral-based, or inorganic, while Humboldt's packaged soil products are primarily organic.

Whether you're growing grapes in a greenhouse, roses in a raised bed, or weed way back in the hills, your requirements for soil will be different than what is naturally available, says Marshall. Thus the packaged soils, or nursery mixes.

Unlike their free-roaming brethren, plants in pots have limited space for their roots, which is a major disadvantage. Potted plant growers compensate by focusing more nutrients in the space they have, often with the help of packaged soils that provide better drainage or more minerals of one kind or another.

By volume, sphagnum peat moss and coco fiber are the biggest ingredients in local packaged soils. They're both great as a base -- they're light when dry and can soak up and hold a lot of moisture when wet. Coco fiber is a waste product in the sub-tropic textile industry, and is shipped to Humboldt from India, Sri Lanka, Mexico, and the Philippines. Sphagnum peat moss is non-renewable, and is found in bogs throughout the world. Much of the moss packaged here comes from Canada.

Then you've got your Norwegian kelp meal, your Indonesian bat guano, and your various fertilizers from around the world. So what ingredients of the mixes packaged here in Humboldt are actually from Humboldt? Royal Gold uses local forest humus, compost and earthworm castings, said Waters. He also gets perlite from the San Francisco Bay Area and lava from near Clearlake.

"That's why you see so many [soil] companies emerging up here," he said. "We have the knowledge and we have the customer base."

Green Future is the newest and smallest of the local soil entrepreneurs with just six employees, while FoxFarm is the oldest and biggest, with more than 50 employees.

Humboldt Nutrients does use some local ingredients, said employee Natty Joyes, but she said that giving out any specific examples could endanger trade secrets. (Humboldt Nutrients' Humboldt Soil brand is not actually packaged in Humboldt County. Joyes said trade secrecy prevented her from sharing the packaging location, but it's definitely not here.)

So if soil producers are using ingredients that could easily be imported and assembled elsewhere, does something else set the local stuff apart?

Company owners tout their quality control -- smaller batches make contamination from gnats, fungi or pathogens less likely, they say -- and their connection to the consumer. "We're so close to our customer base that we're going to hear about it if there's something wrong with our product," Tone said.

At Northcoast Horticulture Supply in McKinleyville, warehouse manager Nate Fontaine said Humboldt is lucky to have an array of local soil companies. The same bag of soil that locals can get for $10 sells for $20 or $30 in other parts of the country, he said.

In general, however, he said that all the local soils are pretty comparable, and choosing between them really comes down to personal preference. "Soil's kinda soil," Fontaine said.

Branding, on the other hand, is very important.

"There's no way in hell I'd be seen walking out of the gardening shop with 420-brand soil over my shoulder," said Genevieve Schmidt, a local professional gardener. "I think that a lot of the new brands and the local soils coming out, they're really for pot growers." She added that she's never encountered Royal Gold or Humboldt Soil in a client's flower beds. "The Rastafarian color scheme, does that have real crossover appeal to the middle-aged gardener?" she asked.

For any small business, it's important to know your customer. In Humboldt, that means hitting the correct redwoods-to-marijuana ratio. If you want mainstream appeal, skew toward the redwoods. If it's the growers you're after, then put the Humboldt origins out front with some bright colors and Irie imagery.

FoxFarm avoids openly acknowledging marijuana, even on its line of liquid fertilizers, as does Green Future Soil Products. Royal Gold occupies the middle ground. Baker said that the artwork on the company website -- lions rampant set against a black, gold and red background -- was not intended to evoke stoniness, and is instead in reference to Dutch football club Ajax and the colors of classic cars.

Then there's Humboldt Nutrients. Dial its number, and after choosing between extension 4-1-9, 4-2-0, or 4-2-1, you hear, "HEEEEY! It's me, Marlon Asher!" While you wait for someone to answer the phone, the reggae artist sings you a version of his hit "Ganja Farmer" with the lyrics changed: "Deep down inna de redwood where de plant de herb tree -- Humboldt Nutrients for de best of kali tree!"

The overt tone seems to work. Humboldt Nutrients sells its Humboldt Soil brand all over the country and in Europe. In Anchorage, Alaska, Carter Marvin recently bought several bags of Humboldt Soil for his indoor garden. He was attracted by the bag's bright colors -- and by the name. "People identify Humboldt with growing," Marvin said. He said he feels a little cheated now that he knows the soil wasn't packaged in Humboldt, and that many of the ingredients aren't local. "That would be like if you had an ‘Alaska-Grown' sticker on cabbage from California," he said.