The Legend of Georgia McBride takes the stage at Redwood Curtain 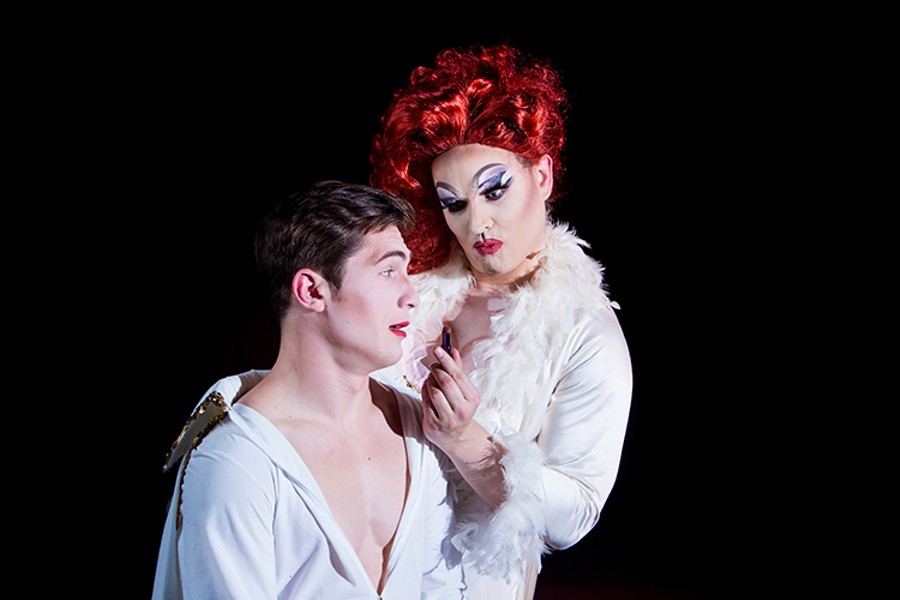 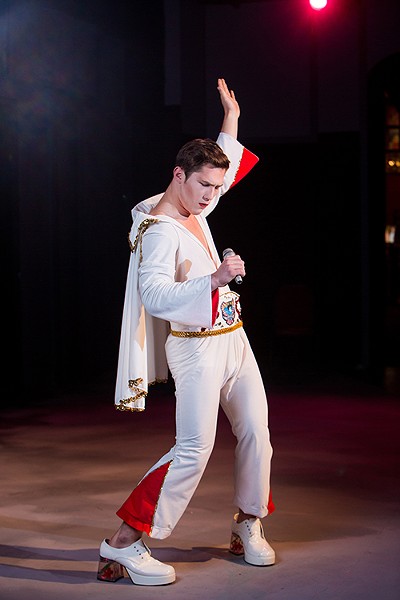 Drag shows, and even drag itself, are in a sense as old as theater itself, for varied reasons ranging back countless centuries. Be it a lack of female performers for female roles or plays with plot points involving men dressed as women, history has not suffered for a lack of men in dresses.

But the modern drag show stands alone as something unto itself, with roots in burlesque and modern pop music, and honed by the social changes of the past 100 years. And in Redwood Curtain's The Legend of Georgia McBride, there is proof that amazing drag numbers can, to a great degree, enliven somewhat otherwise ordinary material, although that material, between the numbers, is also at its best when addressing expectations and observations on identity.

In Panama City, Florida, located on the state's colorful panhandle (OK, I've never been to the Sunshine State; my image of it is mostly formed by the zippy mystery novels of Carl Hiassen) live young married couple Casey (William English III) and Jo (Michelle Purnell). Casey's the sort who will do something like use a debit card to buy a pizza and thus bounce the couple's rent check, which he has done just at the play's start. Jo has the full-time job, while Casey's focus is trying to break out big with his Elvis impersonator gig at Cleo's, a local nightclub.

Cleo's owner, Eddie (Jeremy Webb), has had it with the low-drawing Elvis act and axes it in favor of drag performers Miss Tracy Mills (an outstanding David Hamilton) and Miss Anorexia Nervosa (Christopher Kehoe), simply Rexy for short. This knocks Casey down to bartender but, one night, Rexy is simply too plastered to go out for one of her songs. While Tracy is at first unfazed ("This is nothing — she did once did Barbra Streisand's 'Jingle Bells' after a bottle of champagne and three Oxys"), matters are more dire than all that and Tracy realizes what necessity requires: Casey has onstage experience and must fill in for Rexy.

The roughly seven minutes of Miss Tracy getting Casey prepped for what shall become his drag persona, Georgia McBride, is a masterful bit all around, from Tracy's calmness to Casey's reluctance. "Why can't you just do a bunch of numbers all night?" he asks Tracy. "Because that's not a drag show," Tracy replies. "That's me in my bedroom as a teenager and nobody should have to pay to see that." And out a very hesitant Casey goes, hilariously stumbling through Edith Piaf's "Padam Padam."

As the play moves ahead, the two of them headlining at Cleo's gradually becomes a big hit, Casey/Georgia gets better with Tracy's coaching and he chooses not to tell a now-pregnant Jo about just how he's making so much money as the months go by. But he's getting the hang of things and even thinking on the right level, as when it dawns on him he can transform his Elvis into a persona encompassing the likes of Dolly Parton and Loretta Lynn, and Tracy all but jumps for joy at this breakthrough.

The Legend of Georgia McBride, written by Matthew Lopez in 2014 and having since been staged around the country, leads to a conclusion that at first seems easy to predict. Despite a sharp, level performance from Purnell as Jo, some of the domestic portions kind of lag behind the rest of the play. But the musical numbers are amazing and English and Hamilton make great use of the up-closeness of the venue to get the house rollicking. And the costumes by Rae Robinson are top-notch, befitting how central they are to the story.

Stories in stage or film of men in drag, such as Some Like it Hot or Tootsie, have historically been about men finding that the experience helps them learn more about what it's like for women in the world. With The Legend of Georgia McBride, that formula gets turned by about 90 degrees, as Casey's run as Georgia McBride includes revelations about what LGBTQ people experience and he comes to face his own beliefs and understanding. A point of breakthrough for Casey comes through a rather pointed and poignant story Rexy tells him toward the end of the play. English, Kehoe and Hamilton each bring various good elements to their roles, and director Shea King, most recently at the helm of Redwood Curtain's Five Lesbians Eating a Quiche, brings some real deft touches that elevate the play into good places both hilarious and poignant. Oh, I didn't even mention what any of the musical numbers are. The world of drag shows is all about dazzle, so when they're part of a play, far be it from me to ruin the surprise.

The Legend of Georgia McBride plays at Redwood Curtain Theatre at 220 First Street in Eureka on Thursdays, Fridays and Saturdays at 8 p.m. through July 29, with a Sunday matinee at 2 p.m. on July 23. For more information, call 443-7688 or visit www.redwoodcurtain.com.

The Liar, a witty farce about love and mistaken identity, opens July 20 at North Coast Repertory Theatre and runs through Aug. 10. Call 442-6278 or visit www.ncrt.net.

Main Stage returns to the Arkley Center for the Performing Arts for its third summer production, the musical Annie, which runs Friday, July 21 and Saturday, July 22 at 8 p.m. and Sunday, July 23 at 2 p.m. Visit www.mainstagehumboldt.com.