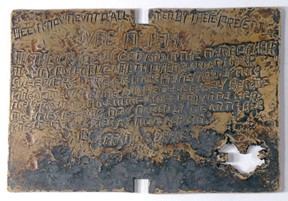 The story of the Drake Plate starts with a diary entry from 1579 written by one Francis Pretty, who accompanied Francis Drake on his 1577-1580 voyage around the world. Drake's ship The Golden Hinde had landed somewhere north of Golden Gate, although the exact location still isn't known. Pretty wrote: At our departure hence our General set up a monument of our being there, as also of her Majesty's right and title to the same; namely a plate, nailed upon a fair great post, whereupon was engraved her Majesty's name, the day and year of our arrival there ...

In 1933, a chauffeur found a brass plate, about 5 inches by 8 inches, near what is now known as Drake's Bay in Marin County. He later dumped it by the side of a road, not realizing what it might be. Three years later the plate was rediscovered by a shop assistant, Beryle Shinn, who discerned the date 1579. He took it to Dr. Herbert Bolton, professor of California history and director of the Bancroft Library at UC Berkeley.

Bolton had been encouraging his students to be on the lookout for Drake's brass plate, and when just such a plate was placed in front of him -- signed by G(eneral) Francis Drake and dated June 17, 1579 -- he promptly arranged for Shinn to be paid $3,500 for the relic. Shortly after Bolton proclaimed, "One of the world's long-lost historical treasures apparently has been found ... the authenticity of the tablet seems to me beyond all reasonable doubt." Soon after, the Electrochemistry Department of Columbia University certified the plate as the real McCoy.

In the mid-’70s, and with the 400th anniversary of Drake's landing pending, the new director of the Bancroft Library, James Hart, decided that the plate's authenticity should be proven beyond reasonable doubt. He arranged for it to be re-tested, with unambiguous results: the brass alloy was of recent manufacture, the finish was too good for the 16th century and the edges had been cut with modern guillotine shear.

It was all an elaborate hoax. The plate had been made by members and friends of a playful fraternity of California history enthusiasts, the Ancient and Honorable Order of E Clampus Vitus ("... dedicated to the erection of historical plaques, the protection of widows and orphans, especially the widows..."). The fraud was only intended to spoof a fellow member, but once the University of California put its imprimatur on the find, the hoaxers worried that openly revealing the joke would embarrass too many people. Instead they dropped hints -- and even published a booklet! -- about the plate's true origin, all of which were missed or ignored by those with reputations at stake.

And that's the rest of the story. Happy April 1!

CAPTION: Not 431 years old, despite the date (IVNE.17.1579) on the second line. The plate is currently in the Bancroft Library, UC Berkeley.