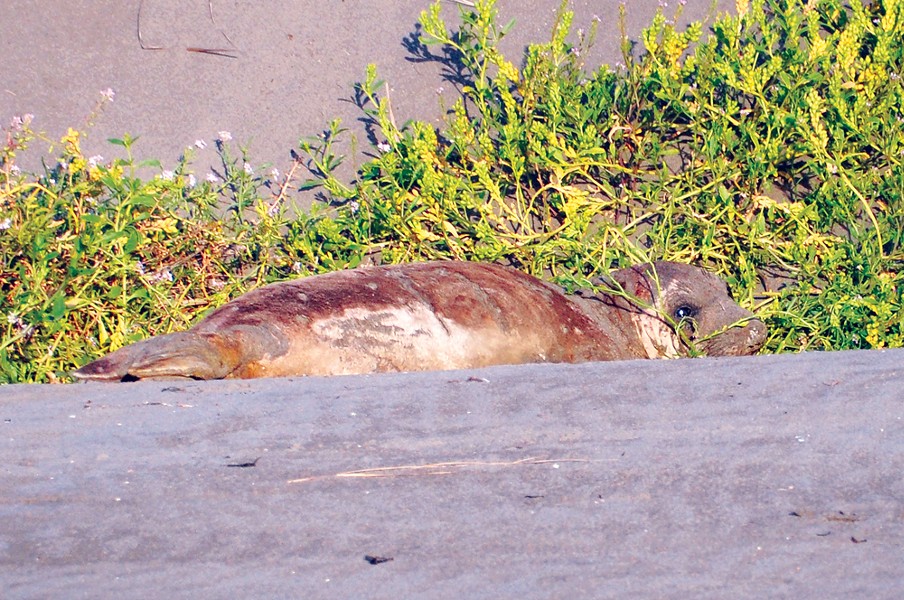 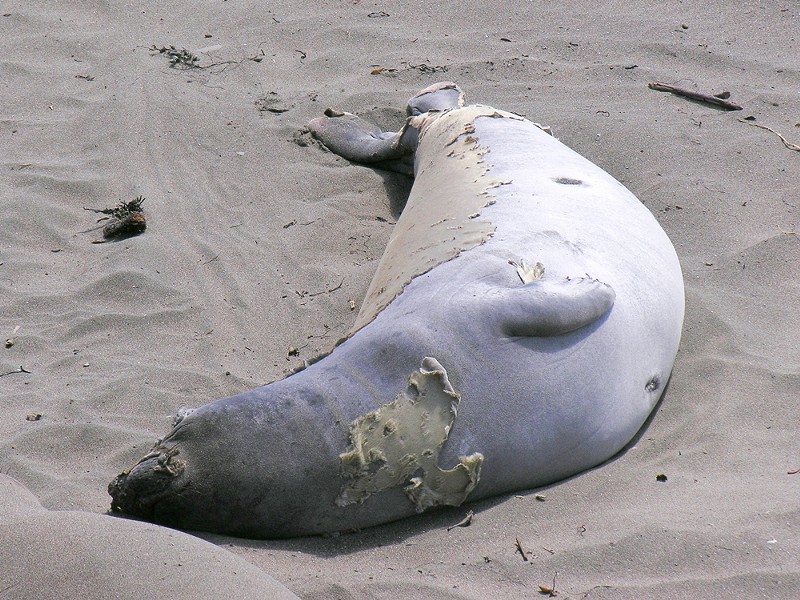 "Men, are you tired of not being noticed? Do women look right through you? Well, bull elephant seals don't have these problems. Stay tuned to learn about the benefits of being a dominant bull!"

This infomercial had my interest. But northern elephant seals (Mirounga angustirostris) are uncommon in Humboldt. I've only seen two small ones at Cape Mendocino and on Mad River Beach. I hear there is a growing colony on the Lost Coast but so far, bulls haven't been hanging out there.

The only bull I've seen here was a carcass washed up on Mad River Beach just a few weeks ago. This poor adolescent was very decayed and appeared to be covered in post-mortem shark bites.

So, I worried. Would I look like a weirdo living as a bull elephant seal around here?

I did it anyway. The first step was having four robust canine teeth installed and a huge inflatable nose grafted onto my face. The nose looks and functions like a real bull elephant seal's nose. It hangs about 8 inches past my lower lip, amplifies my voice and makes loud and threatening popping sounds.

I'm pretty intimidating now, though I'm not 15 feet long or 5,000 pounds like an actual mature bull may be. In fact, of the world's so-called pinnipeds, which include seals, sea lions and the walrus, the northern elephant seal is the second largest. Only the southern elephant seal around Antarctica is larger.

When real bull elephant seals fight for access to a harem of females, they rear up and slam their large canines into their opponent. It's violent and bloody. And an experienced bull develops an armor-like spread of scars and callouses on his chest and neck.

I tried my luck at a nightclub flopping around on the dancefloor until another elephant seal guy approached. We snapped our noses and shouted, but rather than back down, he challenged me. I was about to lunge and bite his chest, as one does, but he removed his shirt to reveal his bloody calloused body armor upgrade. As it often is with real bulls, his effective display of dominance averted the fight. But I was forced to concede all the ladies in the club into his harem.

I obviously needed the full bull package. And now with my new internal organs, blubber implant and powerful rear flippers, I can swim thousands of miles, dive 2,500 feet deep and hold my breath for half an hour while catching fish and squid with my mouth — just like an average elephant seal!

We elephant seals spend about nine months of the year feeding offshore in a broad area from California through the Aleutian Islands. And 90 percent of that time, we are deep below the surface foraging. So, we are difficult to observe while at sea.

But northern elephant seals come ashore in winter for breeding on beaches from Central California to Baja. A female gives birth to a single calf weighing about 70 pounds. And after a month of nursing, the calf may weigh 300 pounds. Later, when females are in estrus, the bulls compete for the privilege of doing that thing worth fighting for. Later in the year, the seals come ashore again to molt skin and grow new fur.

Northern elephant seals were hunted almost to extinction in the 1800s and I wanted to help with their rebound. So I competed and won me a gal. She's whiskerier than I normally like, but she's a lovely 10 feet long and 1,200 pounds. Our first calf is due next winter after an 11-month gestation period.