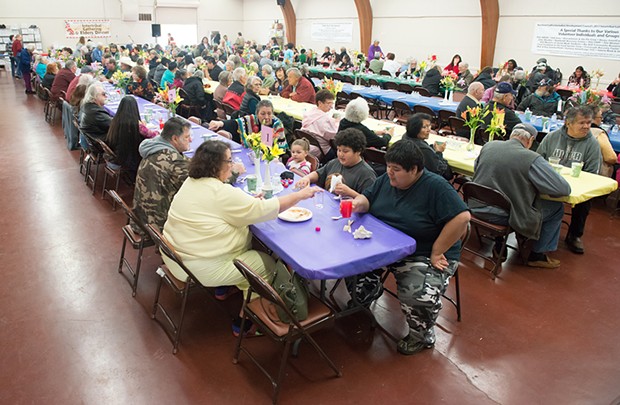 Many people were recently left without what has become their fall tradition. For 38 years the Northern California Indian Development Council (NCIDC) has put on the Intertribal Gathering and Elders Dinner around Veterans Day. This year there was no reveling in the reunion of friends and family, no basking in the glow of honor placed upon the elders and veterans in our community.

The Northern California Indian Development Council is an intertribal nonprofit organization whose members include Blue Lake Rancheria, Elk Valley Rancheria, the Indian Action Council, the Karuk Tribe, the Nor-El-Muk Tribe/Band of Wintu Indians/Wintu Nation, Quartz Valley Indian Reservation, the Tolowa Dee-ni' Nation, Trinidad Rancheria, the Tsnungwe Tribe of California, United Indian Health Services, the Wintu Educational and Cultural Council, the Wiyot Tribe and the Yurok Tribe. As NCIDC's Executive Director Greg Gehr put it, "It was a perfect storm of declining contributions and rising costs," that killed the event. Like dammed up rivers that kept fish off the menu at previous years' gatherings, major contributors and donations that once covered the $50,000 cost of the event dried up.

It takes donations from a variety of local tribes, nonprofits, foundations and businesses to pay for the ITG/Elders Dinner. That funding declined over the past decade. While working at NCIDC, I pleaded the case for the ITG to many a tribal council and other funding entities. In the past, many partners ponied up but in recent years bestowments became more and more scarce.

It also takes more hours than most realize to pull off the event, with its countless administrative details. Planning started in earnest in the early summer and continued up through the week prior spent at the Redwood Acres Fairgrounds preparing for, hosting and cleaning up after the daylong celebration. It was a herculean effort made by the small staff of NCIDC and the army of those who stepped up to the call for assistance every year to ensure that the eagerly anticipated get-together was held. More than 300 volunteers per year were needed to pull off a successful gathering and local drug and alcohol rehab facilities, Humboldt State University organizations and Greek houses, community clubs and individuals have always been there to provide succor and lend a hand.

Having worked at NCIDC for over 20 years and being in the local Native community all of my adult life, I have worked at more ITG/Elders Dinners than I can recall. I have a myriad of fond memories from cooking and serving tons of food to providing a memento to an elder full of gratitude. Gifts of blankets and other items were always given to all attending elders over 55, regardless of race. The gifts were typically handed out by local youth, reinforcing the special role elders play in Native culture, and it always amazed me how the smallest present was cherished by recipients. 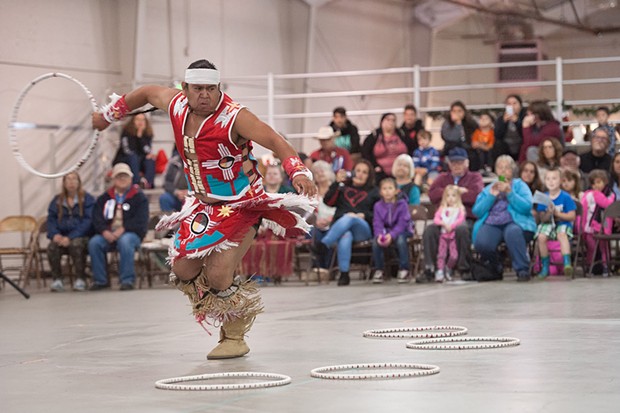 The schedule of events usually included dancers from California Tribes, as well as the Intertribal Pow Wow Dance demonstration and the always popular Aztec dancers. A special recognition of all veterans was on the agenda and a variety of Native American craft vendors helped kick off the holiday shopping season.

A traditional salmon dinner, cooked over alder wood, in addition to a holiday meal of turkey and all the trimmings, was served free of charge to all elders in attendance and to others in the community for a nominal donation. Local politicians and those well known in the community served the dinner to the hungry participants, who would often show up hours early to get a seat. Annually, more than 1,500 meals were served.

The ITG/Elders Dinner evolved over the years. At one point, it was a three-day event starting on a Friday and concluding that Sunday with another pow wow and a community breakfast. At another point, it was moved from November to September in hopes of better weather and was held in the center of the Redwood Acres Fairgrounds racetrack. But the elders clamored for their usual one-day November event, so it was restored to its original time and place.

In a recent press release, NCIDC Chair Ruby Rollings commented that the ITG/Elders Dinner "is not ending, it is evolving." Due to the cancelation of its flagship event, NCIDC has opened up a grant offering for tribes and Native organizations to request funds. This funding is intended to support sovereignty, as funds will be allocated in accordance with the needs of each agency. The release went on to say, "It is anticipated that eligible applicants will be a Tribe, or Native American nonprofit organization hosting an appropriate Native American community event with cultural and informational outreach components, located in Del Norte, Humboldt, Trinity or Siskiyou counties." The funding is limited and competitive, but that, alas, is the state of the nation.

It is sad when such a treasured event such as the ITG/Elders Dinner goes by the wayside. It was a wonderful time for the entire local community to come together to share in Native culture and share in the American Indian tradition of celebrating our elders.

Just my two dentalia's worth.

André Cramblit is an enrolled member of the Karuk Tribe who remembers fondly being raised during the summers on the slamming salmon river by his Great Aunt and Uncle who liked to go visiting and helping their Elders.