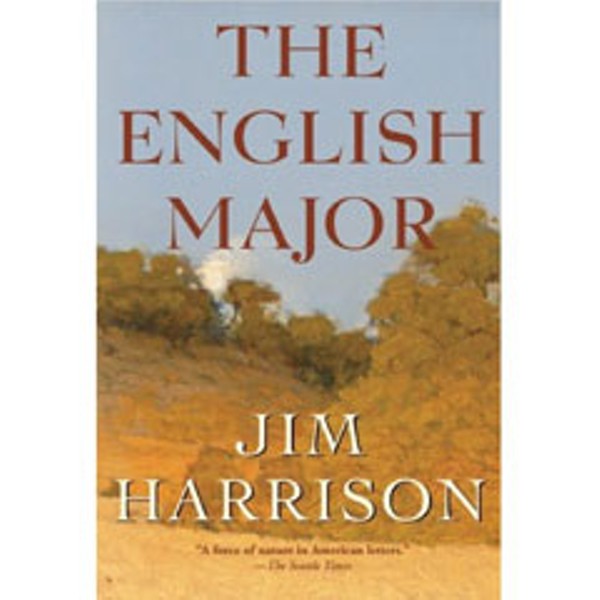 Jim Harrison is known as a master of the novella -- his most famous work is probably Legends of the Fall -- but he's also written what I regard as an American epic with the 800-plus pages of the interlaced novels, Dalva and The Road Home. This new one is an ordinary-sized novel, a first-person narration on the comic side. It's got the eccentric sentences and preoccupations that Harrison fans will recognize: sex, food, memory, siblings, dogs, landscape and the road, but with one more added: age.

At the age of 60, Cliff is hanging on the edge of his old life, his last day on his farm in Michigan that his wife has sold for redevelopment, after divorcing him. Cliff hits the road, immediately hooking up with a hot ex-student from his early teaching days, the 40-something Maybelle. Good luck, he observes, is a mixed blessing. "Forty-five years of sex fantasies come true and I'm thinking I wish I could go fishing." While Cliff takes in landscapes he's never seen, Maybelle stares at her cell phone searching for a signal.

After Maybelle disembarks in Minnesota, Cliff makes his way to the North Coast from Oregon, on his way to visit his gay, show-business son in San Francisco. It's in Eureka that at age 60 he sees the Pacific Ocean for the first time. "The Pacific Ocean was more than I bargained for. At first I thought I might have a heart attack ... I spent the next day and a half between Eureka and San Francisco hugging the coast as closely as I could and stopping a couple of dozen times for yet another look. The ocean became the best smell of my life."

As he approached Eureka, Cliff came up with the eccentric project that would eventually center him again: He would rename the 50 states and the birds of America. On the road he struggles to find the self that he'd left behind to become a serious farmer -- the nimble-minded English major whose thoughts and feelings weren't restricted to his fruit trees and birthing cows. Yet it's clear from his alienation from the cell phone world, as well as his deep ties to the land and farm animals (the only photos he takes on the trip seem to be of cattle) that he's also being pulled back.

So will he change his life completely, perhaps devote himself to literary pursuits? Or will he reject change and revert? Well, there's no either/or for Cliff, or in this gentle, funny novel that should entertain all readers, but inevitably will have particular meaning for those of Cliff's age -- and Jim Harrison's.