The Expanding World of Geoglyphs 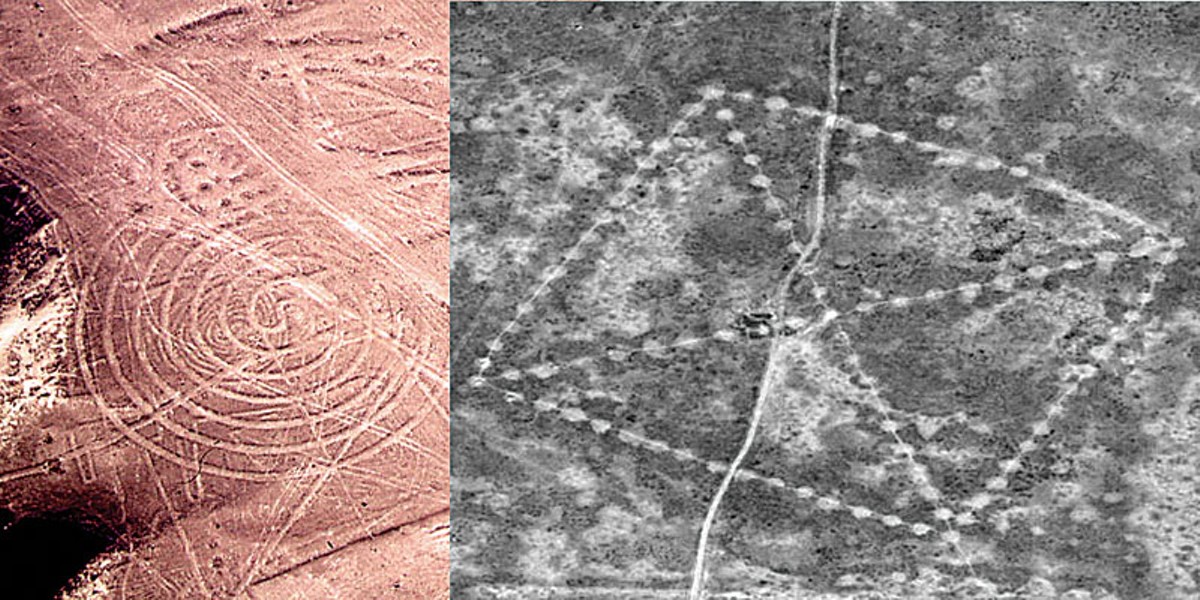 Left: Nazca spiral (Barry Evans). Right: The Ushotgay Square was the first of over 200 geoglyphs recently discovered in Kazakhstan (NASA)

A loose definition of geoglyph might be: "a large artificial figure on the earth's surface which is much easier to appreciate from above than from the ground." To which one might add: "made by mostly unknown people for totally unknown purposes." The most famous set of geoglyphs, the Nazca Lines in southern Peru, has been attracting an odd mix of archeologists and alien-hunters for 80 years, but a newly discovered gaggle of ancient patterns on the steppes of Kazakhstan in Central Asia is generating the same sort of interest. Taking them in turn:

Nazca: When my wife and I flew over some of the Nazca lines and figures 30 years ago, we were struck by their sheer size and number. The largest are 700 feet across, while hundreds of lines, animal outlines and geometric figures extend over a 200 square-mile area. We don't know a lot about the Nazca people who built them between about 400 BC and 500 AD, but we can infer that they were in the area for centuries — think settlers rather than nomads.

Why did they build them? My wife and I routinely get a kick out of the phrase "built for cultural and religious purposes." We've seen this on dozens of explanatory signs in archeological sites ranging from Mexico to Turkey to Cambodia. I assume it's universal archeological code for "We don't have a clue!" So it is with the Nazca Lines — sure, their builders might have been appeasing the gods or begging for rain. Or, in the other stock phrase, they might have constructed them "for astronomical reasons." Maybe. But in Nazca, whatever your favorite alignment — sunrise on the winter solstice, perhaps — you'll find it somewhere, so prolific are the lines.

Meanwhile, the looney fringe has invoked balloons, airplanes and spaceships in explaining them. How could these primitive people, they wonder (while ignoring contemporaneous Mayan pyramids), possibly have built such huge and elaborate figures? Easily. University of Kentucky researcher Joe Nickell was able to reconstruct a typical pattern with tools used by the Nazca people and a team of students in a few hours.

Kazakhstan: Fast forward to 2007, when a Discovery Channel "ancient pyramid" program prompted economist and amateur Kazakh archeologist Dmitriy Dey to examine Google Earth images of his country. No pyramids, but he quickly found the 900-foot-wide square seen in the accompanying satellite image in the middle of nowhere about 200 miles south of his home town of Kostanay. Since then, Dey and other enthusiasts have found over 200 figures in the same area.

Unlike the "negative" lines in Peru (where the ancients removed a few inches of reddish surface rocks to expose underlying white clay), most of the Kazakhstan geoglyphs are "positive" — they're built to be higher than the surrounding ground. In the case of the Ushotgay Square (named after a nearby village), each of its 101 mounds is about 40 feet across. They're now about 4 feet high, but were probably twice as high when they were built.

We know virtually nothing about their builders. As in Nazca, we can be sure they were settlers — before these geoglyphs were dated to around 800 BC, archeologists thought a previous people, the Mahandzhar, might have been responsible. But the dates are wrong, and the Mahandzhar were nomads; the scale and scope of these constructions tell of settled agriculturalists who were there for the long haul.

I love it that we're still finding such impressive artifacts from our long-ago past. Just when we think we know our planet, something else crops up. Such is the never-ending delight of discovery.

Barry Evans (barryevans9@yahoo.com) is jealous of his wife who landed a volunteer assignment in Kazakhstan a few years ago.