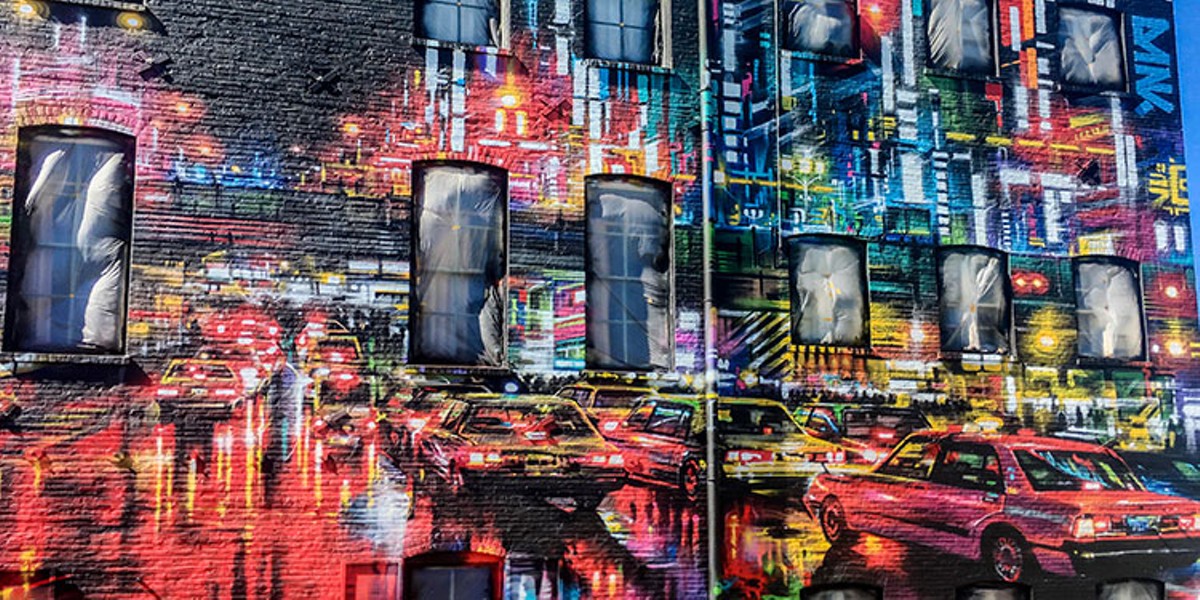 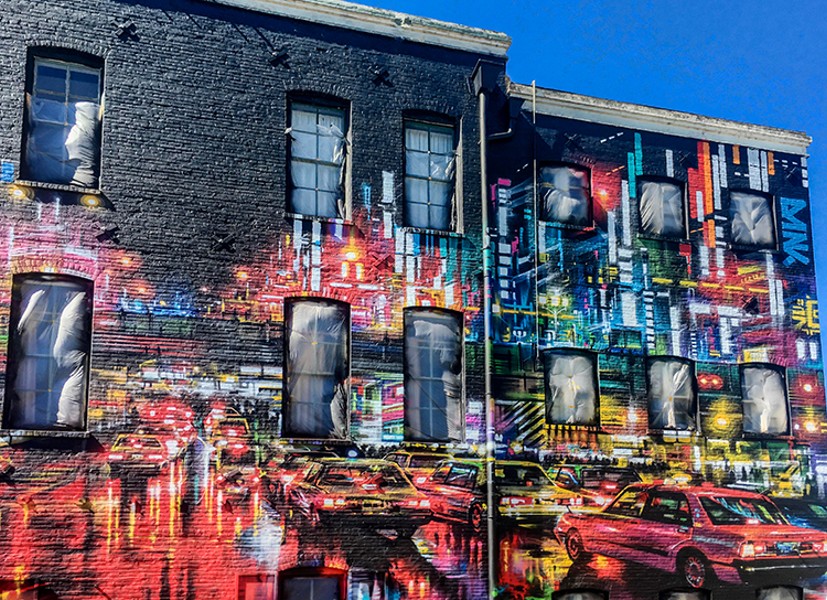 Old Town Eureka twanged with the shock of the new last week when street artist Dan Kitchener unveiled an enormous new mural in its midst, the first to grace the city in several years. "Electric-City" is executed entirely in freehand spray paint on the east side of the Buhne Building at the corner of G and Second streets. It breaks with the pale masonry of the buildings around it, conjuring an illusion of deep perspective from a flat brick facade.

Kitchener's latest noir cityscape is a flickering neon matrix, all reflection and glare. We're staring into the dark heart of the metropolis. Neon signs tower above the street. Streaks and smears of color bleed from ads and traffic lights, reflecting in the city's rain-slicked surfaces. The mural makes no effort to perpetuate the line of the buildings around it. In fact, it negates the architecture, opening up an illusionistic boulevard that transects the Buhne building at right angles. It's almost as if the wireless links that connect devices and minds around the globe are more important than bricks and mortar.

The street scene is inspired by Kitchener's experience of the Shinjuku district of Tokyo, Japan. Kitchener completed the mural, his largest to date, in eight days. At a massive 50 feet high and 70 feet wide, it ranks among the city's biggest works of public art — a major statement, and not only in terms of square footage. Kevin Bourque of the Eureka-based Black Faun Art Project Group, who curated and sponsored the work's creation, said in a statement that he wants the piece "to represent the onset of a new phase in the development of Eureka as an arts community."

Kitchener, who lives in London and also goes professionally by the street art handle DANK, started working as a freelance mural artist after a decade-long career in animation and design, benefiting from the surge of interest in all forms of "street art" that the U.K.'s anonymous graffiti artist Banksy generated in the early aughts. Unlike Banksy, whose guerrilla approach to placing art in public space has typically required speedy execution, Kitchener works with building owners' permission and paints his murals on-site, rejecting stencils, grids, projections and other labor-saving tools that allow an artist to execute some of the work in advance.

He has secured numerous commissions for his signature cityscapes, completing works in England, Sweden, Italy, Cambodia, Vietnam, the United States and Canada — mostly on a similarly enormous scale. Last summer he completed his first project in the United States, a multi-story mural on the side of a Pittsburgh restaurant. Two days after completing "Electric-City," the globetrotting artist had already moved on to his next commission: a nightclub in the English city of Canterbury.

Bourque said that his decision to sponsor the mural was inspired by a recent trip to Art Basel in Miami, where he was impressed by the wealth of graffiti and street art in the Wynwood Walls district. He has said that he hopes this project will kickstart a new era of public art in Eureka, eventually resulting in "something like an annual summer mural festival that is inclusive of different styles of mural art around the world, while embracing the tone of this community."

Timeliness puts the "street" in street art. Rap music was created to be "the CNN of the streets," as Chuck D. of the groundbreaking group Public Enemy is credited with saying. Street art, which grew out of the grassroots complex of hip-hop-related art forms developed in and around New York City in the 1970s, has similarly been defined by its response to the moment.

While Eureka has a rich tradition of mural painting, the pace of new work has slowed in recent years. Duane Flatmo and the associates who worked under the aegis of the whimsically named Rural Burl Mural Bureau created dozens of murals in and around Eureka during the early 2000s, many of which are now beloved institutions. Bourque wants to see that period's dynamic spirit return.

"We have a lot of murals here; we're an artistically conscious community," he noted. "At the same time, it feels like we need new blood."

"Electric-City" stirred up modest controversy in the comments section of the Lost Coast Outpost, where evolving views on public art were on display. The unfamiliar urban imagery, so obviously not from here, displeased some viewers on principle. In addition, Kitchener's London roots generated a certain amount of discomfort. "Hire a local artist!" some said. Some commenters accused the work of "clashing with the architecture" or simply felt that it was "out of place." "Redwoods being parted by a river would've better suited this area," one commented.

Much critique was motivated by the shared assumption that murals should represent the place where they are located. But the commentariat could not agree on basics of the work's appearance. Did the nocturne vision look like Eureka, or did it not? Some residents said it did ("Have you ever gone Christmas shopping in Old Town Eureka, in the rain?"), while others angrily demurred. The unspoken assumption underpinning much of the criticism was actually the idea that murals should represent not just the place where they were made, but a particular vision of that place — in this case, one that would mesh easily with "Victorian seaport" branding.

Anonymous natterings about the ominous presence of "Asian writing" in Kitchener's mural, along with comments along the lines of like "looks like a South Korean puked on the wall. Demand a refund," made it clear that the knee-jerk hostility the mural elicited among a minority of respondents had a lot to do with the fact that it depicts a faraway Asian city populated by nonwhite people, whose cultural difference is perceived by some locals as a threat.

But the work inspired an equally passionate defense from locals, as well as satire in the Outpost by author and Eureka resident Amy Stewart. In a video interview, Kitchener said he enjoyed the fact that while he was painting, "around 50" local workers and residents came by to chat or just to rubberneck each day. Real-world response, he said, had been overwhelmingly positive.

Twenty-first century geography is connected in many ways. Existing socially, culturally and professionally in two or more places at once is the new norm in the "gig economy." The fantasy metropolis depicted in Kitchener's mural might look exotic but such cities are scarcely remote from area residents' concerns. Many people who choose to live here do so because digital technology gives them the option to live remotely while maintaining professional links to major urban centers that might be thousands of miles away, as the crow flies.

Quite a few of the murals around this city celebrate a sanitized version of the past and/or nostalgia for industries that provided the mainstay of the local economy 100 years ago. Love it or hate it, "Electric-City" serves as a timely corrective to these backward glances — a reminder that a world exists beyond the Redwood Curtain. In fact, it suggests that the well-worn curtain metaphor may no longer be that applicable.

Words, pictures, data, dollars and cents move instantaneously and unceasingly from one side of the world to another, making a border curtain about as relevant today as a border wall. Successfully defining regional identity will likely be more important than ever in a globalized, decentralized environment. But artists now misrepresent what regional identity means if they do not make the effort to show how regional and local issues are entwined with global dynamics.

Muralists of the future: Tell us something we don't already know! A city the size of Eureka has room for multitudes and there are still a lot of blank walls out there.

Dan Kitchener's mural can be seen on the Opera Alley side of the Buhne Building on the corner of Second and G streets in Old Town Eureka. Visit https://vimeo.com/227302522 to see a short documentary video about the mural's creation made by Black Faun Art Projects.