The Fastest of the Fast

Sprinters from throughout HDNL history 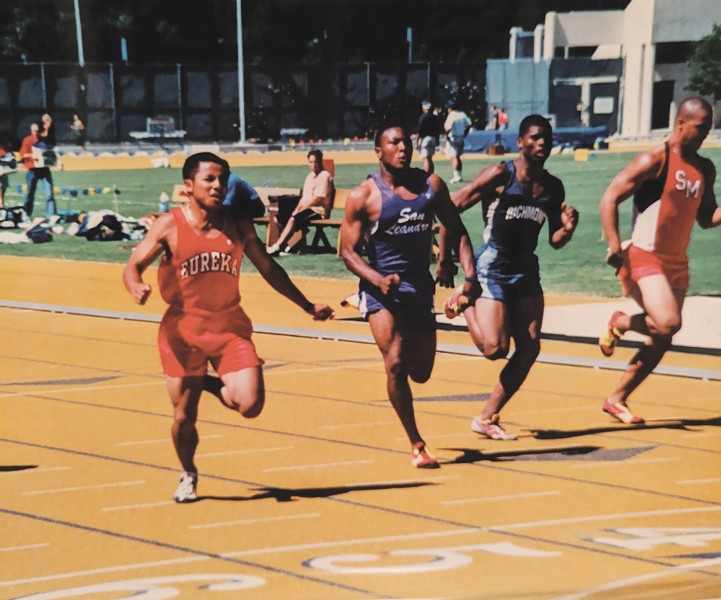 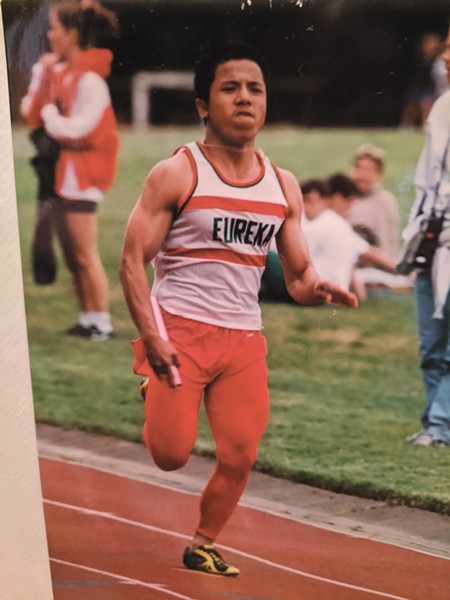 My virtual 100-meter dash is composed of two heats of eight sprinters from the Humboldt-Del Norte League record books (16 fast boys) and then the finals, made of the eight fastest qualifiers from the two heats. I rely on stories, times, records, conditions and personal visuals. These 16 might not include the fastest person ever from the league — there is no way to know — just my imagination for a 100-meter race. I am only talking about top speed, not the best track stars of all time.

There were lots of fast people from local high schools who were baseball players but I do not have times for non-track and field athletes. Don Schoenhofer and Paul Ziegler from Fortuna High come to mind. In fact, many athletes from many schools who did not run track could really scoot. I would love to get some feedback. Chuck Ehlers was a great coach at Arcata and McKinleyville and did it without always having the best sprinters. Most of these star contenders were from Ferndale, Eureka and Fortuna. This time, it is the boys race.

Funny thing that I coached the fastest short relay team in league history but none are on this list. A kid named Chris Holman could be and I have a whole story about him, but not this time.

Lane 1: Carl Peterson, Ferndale, 1936. He was the fastest sprinter of the time whose marks held for decades. He is still in the local record books in the long jump and set the 100-yard dash standard of 10.0 that was not broken until 1964. He ran on dirt, of course, with long spikes.

Lane 2: Cecil Stephens, Fortuna, late 1950s. A football and track star at Fortuna, Shasta and Humboldt State University, he almost broke the league 220-yard record in his sophomore year. He did not run track his senior year, as he moved to Shasta to start junior college. He is still on the record board.

Lane 3: Keith Weidcamp, Eureka, 1958. Running on dirt tracks, he is still the No. 2 all-time HDNL athlete in the 200 meters. He is a legendary athlete and sprinter from that era at Eureka. Period.

Lane 4: Jim Goble, Fortuna, 1964. He was the one who finally broke Carl Peterson's 100-yard record in 1964. The story is he broke the 100-yard record with a time of 9.9 on dirt at Fortuna on a rare night when the wind was blowing the wrong way, which makes the record extraordinary.

Lane 6: John Burman, Eureka, 1965. Burman became a legendary football player at HSU, one of the best football players ever from Humboldt County. In track, his best events were probably the 200 and 400, and he made state finals his senior year.

Lane 7: Mike Bettiga, Fortuna, 1968. Bettiga qualified for the state meet in the 110 hurdles running 14.4 his senior year and later became the first HSU athlete to win a national title in a sprint event. He then went on to an NFL career as a wide receiver with the 49ers. Hard to compare. Bettiga's little brother Kyle and his teammates Bart Goodale and Kenny Parker are also deserving of this list.

Lane 8: John Yeider, Eureka, 1971. From the first of Howard Friel's Eureka teams in the late 1960s and early '70s. Was a standout anchor relay runner on some of the fastest relays ever. He had injuries at the wrong times and lost the league title in his senior year to Eric Hendricks from McKinleyville but came back with sectional marks that were as good as almost anyone historically.

Heat 2: The second heat begins in 1974 with two runners and a near miss that same year.

Lane 1: Lane Killingworth, Ferndale, 1974. Killingworth set a county record in 1974 of 9.8 in the 100-yard dash, and ran that fast twice. He led his Ferndale team to a state meet berth in the 4x100. He moved here as a 12th grader and took the HDNL by surprise during the football season. He was a bullet out of the blocks and ran with a muscleman style.

Lane 3: John Nunes, Ferndale, 1976. Nunes was a phenom to watch run down the sidelines or up the court. He was HDNL champion in a year with an incredible number of fast kids, such as Tim Grinsell and Tim Brownlow, his teammates. He was tall and chiseled and tied the league record of 9.8 in the 100 yards and, in my opinion, was the fastest ever from across the bridge.

Lane 4: Rob Harrison, Eureka, 1981. Harrison was the best all-around athlete in league history. He was a state medalist in the 110 hurdles, running 14.2 and still holds the league records in two events, and was a star football running back who made it to the pros. Also, he was a state medalist in wrestling. The 100 was not his event but it could have been if he were not such a good hurdler.

Lane 7: Khaek Khongsaengdoa, Eureka, 2001. He is the only HDNL athlete to qualify for the state meet in the 100 meters. His 200 meters was also remarkable. He has the fastest time in the history of the HDNL, with a fully automatic time he ran at Meet of Champions. He was lethal as an anchor runner of Eureka's 4x100 relay.

Lane 8: Alexis Robinson, Eureka, 2013. Robinson almost won the state 400 meters his junior year in what is one of top two performances in league history in any event. He was on the U.S. Junior National Team but dealt with injuries his senior year. As a quarterback, when he ran the ball and got through the line, he was gone. He holds the record in the HDNL in the 200 and 400.

There could be arguments made for many more who were not mentioned but these are my 16 standouts I would want to see run together in the typical two heats to qualify for the final, dominated by three schools. First three from each heat and the two other best times.

The fastest in HDNL history, but the fastest may be overlooked altogether. Blanket finishes for the heats and finals.

These athletes make the finals:

Since it is Kentucky Derby week, I am thinking in terms of odds. I will make Khongsaengdao the strong favorite and Nunes is my live longshot. What do you think?