The Filmore to Hunter's Point 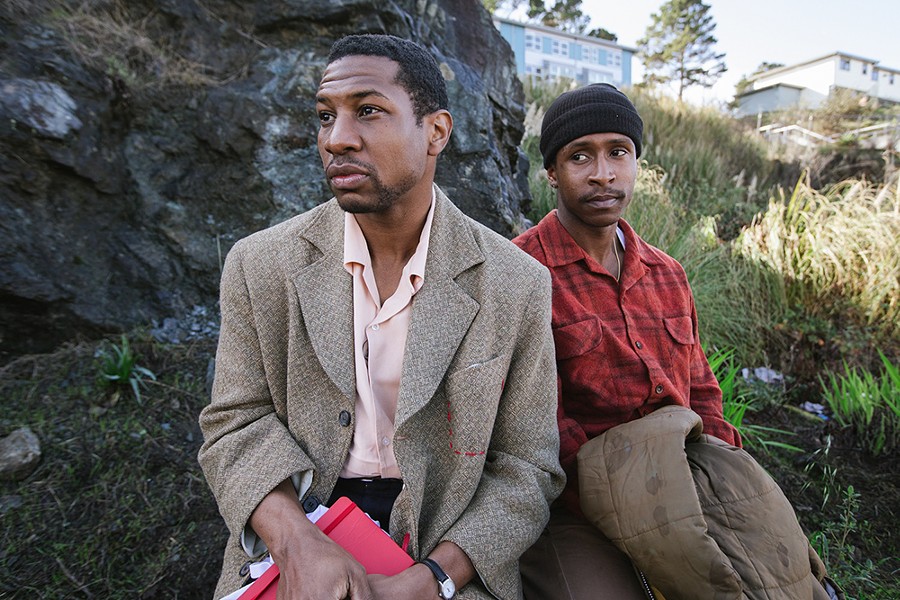 The Last Black Man in San Francisco When you find out they keep letting Quentin Tarantino make movies.

The Last Black Man in San Francisco. The movie opens on a school-aged African American girl skipping happily down a street next to the bay. Inches away, be-hazmatted workers gingerly remove debris from the area around her feet. The scene is Hunter's Point, a rarely talked about neighborhood of San Francisco where the U.S. Navy kept its fleets beginning in World War II. A street preacher, standing on a box, shouts to a nearly empty street about how the area has been polluted with radioactive waste for decades and the city's done nothing about it until now — when most of the black people are gone.

And so the film begins — a stark look at the reality of black people forced to be on the move. It's also a tribute to a lost era of a city with many lost eras, and whose identity keeps slipping through the hands of those who try to make a go of it. Slow-motion shots of people's faces as they move through town cement the idea that the city is its people.

Jimmie (Jimmie Fails), a young black man whose dream is to live in his childhood home, a Victorian house in the Fillmore district that his grandfather built, stays in a cramped apartment in Hunter's Point with his friend Montgomery (Jonathan Majors), an aspiring playwright, and Mont's grandfather (Danny Glover). They spend evenings in front of the TV as Mont explains the action to his grandfather, who is blind. Jimmy lives there because he's had a tumultuous upbringing; his father, with whom he has a strained relationship, lost the house and he spent part of his time growing up in a group home. He has nowhere else to go.

When Jimmie and Mont aren't riding their skateboards through the city, Mont can be found writing and reading his plays aloud on a little dock at the edge of the polluted bay. Jimmy recruits Mont to help him find ways into his old house. He is so obsessed with the house that he keeps an eye on it, removing trash and even touching up the paint, much to the current owner's chagrin.

In the Fillmore district, where a one-bedroom apartment can now be had for $3,600 a month and the median home value is $1.36 million, according to Zillow, it can be hard to fathom why someone wouldn't just give up — as many have. That's why Jimmy's grandiose dream is at the same time so admirable and tragic.

San Francisco's history is different than that of other larger American cities, especially those on the East Coast. Founded in 1776, its first real growth spurt wasn't until after gold was discovered in 1849. The city's demographics have continually shifted; in the 1800s, workers came from places as far away as China and Japan. African Americans have populated the city since the 1800s, but only sparsely until WWII, when people came from southern states like Arkansas, Louisiana and Texas to work in the shipyards. Conveniently, Japanese Americans were forced from their homes and into internment camps at that time. As San Francisco, like many other cities, had covenants that restricted people of color and various nationalities from living in most parts of the city, many of the available homes were in the Fillmore district, which became a thriving African-American neighborhood, even known as "The Harlem of the West."

But the Fillmore wouldn't last long. Starting in the late 1950s and lasting for the next 40 years, the city began demolishing houses in the area under the guise of combatting "urban blight." This amounted to the eviction of 4,729 households in a neighborhood that was 60 percent black, the shuttering of some 880 businesses and the razing of 2,500 Victorian homes, according to SF Gate. At this point, many people fled to Bayview and Hunters Point and farther out to Oakland in order to raise families. By 2016, black people made up just 6 percent of the city.

Black people losing their property is not an idea unique to San Francisco or to the late 20th century. It's something that continues to happen throughout the country. At one point, a friend who gives the men a lift points out an apartment building that he says was burned to the ground because it had rent-controlled tenants. Whether true or not, it's the same result as only the rich, and mostly white, can afford to live in the City by the Bay.

History aside, the film's focus on the relationship between the two men was the most compelling aspect for me. As Jimmy struggles to gain ownership of the house, Majors gives a heartrending performance as the ever faithful and optimistic best friend who tries to make Jimmy see he can look beyond "the stories we are born into." This first feature film from Joe Talbot won two awards at Sundance. Expect to see it get more. R. 120M. MINOR.

CRAWL. A woman (Kaya Scoldelario) attempting to rescue her dad in a hurricane/flood is beset by alligators which is only, like, the fifth worst thing that can happen to you in Florida. R. 87M. BROADWAY, FORTUNA, MILL CREEK.

SECRET LIFE OF PETS 2. This sequel lacks the charm, inventiveness and sweetness of the original, despite a strong cast that includes Patton Oswalt, Jenny Slate, Kevin Hart and Harrison Ford. PG. 86M. BROADWAY.

STUBER. An Uber driver (Kumail Nanjiani) is dragged into the pursuit of a killer by a cop (Dave Bautista) in case you needed more proof that the gig economy is the worst. R. 94M. BROADWAY, FORTUNA, MILL CREEK.