The Forest for the Happy Little Trees 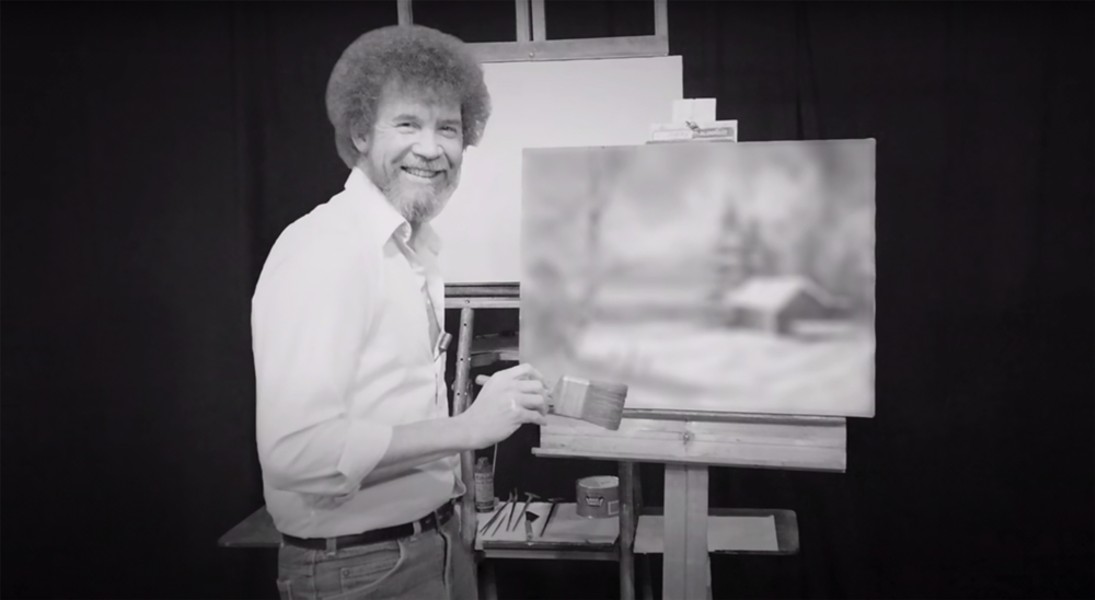 Bob Ross: Happy Accidents, Betrayal & Greed My trying to stay positive amid the collapse of society.

Yes, that Bob Ross. The white guy with the Afro and the soft voice who painted landscapes inconceivably quickly and beautifully for the PBS show The Joy of Painting, and who has since become a pop culture fascination. How did he do it? Who was he, exactly? And what happened to him?

Such questions are the subject of the documentary, Bob Ross: Happy Accidents, Betrayal & Greed, produced by Melissa McCarthy and Ben Falcone.

During the early pandemic days they were casting about for a project and thought of making a biopic about Ross, whom they greatly admire (they even have a toaster that burns Bob's likeness into a piece of bread). But when the pair began researching Ross, they were surprised to find intriguingly little information about him and shifted to a documentary, partnering with filmmakers Joshua Rofé and Steven Berger, who started investigating. That investigation led to a lot of closed doors: More than a dozen people who were close to Ross declined to talk to the filmmakers for fear of retaliation. Even the filmmakers themselves were warned not to go too far.

The story told in Bob Ross: Happy Accidents, Betrayal & Greed is a sad and confounding one, full of sympathetic characters, including Kathwren and Gary Jenkins, two of Ross' cohorts in the painting world who were affected by the same forces he was. It's also an incomplete picture of Ross himself, who, like all of us, contained contradictions in spades.

But it's possibly Bob's son Steve Ross who stands out the most. Awestruck by his father's paintings, Steve followed in his footsteps and has lived his life as an artist and teacher, even appearing on the show from time to time. This story is as much Steve's as it is Bob's, and he's had to live with some hard realities since the death of his father.

Ross had an unusual technique of painting landscapes from memory. Many of those scenes were of Alaska, where he was stationed during his military stint. His first paintings were on old metal gold miners' pans he'd paint with his wife, Vicky, sometimes staying up into the wee hours to complete projects before having to go to work the next day.

One day he saw a video by William Alexander, who had a show on TV where he painted landscapes quickly using a wet-on-wet technique. He couldn't believe anyone could paint so quickly but, after studying with Alexander for about a year, Ross developed his own technique, whittling his time per painting down to a mere 30 minutes. To contrast with Alexander's brash, high-pitched voice, he took on a calm and quiet persona. He began touring the country, teaching classes alongside Alexander and selling painting supplies on the side.

So how did Ross transform himself into the soothing icon who painted landscapes on public television? Annette Kowalski, already an accomplished painter, took a class from Ross and became enamored. She and husband Walter, a retired CIA operative, formed a partnership with Ross. He would be the talent and they would be the people who think up ways to collect money. But money wasn't the only driver that changed things; even the hobbyist art scene had its scandals. As Gary Jenkins noted about that time period, "Everybody was sleeping with everybody else."

According to Steve, the Bob you see on TV is a pretty accurate portrayal of the man himself: a kind soul who loved nature and animals. He was an artist but he was also a man with business savvy. The money he made from the venture enabled him to pursue other interests, like rehabilitating wild animals, starting a children's TV show, and riding around in his 1969 Corvette. But, as the documentary illuminates, things were beginning to fall apart around him.

The Joy of Painting aired on PBS for 31 seasons, spanning 11 years, from 1983-1994. Bob Ross: Happy Accidents paints an intriguing story of human failings as much as it shows the ways in which Ross' legacy still lives on. Ross is beloved; kitsch aside, he genuinely cared for people and helped thousands discover passions and abilities they didn't know they had within themselves. He believed talent was merely a pursued interest and that anybody could paint. This was a view he expressed consistently on television and in person. He often said, "We don't make mistakes. We have happy accidents." TV14. 92M. NETFLIX.

THE PROTÉGÉ. A highly trained assassin is out for revenge after her mentor is murdered. Starring Maggie Q, Samuel L. Jackson and Michael Keaton. R. 109M. MINOR.

THE SUICIDE SQUAD. The bad guys gear up for some anti-hero action, only this time with a lot more color. Starring Margot Robbie, Viola Davis and Idris Elba. R. 132M. HBOMAX. BROADWAY.