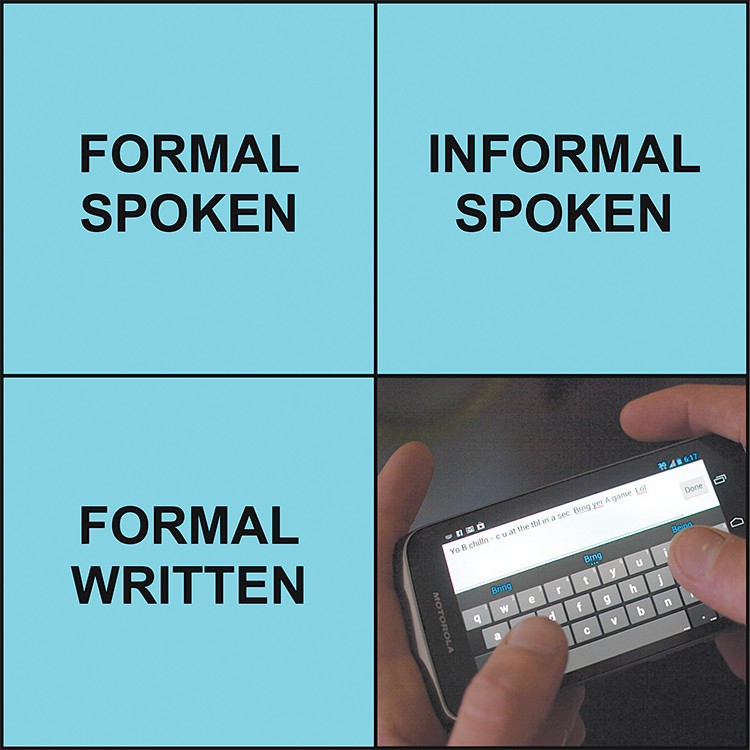 Texting as a form of communication is barely 20 years old, although at least one texting term goes back nearly a century, to 1917, when Admiral John Fisher wrote Winston Churchill (then minister of munitions), "I hear that a new order of Knighthood is on the tapis. OMG! (Oh My God!) Shower it on the Admiralty.  ("On the tapis" was once newspeak for "On the table.")

We've come a long way since then. No one actually spells out OMG anymore, or, for that matter, LOL, IMHO, FYI or BFF, all of which were legitimized by inclusion into the venerable OED (sorry, that's Oxford English Dictionary) a couple of years ago. Consider that every year, some 10 trillion text messages are sent -- that's 300,000 every second! Or that 95 percent of young adults (18-24) in the United States send more than 100 text messages daily. Does this represent the instant birth of a new language? Or are we simply filling the missing "fourth quadrant" of our linguistic abilities? In a recent TEDx talk, linguist John McWhorter invites us to consider a simple two-by-two language matrix:

• Formal spoken is oratory, in the "ask not what your country can do for you" style, typically around 30 to 50 words per sentence.

• Infomal spoken is what we do every day, complete with our ums and ahs, interruptions and half-finished phrases, at about eight words per sentence. "He was all like it's not my problem anyway." "Yeah, but did he end up paying the ..." "Um, well, not really."

• Formal written is what I strive for in this column. It's how letter writers (remember letters?) write. It's the stuff of school essays and book reports and, well, writing.

• Informal written, in McWhorter's view, was an empty box until the rise of texting as an abbreviated form of writing that mimics speech). That is, writing how we speak, with our thumbs doing the work our mouths used to. Not that all language, even formal, couldn't be shortened while still maintaining the full meaning: "4scr+7 yrs ago r fthrs brot 4th>ths contnt a nu n8n, cncvd n lbrty + dedc8d 2 th prpstn tht allmen r cre8d ="

Barry Evans (barryevans9@yahoo.com) sees parallels between texting and Gutenberg's democratization of writing with the invention of printing.