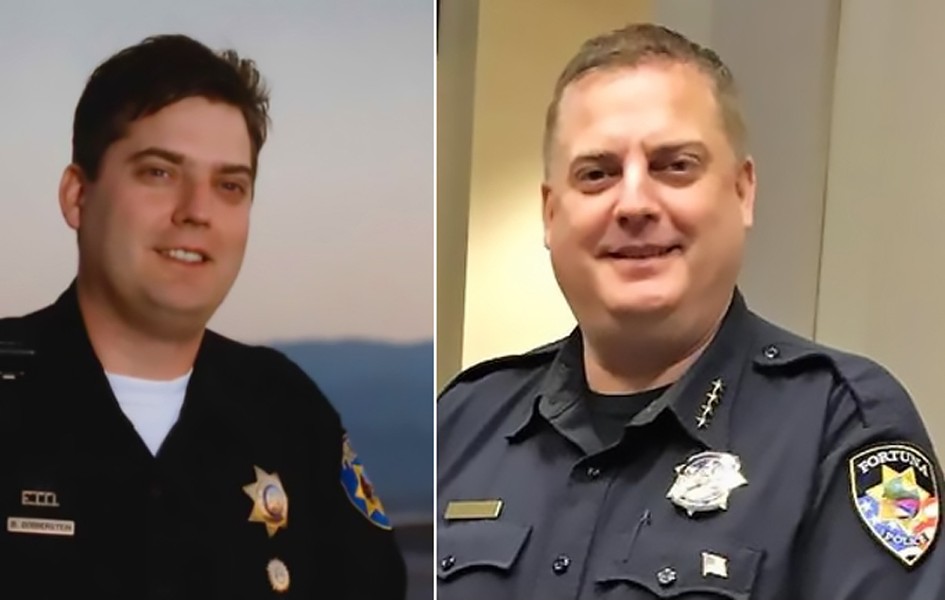 Submitted William Dobberstein served as a police officer in Fortuna for 25 years, including 11 as chief, before retiring in 2020.

William Dobberstein, Fortuna's recently retired police chief, who was widely liked and known as a "friendly officer," compassionate and willing to listen, through his 25-year career with the Fortuna Police Department, was found dead in his home Saturday. He was 53.

Humboldt County Sheriff William Honsal said his department is investigating Dobberstein's death in his Fortuna home with an autopsy scheduled this week, though he said the preliminary report is Dobberstein's death appears to have been a suicide. News of Dobberstein's death quickly reverberated through Fortuna and beyond, with many expressing a deep sadness at the sudden loss of a community fixture with a reputation for kindness and decency.

"There are no words to convey the feeling we're all experiencing," said Fortuna Councilmember Mike Losey. "It's a sad day."

Dobberstein retired in January of 2020 after 11 years as Fortuna's chief of police, having joined the department in 1994 and been promoted to sergeant in 2011. A graduate of Eureka High School and College of the Redwoods, he was considered "instrumental" in FPD's adding a drug task force agent, a school resource officer and two detectives, while increasing the department's community policing efforts. A U.S. Air Force veteran, Dobberstein was also the first chief to require military medical training for Fortuna officers, knowing they were the first to arrive at incidents with critical injuries. In addition to volunteering with the Fortuna Rotary and Veterans of Foreign Wars, Dobberstein represented FPD on the executive board of the California Police Chief's Association and was a long-time instructor at College of the Redwoods, teaching courses on criminal law and domestic violence.

He also served briefly as Fortuna's interim city manager in 2018.

But as news of Dobberstein's death spread through the community, many looked past his resume of accomplishments to speak of quiet, private moments, when Dobberstein's decency was on full display. One community member recalled, "He always treated me kind even when I didn't deserve it."

"He was great and supportive and he always had an open-door policy to talk to him about whatever you needed," Frank said, adding that extended beyond law enforcement work. "As a person or an officer, he would always hear you out. He did so much for our department and our community."

For Fortuna resident Natalie Belles, Dobberstein's death had a unique and heavy resonance. Belles said she first met Dobberstein when she was 13 and he was a new patrol officer on the force, at her parents' home while responding to a report that she was trying to commit suicide.

"I literally had a rope around my neck — but he was able to talk me out of it," Belles said, recalling how she was frantic, fearful she'd be removed from her parents' home, as Dobberstein calmly talked to her in the living room. "The way he was — it was caring. I can't explain it but he took the time as a person. ... He told me that I had a lot to live for and that I had people who cared about me and it would be something permanent. He just talked to me. You could feel the caring, the concern."

More than a decade later, after Belles was in a domestic violence situation that saw police repeatedly called to her home leading to what she described as a "false arrest," she said she and her mother went to talk to Dobberstein, who listened to their complaints and then apologized to them individually. He was just a "good guy," she said.

Reflecting on the impact Dobberstein had on her life and the way his life ended, Belles recalled her own struggles with undiagnosed mental illness and all-consuming feelings she couldn't explain or understand.

"I don't know what prompted him to do what he did," she said. "You never know. Someone can seem perfectly fine but be hurting so much and never say a word."

Across the nation, there has been a documented rise in deaths by suicide for current and former police officers dating back almost a decade. In fact, officer deaths by suicide have outpaced all other categories of line-of-duty deaths — including gunfire and car crashes — each year since 2016, with the exception of COVID-19, according to data from Blue H.E.L.P., a nonprofit dedicated to bringing mental health services to officers and their families. The data has prompted police agencies, including local ones, to put a focus on officer wellbeing, with many implementing wellness programs that include counseling services to help officers cope with the stress and trauma inherent in the profession.

As news of Dobberstein's death traveled through Fortuna, current or former officers took to social media to post suicide prevention hotline information or otherwise speak to the toll of the job.

"I retired from a career in 2020 that eats up your body, mind and soul," one former officer wrote. "It then spits you out into a thousand tiny little pieces with the expectation you'll figure out how to super glue yourself back together. ... Brothers and sisters who are still in it — I'm always here and with an open ear. I get it and I've been there. You are loved. You are appreciated. You are wanted. Please remember that. Check on your friends. Especially the strong ones."

The National Alliance on Mental Illness (NAMI) lists increases in alcohol and drug use, aggressive behavior, dramatic mood swings, impulsive or reckless behavior, and withdrawal from friends, family and social circles as warning signs that someone may be suicidal.

"Suicidal behaviors are a psychiatric emergency," NAMI warns, adding that if someone you know or love and worry about starts collecting or saving pills, or buys a weapon, begins giving away possessions or tying up loose ends (like organizing personal papers, paying off debts, or saying goodbye to friends and family), you should seek immediate help from a healthcare provider or call 911.

For the organization's full list of risk factors and tips for offering support to someone in crisis, visit www.nami.org/About-Mental-Illness/Common-with-Mental-Illness/Risk-of-Suicide.

The county of Humboldt maintains a 24-hour mental health crisis line at 445-7715. Additionally, a national suicide prevention lifeline can be reached at (800) 273-8255 and a crisis help text line can be reached by texting "HELP" to 741-741. Additional local, state and national resources for those in distress and their loved ones can be found at www.humboldtgov.org/2096/Suicide-Prevention-Resources.

"There is always someone to talk to, whether it's a suicide hotline or a friend or even a stranger — there's always going to be someone to help," she said, adding that mental health "services are absolutely necessary," for current and former officers alike.

In the days after Dobberstein's death, social media threads filled with community members' memories of the man, of the times he pulled them over but didn't give them a ticket, of kind words offered in stressful moments and of lives he'd touched in ways big and small. CindyLou Chapman-LeGrand took to Facebook to say she'd gotten to know Dobberstein while she worked as a dispatcher in Arcata years ago, recalling him as a "street cop" who was "committed to his community for his whole life."

"Godspeed, chief," she wrote. "May you now find your peace. We've got the Watch."