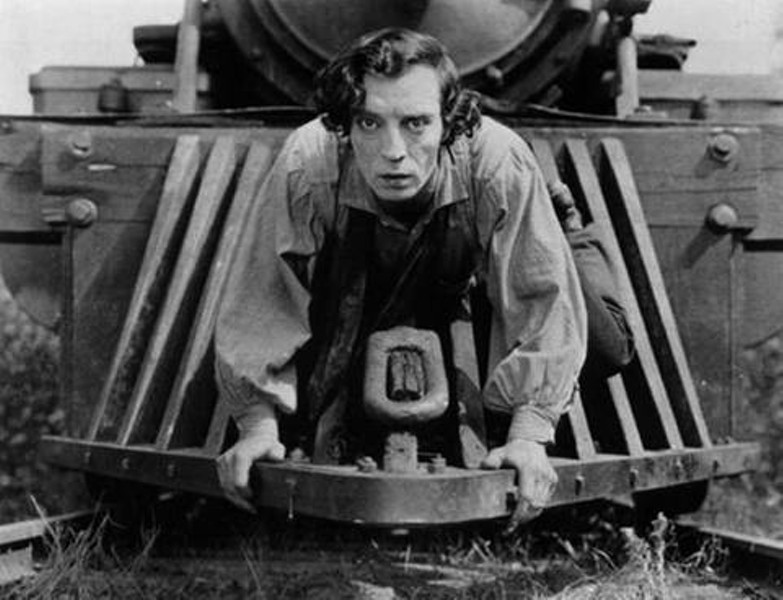 Seeing The General at Arcata High School last month totally changed how I view the Civil War. The silent film about a battle between the Confederate and Union armies premiered in 1926 and stars Buster Keaton. Last month, students from Arcata and McKinleyville high schools, in the ArMack Orchestra, performed a live score to the movie under the direction of music teacher Cassandra Moulton. Now, I didn't actually buy a Confederate flag afterward, but I did find myself cheering for the Confederate Army during the movie. And that was weird.

Ridiculous? Not as ridiculous as this: Moulton felt she needed to apologize to parents of students at the two schools for choosing the movie.

In the movie, Keaton plays a railroad conductor in the South who is in love with a girl whose father and brother enlist when the war breaks out. They expect him to as well, but the army needs him for the railroad and rejects him without telling him why. His sweetheart thinks he's just a coward. She gets kidnapped by Union spies and he goes off to rescue her. After an exciting railroad chase and lots of hysterical slapstick, he ends up saving her and the Confederate Army. The boys in gray demolish the Union army in battle. And we can't help but cheer.

I took my 12-year-old daughter to see it. She's at the age where she has to be dragged out of the house so you can imagine how thrilled she was at the prospect of seeing a black and white movie with no sound! But she loved it. The musicians were excellent.

It was weird to cheer for the Confederate Army at the end. But it was a movie. For 67 minutes the Union soldiers were bad. Then the movie was over and I remembered, oh yeah, this was a war fought over slavery and the Union Army was on the side of emancipation. The movie didn't brainwash me. It mostly went over my daughter's head because she knows zip about the Civil War. They don't teach it in California schools until eighth grade.

But enough parents complained — about the movie, not about the total lack of education about the Civil War in elementary school — that Moulton felt compelled to send out a letter of apology.

"It was not my intent in choosing the film to promote any celebration of the Confederate cause past, present or future," she wrote. "Furthermore, I take full responsibility for the selection of the film and for choosing to perform the rented score."

She admitted that she had not viewed the film before purchasing it and became concerned when she and her students viewed it for the first time. But by that time, it was too late to get another movie and score to master, and it also would have been financially difficult to do so, regardless. She made her choice based on a description of the film as a "beautiful, inventive, locomotive chase set in the Civil War." It had not occurred to her that in the movie, the South would win.

Should she have done more research prior to buying it? Maybe. But this is high school, not grade school. The American Film Institute, a national organization dedicated to preserving films and educating filmmakers, ranks The General No. 18 on the list of greatest American movies of all time and as second best silent movie. (Only Charlie Chaplin's City Lights ranks higher.)

In this paper in 2010, Bob Doran wrote: "Any student of silent movies knows The General. Buster Keaton's highly refined slapstick tale of a runaway Civil War train is a classic of early cinema." That was when local musician Greg Moore screened The General against his original score performed by a six-piece band at the Arcata Playhouse. The performances sold out.

I am so grateful to Moulton for screening The General. My daughter has an appreciation now for silent movies. As for the storyline, we had a discussion about it afterward but it went over her head. As far as she was concerned, the good guys were the good guys and the bad guys were the bad guys. It was just a funny movie about a guy trying to rescue his sweetheart.

I don't need my daughter's teachers to prescreen books or movies deemed classics. I fear that a small group of parents could keep thought-provoking material out of schools by giving teachers a hard time for the choices they make.

What was needed at the screening of The General was a discussion before or after the movie to put the storyline into context. Keaton based it on a true story — the Confederate Army did win that battle the movie portrays.

With so little funding and support of arts education around the country, particularly in rural areas, we should be grateful we have programs like the ArMack Orchestra and teachers like Moulton who believe in students enough to give them sophisticated projects. When Greg Moore screened The General in 2010, he performed the score with some of the most accomplished musicians in the county, telling Doran, "It's a complicated thing. There's a lot of music to learn and it all needs to line up with the action of the film."

Moulton wrote in her apology letter that once the academic year begins it is almost impossible to change the busy school calendar, which left her with the choice of sticking with the screening or canceling the event. "I decided to push ahead with the film," she wrote. "It was the wrong decision and I now realize that I should have consulted my administrative team for guidance in this decision, and will do so should I have any reservations in the future."

No. You made the right decision, Ms. Moulton. There was no sex or racial stereotypes in this movie. There was one troubling concept — that for the purpose of a movie plot, Confederate soldiers were the good guys. It was a simplistic movie representation of the most complicated part of our nation's history. Instead of nixing the screening, the school could have used it for all kinds of teaching opportunities in social studies classes.

This was the second time I've seen a silent movie accompanied by the ArMack Orchestra. I can't wait to see what they do next year.

Marcy Burstiner teaches journalism and mass communication at Humboldt State University. She's pretty sure that if she had Ms. Moulton as her clarinet teacher back at Walt Whitman Junior High in Yonkers she wouldn't have quit eighth grade band.