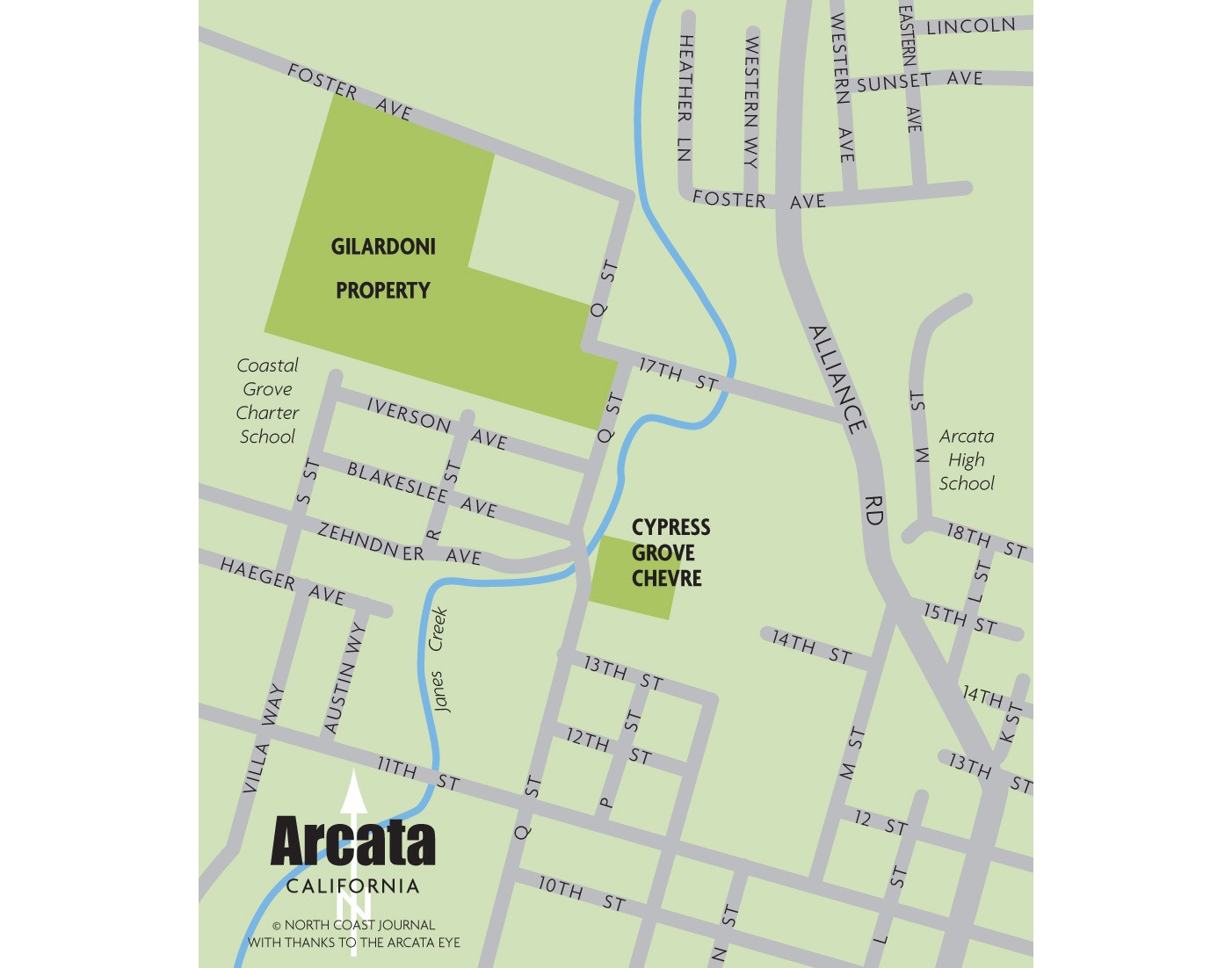 Last month the City of Arcata unexpectedly found itself faced with a test of its moral character, a test administered by a herd of hypothetical goats. Gourmet goat cheese producer Cypress Grove Chevre wanted to build a large goat dairy just outside city limits, on the border between a residential subdivision and the verdant pastureland of the Arcata Bottom. The test was given at a heated community meeting on June 13, when a group of protestors and angry neighbors claimed that the operation would likely cause pollution, toxic runoff, E. coli infections -- possibly even dead children. In a flash, Cypress Grove pulled out. With barely a moment to study, the test was over.

Did the city pass or fail? Residents were left to interpret that for themselves, and many have found the answers disturbing.

While the goat test involved many of Arcata's proudly held values, they didn't align neatly on either side. On the one hand, the dairy proposal -- which called for up to 1,400 goats on just under 23 acres -- came from one of the region's most beloved success stories, a locally grown company whose gourmet goat cheeses have received international acclaim. On the other hand, Cypress Grove was acquired last August by Switzerland-based dairy conglomerate Emmi. Was this a local company trying to decrease our dependence on foreign goat milk while improving the local economy? Or was it a greedy multinational corporation proposing a dangerous and inhumane factory farm?

To some extent these questions are now moot. The angry protesters scared Cypress Grove off of its favored dairy location -- a cow pasture called the Gilardoni property, located near the company's creamery. But Cypress Grove still hopes to build the dairy somewhere within a 15-mile radius. Plus, Arcata residents on both sides of the controversy are looking at this as a teachable moment, so it's worth examining what happened.

The Gilardoni property, which lies in county jurisdiction, is zoned "agriculture general." County regulations state that if the owner of property zoned ag general wants to set up, say, an animal feed lot or a hog or turkey farm, even a frog farm, then he or she must get a conditional use permit. However, county staff ruled that Cypress Grove's 1,400-goat dairy, which would include a one-acre building where the animals would be housed, fed and milked, was principally permitted on the Gilardoni property, meaning no permit was required. County staff based this determination on a 1995 Board of Supervisors ruling (a 3-1 vote, with one supervisor absent), which stated that a free-stall barn slated for a cow dairy near Ferndale was an "agricultural accessory building" and thus exempt from permitting requirements.

Legally, then, Cypress Grove could have ignored the protesters entirely. The company was on the verge of closing escrow on the Gilardoni land, and if the deal had gone through, the only recourse for opponents of the project would have been a lawsuit.

That's why the protesters were so desperately passionate, said Sean Armstrong, a development consultant and one of the most outspoken neighbors against the project. (After the community meeting, he followed Cypress Grove founder Mary Keehn into the parking lot, yelling, "What about my children? How can you do this?") Armstrong said the county's decision to allow the dairy without requiring a permit was ridiculous.

"This is some of the worst farming that's been proposed in Humboldt County, period," he said in a phone interview last week. He described Cypress Grove's proposal as a textbook CAFO -- a concentrated animal feeding operation. It's factory farming at its worst, he complained. "This is just another big company trying to do an end run" around regulations.

Cypress Grove management disputes that characterization. "If nothing else, we've been great neighbors and good stewards of the land, a very good, community-oriented company for almost 30 years now," said Bob McCall, Cypress Grove's sales and marketing manager. "Nothing has changed with the acquisition by Emmi. We are an independently operating company in every sense of the word." The parent company's only involvement, he said, is providing funding for the project.

The design was based on European goat dairies. The goats would have access to the outdoors, though with Humboldt County's wet weather they would probably choose to be inside most of the time, McCall said. Their poop would drop into hay bedding, and three or four times a year the waste would be removed, placed into three-walled concrete holding areas and composted.

"This we can say without a doubt: Our facility would have the healthiest goats in Humboldt County," McCall said. How does he know that? "We know what's good for goats, and we looked into this style of housing them in great detail."

Many Arcata residents, including elected officials and Arcata Eye editor and publisher Kevin Hoover, were disappointed that Cypress Grove pulled out less than 24 hours after the now-infamous community meeting of June 13. "The shrill voices of certain people drowned out the reasonable questions that could have moved us through the project," Arcata Councilman Shane Brinton said Friday afternoon.

At last week's meeting, after some hand-wringing and widely distributed recriminations from residents on both sides of the debate, the Arcata City Council approved Brinton's motion to investigate potential Plan B options for the Gilardoni property. Somewhat reluctantly, the council directed the city's Open Spaces/Ag Committee to look into funding sources for a possible conservation easement or agricultural incubator project on the land.

Lisa Brown, an Arcata resident who serves on the Open Spaces/Ag Committee, is one of the leading advocates for keeping the property in agricultural use, though she's determined to see a less intensive version of ag than what Cypress Grove proposed. She's hoping the city will try to acquire the Gilardoni property, a proposal that was met with skepticism by the council. Brown told the Journal last week that her main concern is protecting the area's prime agricultural soils. "They're important, so they are a community concern -- even though they're privately owned."

That's right, privately owned. Since the Cypress Grove deal fell through, the Gilardoni property still belongs to Marla Daniels and Rayelle Niederbrach, sisters born and raised in Arcata and now living in Anderson. Their grandfather, Seba Gilardoni, immigrated from Italy by himself in 1901, at the age of 13. He eventually settled in Arcata and purchased several parcels of farmland. Upon his death in 1973 the land passed to his son, Raymond Gilardoni (the current owners' father), who established Gil's Creamline Dairy. For years, 60 to 80 milk cows were housed on the Gilardoni property, and the milk was processed, bottled and sold in glass bottles at a store, precisely where Cypress Grove now makes its cheese. Raymond died in 1998, his wife Helen died just a year and a half ago, and the property passed to their two daughters.

One of those two, Daniels, has found this whole series of events a bit galling -- from the community uproar that caused Cypress Grove to back out to all the discussion over what to do with the property now. In a phone conversation last week she said she's tempted to do something unpopular just to spite the neighbors. "You know what I would really like to do? I would like to put pigs on it," she said. Or maybe they should get it rezoned, she suggested, put some low-income housing there, or even a Walmart. She laughed at the thought. "No, I'm kidding," she said with a chuckle. "I'm not a Walmart fan."

For the time being, she and her sister plan to continue leasing the property to the dairy farmers who have been there since their dad was still alive. But they're bitterly disappointed that the goat dairy didn't work out. "Now we're getting to where they want to tell us what to do with our property? That is ludicrous to me," she said. "What country do we live in?"

The goat test has caused a spate of introspection and self-criticism in and around Arcata. Brinton said it has challenged the city's elected officials to more carefully consider their role in these types of projects. Armstrong apologized for yelling at Mary Keehn, both personally and in the pages of the Eye. Nonetheless, on July 8 he was fired from his contract position as a project manager with the City of Arcata. City officials declined to comment, saying it was a personnel matter. But Armstrong explained that he was fired because of his vocal opposition to the dairy. "I sat down with the city manager, Randy [Mendosa], and he told me point-blank that you're not allowed to be an activist as a city employee. And I was fired two weeks later."

What exactly did the goat test reveal about Arcata? Hoover arrived at a damning conclusion: "Everyone failed," he said. Cypress Grove failed to stick it out when things got heated; politicians failed to get involved soon enough; he personally failed to explain the issues to readers before the deal fell through; opponents failed by succumbing to demagoguery. "Even the supporters failed," he said. "They didn't show up." In a recent issue of the Eye Hoover wrote that incident left "such a stain on Arcata that one can't help but wish for a chance at redemption."

"Capital 'N,' capital 'O,'" McCall said unequivocally. And yet McCall is one of the few people involved who emerged from the incident with his faith in Arcata intact. "It's been, ironically, uplifting because we've had a huge swell of support from Arcata residents," he said. "My own guess would be about 90 percent of the people were in favor of at least having a civil discussion."