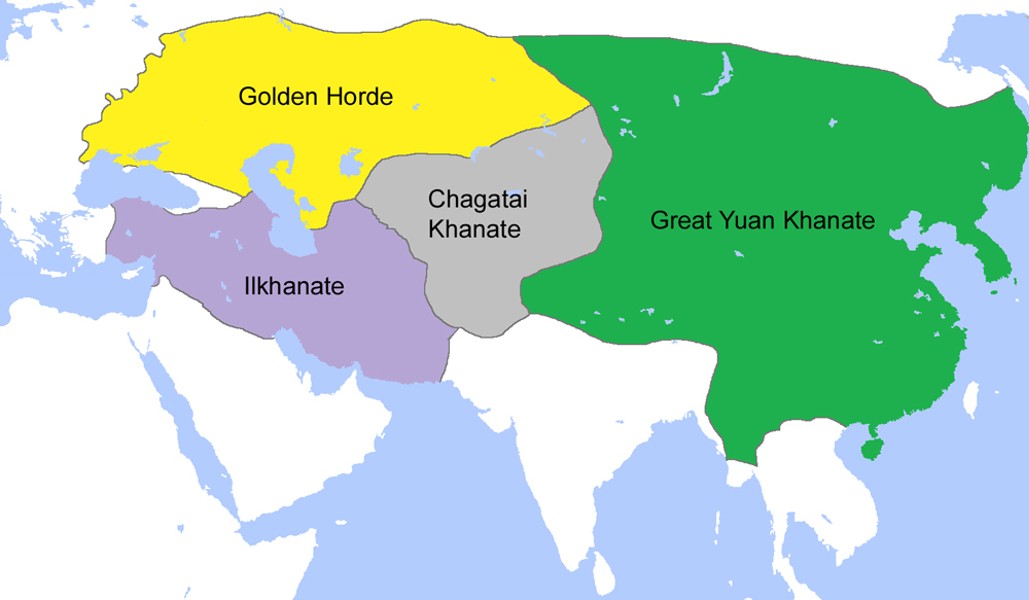 Image by Gabagool, Creative Commons license Following the death of Genghis Khan, the Mongol Empire both expanded and divided into four huge khanates (territories) governed by his eldest sons.

A virgin carrying a gold nugget on her head could walk unmolested from one end of the empire to another." — Persian historian Ata-Malik Juvayni (1226-1283)

Within 50 years of his death in 1227, the Mongol Empire founded by Genghis Khan grew into a vast, contiguous empire under his four eldest sons, each of whom governed his own "khanate." Genghis' grandson Batu, who led the Golden Horde, didn't rule from a grand imperial palace but from horseback. The center of his power was "a self-sufficient, moving capital, a gold panoply that could shelter 2,000 men ... carried on a train of oxcarts," according to Asian history expert Colin Thubron. "The vast expanse of [the Golden Horde] could be covered only on horseback, and the horse was its early lifeblood."

The Mongols were following thousands of years of steppe tradition with their "rule from horseback." Starting around 3500 B.C., the Botai people of northwest Asia were probably the first to domesticate horses, followed by their early Bronze Age successors, the Yamnaya, who roamed freely across the steppes of Eurasia on horseback. Linguists have identified the Yamnaya language as the leading candidate for Proto-Indo-European that eventually — 5,000 years later — led to some 3.2 billion Indo-European speakers today, including us. Not just language, either: Some 50 percent of the genetic heredity of Europe (and 30 percent of that of South Asia) matches genes in DNA extracted from Yamnaya skeletons.

Back to the Golden Horde. At its peak the khanate extended across a vast territory of Eurasia — 2 million square miles — reaching as far west as present-day Turkey, Bulgaria and Poland. Although beset by virtually continuous in-fighting for power, historians refer to the Pax Mongolica (after the Pax Romana) to describe a period of relative peace under a unified Mongol administration that followed their vast conquests, hence the above claim for the maiden's safe passage.

With highly trained archers shooting from the saddle, feet in stirrups (hence our "getting a leg-up" metaphor) and lancers, the Mongols were rarely defeated in battle. As for discipline, the smallest unit consisted of 10 men; if one deserted, the other nine were executed. The might of their cavalry force is illustrated by the Mongol defeat of a huge Hungarian army at the Battle of Mohi in 1241. They later reached the outskirts of Vienna before withdrawing from Europe and only then, after the death of the Great Khan, since the "princes of the blood" had to be present for the election of his successor.

Given the Mongols' overpowering horseback tactics, they might well have ended up ruling all of Europe had it not been for the Black Death (bubonic plague caused by the Yersinia pestis bacterium), which put an end to their expansionist ambitions. The flea-borne disease probably arose on the steppes of central or eastern Asian around 1337, thence spreading westward, carried along the Silk Road by Mongolian traders who survived the plague. It reached Constantinople in 1347 from where it spread throughout Europe, resulting in a staggering cataclysm — between 30 and 50 percent of the population died.

Two hundred years later, the population of Europe was still recovering to pre-plague levels, by which time civil wars in the previously great Mongol Empire, the largest the world has ever known, had reduced it to a mess of squabbling principalities. All we are left with are the stories.

Barry Evans (he/him, barryevans9@yahoo.com), while researching this story, once again gave thanks for vaccines, the all-time greatest discovery in medicine.