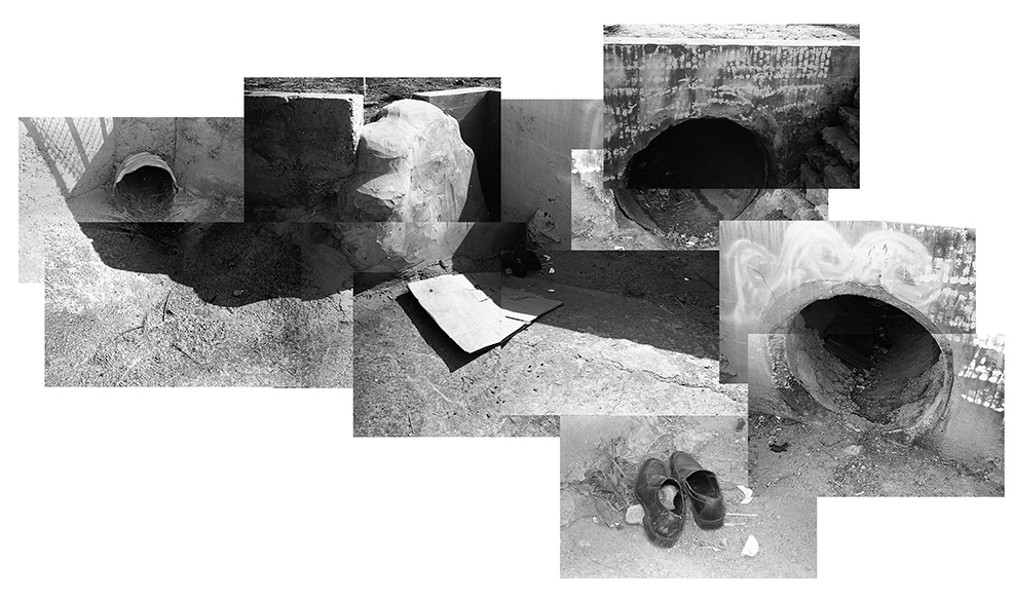 Courtesy of the artist "Ditch" by Elijah Howe.

The annual year-end exhibition of works by Humboldt State University art majors is up at the HSU Reese Bullen Gallery. Curated by the members of the museum and gallery practice class under the direction of Ian Carey, Britt Sheldon and Gabriella Reisz, the show features artworks by graduating seniors in media including jewelry, drawing, painting and photography.

A fun handmade necklace designed by Courtney Junette, described as a "triptych" as though it were a painting, features a hand-forged chain made from interlocking units like wobbly paper clips supporting three iridescent placards that look like tiny solar panels for around-the-neck wear. 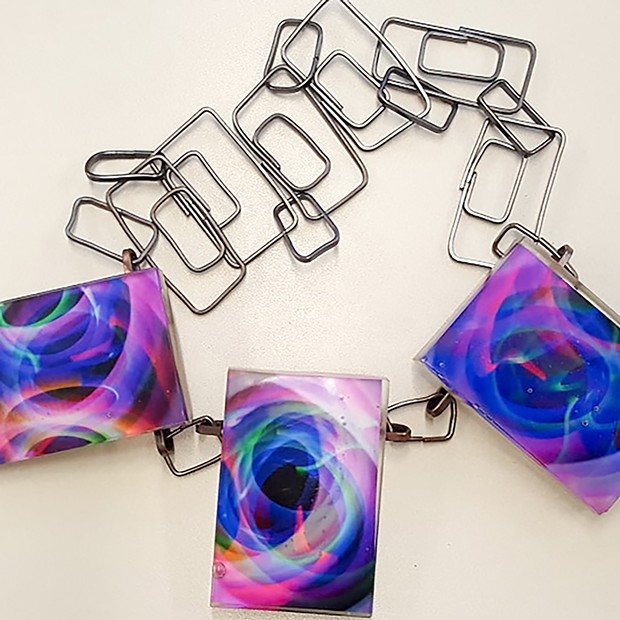 The painting "Sylvia," by Amanda Feathers surrounds a likeness of American poet Sylvia Plath with fern fronds and a pastel mandala. The Plath portrait is painted in a way that honors its photographic source: Contrast is heightened, color desaturated. The mandala and portrait are painted flatly in sepia and calamine pink, while the poet's smock, executed in a painterly array of mauves and blues, attains unexpected dimensionality.

Pairing traditionally religious devotional iconography with a photographically based pop subject is something I associate locally with exuberant portraits of pop icons by HSU painting professor Gina Tuzzi — but in this painting the celebrity canon takes a literary turn, with Plath standing in lieu of Prince. While it's nice to see a poet who died in 1963 getting the full mandala treatment, poets, unlike pop stars, are not usually (ever?) instantly recognizable figures for members of the general public. How the viewing experience might have been different for a viewer who failed to make the connection between the Sylvia of the title, the sepia figure flatly painted to mimic the photographic effect of blown-out contrast, and the larger-than-life author of poems like "Lady Lazarus" and "Daddy" remained unclear. 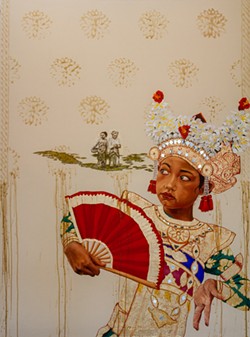 A painting by Naomi Rose Doherty titled "Red Scare: The U.S. Involvement in the 1965 Indonesian Genocide," is structured in three overlapping layers, each of which manifests a different paint handling approach. The base layer is a screen of loosely painted flowers repeated in grid formation, imitating wallpaper. In the lower half of the canvas, the wallpaper flowers start to bleed and run. Hovering in the middle of this are two small, ragged children standing in a heap of dirt or rubbish, painted in sepia so they look like figments of the photographic past. In the foreground, the dainty, hard-edged figure of a different child dressed in the elaborate regalia of a traditional Indonesian dancer sways into view. This young girl cuts her eyes cut to one side in the general direction of the ragged children-icons while she rattles her fan, even though, given their positioning, such a gesture should be meaningless. It's as if she is somehow aware of their existence there in the painting's middle distance. While this layering approach to composition has come in for widespread use in the age of Photoshop, the use of layers to evoke the experience of a dislocated past defined by violent geopolitics specifically recalls the work of Vietnamese American painter Dinh Q. Le.

The photograph "Ditch" by Elijah Howe, more vested in the here-and-now, brings together nine different exposures of culvert pipes to make a composite rendering in detail-laden black and white. Multiple focal points allow viewers to fixate on individual details of this grimy subject. Against all likelihood, some of those details start to seem obscurely significant. For instance, the way the lip of one galvanized pipe projecting from the concrete wall wavers, while another is flush with the concrete surrounding it. The abandoned pair of battered shoes in the foreground of the photomontage seem like placeholders for the photographer. Perhaps paradoxically, in this exhibition it's photographs and photographers — more so than other media specialists — who grapple most directly with the stuff of the material world.

The 2019 art department graduates' exhibition will be up at the Reese Bullen Gallery through May 18. The gallery is located inside the HSU art building at the intersection of B Street and Laurel.