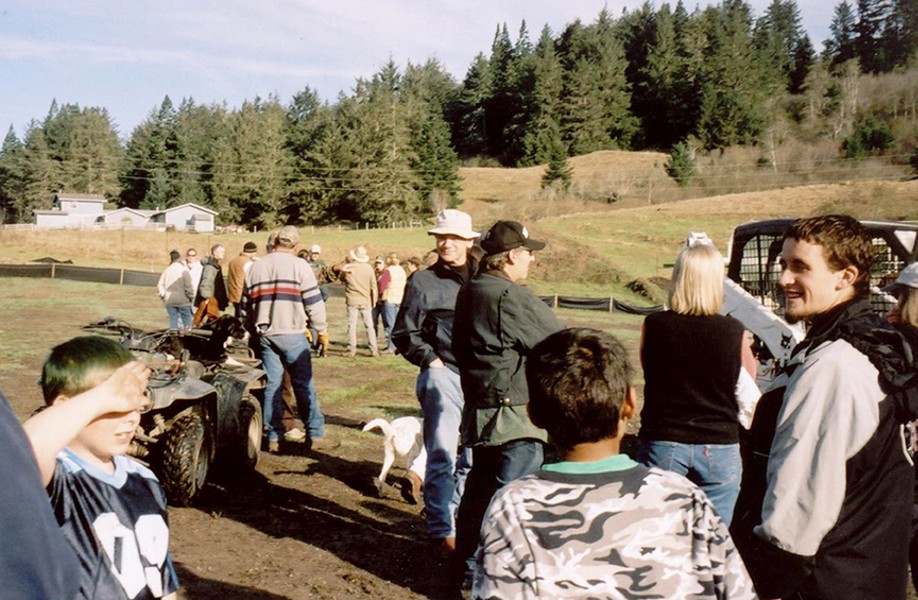 The hunger of deer is no greater than the fury of gardeners who seek to thwart the peaceful vegetarians. Just ask the Humboldt Botanical Garden's deer wranglers, sturdy volunteers who scrambled up steep ravines, picked off bloodsucking ticks and nursed pokes and scratches from blackberry brambles in the great deer round up of 2005.

While visitors to the county's largest public garden today see a safely blooming haven, back then it was human vs. deer, fighting for primacy on 44.5 acres, after a deer herd was fenced in during the garden's creation.

To appreciate the battle, consider the terrain: Perched on a lumpy hill above southern Humboldt Bay, the garden is a narrow piece of land, rising from an elevation of 115 feet at the lower gate to 335 feet up top. The land is steep, riddled with ravines and hills. Any piece of flat ground has been carved by an earth-moving machine.

When the Humboldt Botanical Foundation first leased the site from the College of the Redwoods, it was wild land, roughly a quarter-mile wide and a half-mile long, clotted with Sitka spruce and brambles, twisted willows and cascara. Fencing it off took about a year and a half, according to volunteer David Lemm, who headed the fence construction project in 2003. Humboldt County jail prisoners in the sheriff's work alternative program did the heavy lifting, lugging wire, pounding steel posts and hauling countless bags of concrete up steep slopes. With the help of inmates and fence consultant Todd Phelps, the work came in well under budget and helped earn Lemm a garden volunteer of the year award. But ...

"It is inevitable when a 45-acre area is enclosed by a new fence that a few deer are fenced in rather than out," a notice in the garden's quarterly newsletter confessed in January 2005. So wranglers were wanted. "If you like to bang loudly on pots and pans, sing and beat drums, this is the perfect activity for you," it said. Similar ads were place in local newspapers. Under the helm of Karen Angel, then executive director of garden foundation, the great deer roundup was almost ready to begin. But a botanical garden cannot allow yodeling hounds and pan-banging gardeners to chase pregnant does or fawns.

Much to the chagrin of some, including an executive director and a board of directors, deer have rights, as all wild creatures have in this tamed world, and the California Department of Fish and Game was there to make sure they were protected. Scheduled deer roundups were postponed until late summer.

To this day, the wranglers cannot say exactly how many deer they bested, but they recount those days with grins, laughs and much arm waving. It all started out looking easy, recalled Arcata landscape designer Mary Gearheart. "First just a couple of guys went in with their trusty hunting dogs and tried to herd the deer toward an open area in the fence. When this was only mildly successful, several guys went in with their dogs, again maybe a couple of deer herded out."

Next, wildlife biologists advised that the technique to herd deer was to form a human wall, holding hands and bed sheets. To be effective, the wall was to cut through the entire garden in one wide swath, up and down, through huge gulches that weren't easily crossed, with the bed sheets filling in the gaps because there weren't enough volunteers to cover the territory clasping hand to hand. And what happens when a frightened wild deer comes face to face with such an apparition?

"As we started out on that last sweep, a deer came running right for where I was holding a sheet and I knew right then how futile and foolish it was to think we could stop a frightened deer," Gearheart wrote in an email. "And as we dropped the sheet in fear, the deer leapt right through, clearly ready to sail over our heads if need be."

Even so, on that Aug. 20, 2005, roundup, five deer were flushed out and the wranglers were tasting success. They shook their sheets and tried again.

There were four official deer roundups that August and September, mostly on early Saturday mornings and once during a full moon. Loleta resident Tennie Brooks helped with all four, and vividly remembers the full moon roundup, when the deer posse assembled in silver light and deep shadows. "It was so much fun," she recalled. The group whooped it up with yelling and pan banging, yodeling and drum beating. "We made lots of noise, but I don't know if any deer left the garden that night."

Volunteer and master gardener June Walsh remembers the animals' recalcitrance. As teams rallied to chase them out, "the deer had other things in mind. Several volunteers reported that one had looked them right in the eye and run past them back the way they had come, deeper into the garden. It all made for great stories for the after-chase coffee."

Two years and countless person-hours of shouting and stomping later, the herd was whittled down to three. Deer had nibbled to the bone all 30 of ceanothus "Julia Phelps", a so-called deer shrub, according to Walsh.

Finally, under the direction of Fish and Game, the garden foundation authorized the building of a baited deer corral at the northeast end of the garden. It went up in 2007, fencing one acre of range land. A one-way gate allowed deer to enter from the garden — but not to return. They would be released through another gate.

With irresistible bait and a bit of patience, stalwart gardeners finally enticed the last deer to quietly mosey into the enclosure. "Finally the day was won by the smell of apples! And a one-way gate," Walsh wrote in an email.

These days the cultivated portions of the Humboldt Botanical Garden are no longer lonesome moonscape beds dotted with tiny plants. Named gardens are voluptuous with bush and bloom, foliage wildly pushing into the winding paths. The ceanothus "Julia Phelps" are a husky 4-feet tall and 6-feet wide. The former wranglers weed, dig and prune in deer-free abundance. Volunteers and staffers regularly patrol and mend the heavy gauge, 7-foot-tall game fence. And at times, in the mists of a late winter dawn, some hungry doe taps her nose on the entry gate, eyeing the roses beyond.