The Handshakers Find Their Place 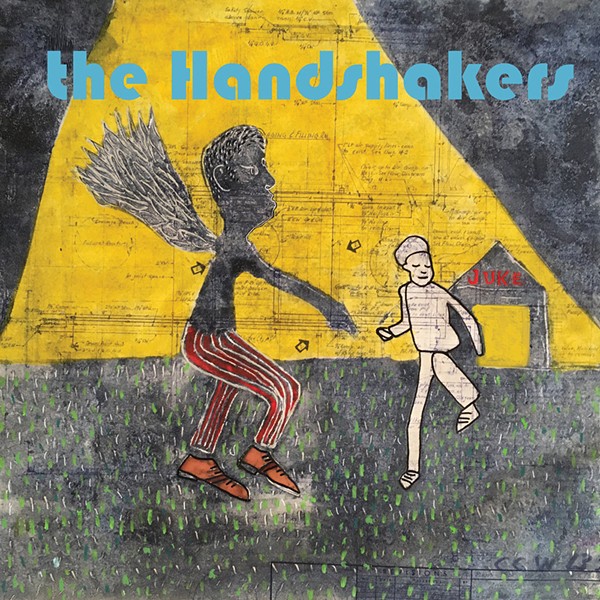 All albums have their proper element, a setting where the music makes the most sense. David Byrne once noted that music is built for specific spaces. Cathedrals were made to hold certain sacred sounds and vice versa, while stadium rock doesn't make any sense outside of the thin PA systems of famous ballparks and the boombox the roofers brought to the jobsite. You don't play AC/DC in a church unless you're an asshole.

With that in mind, I decided to enjoy music of The Handshakers' self-titled debut album in the places where it made the most sense to me: live at The Logger Bar during their March 2 show with Barnfire and on the stereo of my 20-year-old Chevy S-10, driving around our beautiful county. The plan almost fell apart when the CD player didn't fire up, but an assist with my pocket knife brought it to bear.

Sequencing is an important and often overlooked aspect of a record. I've always adhered to the tradition of putting the strongest songs first so as not to bury the lede. The Handshakers accomplish this deftly on their debut. Guitarist and luthier Michael Walker's song "Gravity" opens the score and his sweet tenor vocals accompany the bright but sad tune. Next up is "Not Alone," which might be the hit of the 10 songs. It certainly landed well at the Logger, with a big loud start giving way to a ballad punched up with the rough vocals of the album's other songwriter, fellow Georgian Mike Bynum. The band does what it does best on this track, with drummer Paul DeMark and bassist Gary Davidson providing a dynamic and utterly solid rhythm bed, while pedal steel player Aleister Paige provides perfect melodic bursts to buoy up the two songwriter guitarists.

The record settles into what it truly is for the next eight tunes: a country and roots gem that straddles No Depression-era emotional complexity with near-perfect arrangements and just enough blues and honkytonk to make the whole thing fun and danceable live. I look forward to future shows, which, sadly, I am told will not include Mr. Walker, although a capable replacement was found in Barney Doyle for live lead guitar. The best debuts leave you wanting more, happy though you are that the CD player has kicked back to track No. 1 as you hit the Clam Beach exit and consider a drink at the tavern. I await The Handshakers' sophomore effort with a steady eagerness, as do others in plenty of old trucks and good barrooms.

Collin Yeo writes the weekly Setlist music column for the Journal. He lives in Arcata.