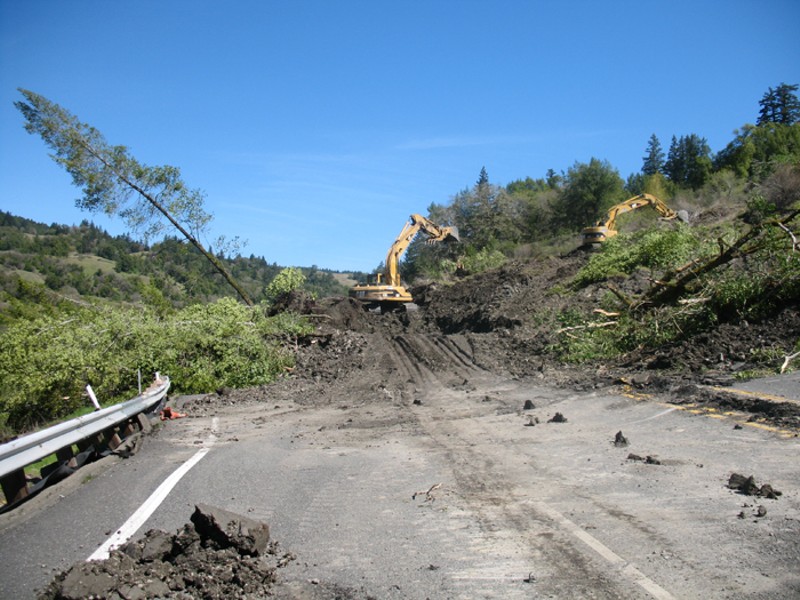 Photo by Felix Omai. Caltrans and its contractor Shea Construction, out of Redding, got busy cleaning up the slide and soon had a mud path open for emergency vehicles. 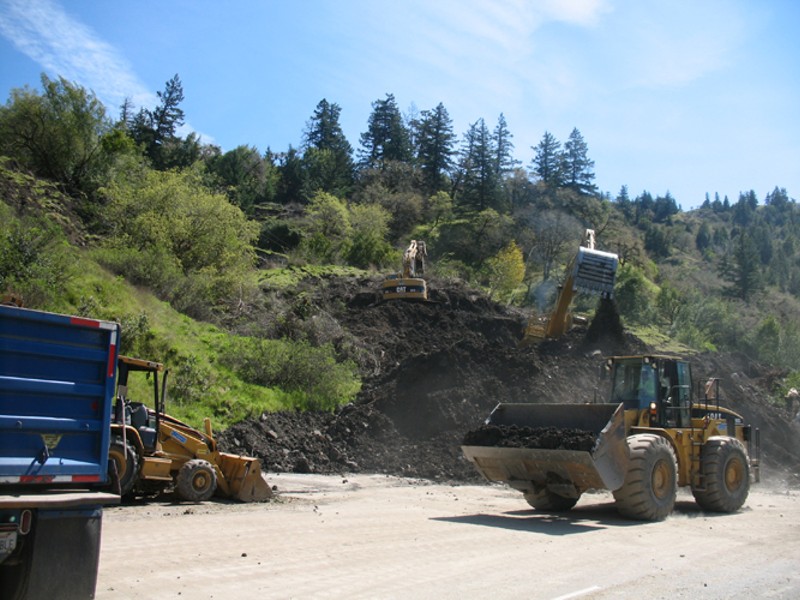 Photo courtesy of caltrans By Tuesday, there were two paved lanes. 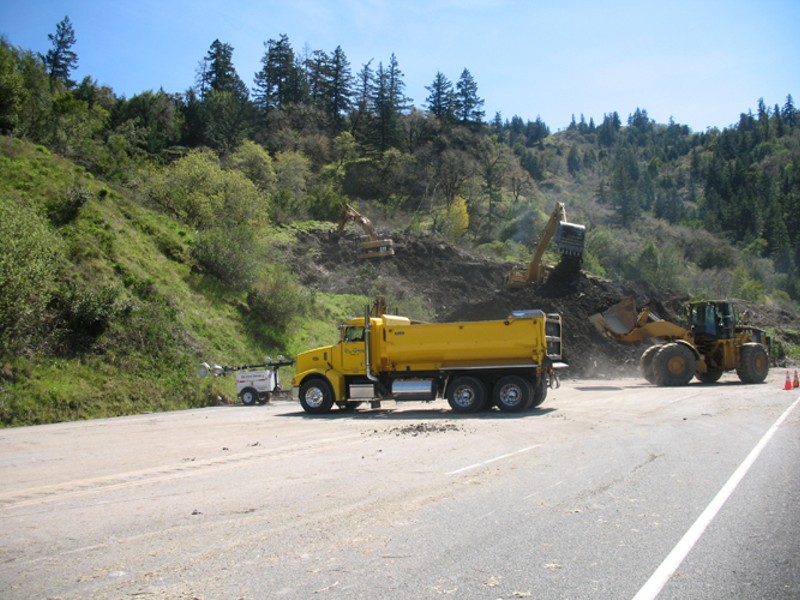 Photo courtesy of caltrans Local contractors joined the cleanup later, helping haul away debris to various locations, and by Monday one paved lane was open to controlled traffic. 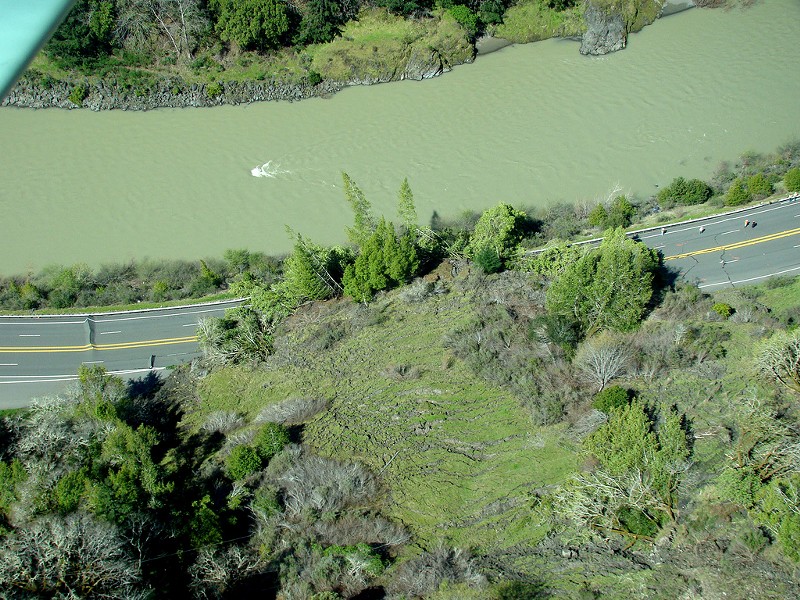 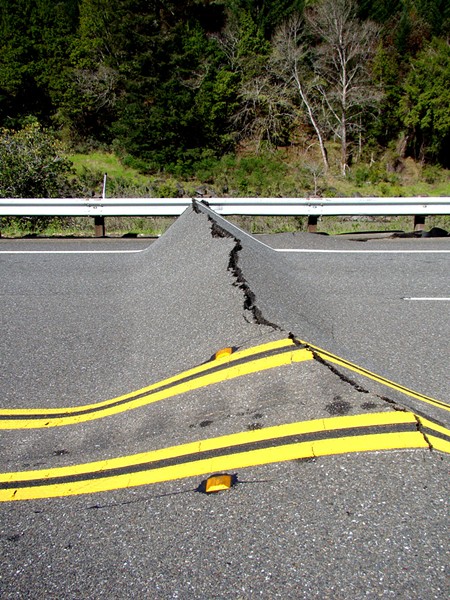 Photo by Felix Omai. More of Omai’s photos can be seen on KMUD New Department’s gallery at kmud.org. 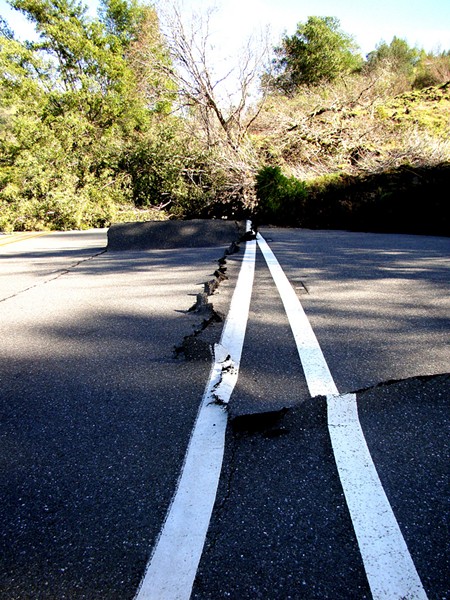 Photo by Felix Omai. The impact of the slide buckled the road. 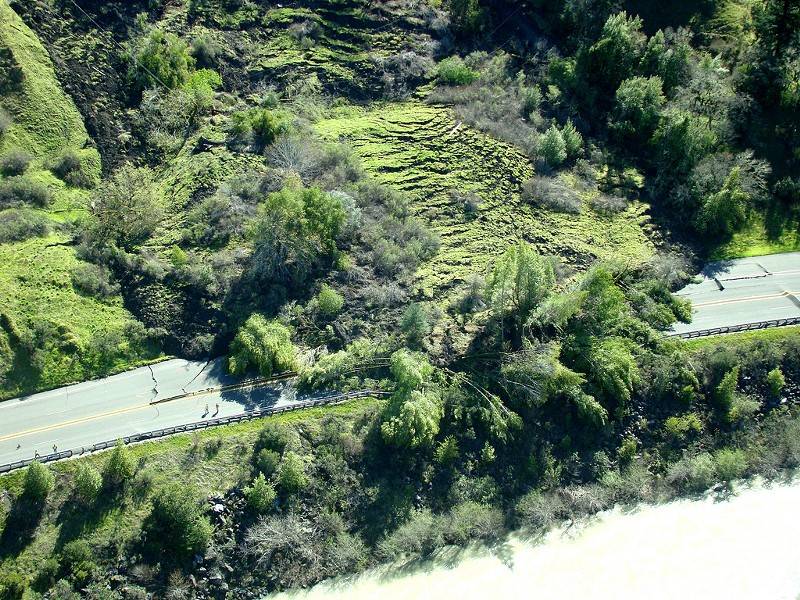 Photos by Felix Omai. Not long after the hillside slid onto Highway 101 near Dean Creek, about five miles north of Garberville, photographer Felix Omai was up in the air. 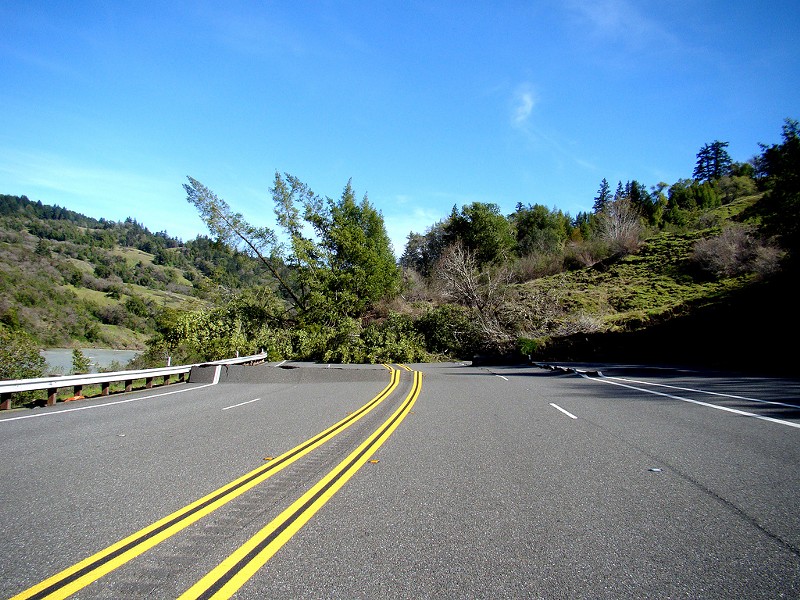 Photos by Felix Omai. Omai, who lives in Garberville, hired pilot Jesse Gray to fly her over the slide scene, where she captured these amazing photos.

At around 9:20 a.m. last Wednesday, a chunk of hillside in Southern Humboldt slid onto state Highway 101 several miles north of Redway/Garberville. It buckled the road and blocked all four lanes, forcing residents and travelers, goods transporters and even ambulances to adjust their destinations or use alternate routes -- dodgy, narrow, storm-wracked county backroads nearby or major detours on other highways. Three schools closed. Businesses braced for the impact.

About an hour past midnight, Caltrans' crew and a contractor had scraped a path through the muck for emergency vehicles (and gasoline trucks). By Monday they had paved one lane and opened it to controlled traffic. By Tuesday, two paved lanes were open for two-way traffic. People rejoiced.

But the hill is still creeping. And that's no surprise. As anyone who's spent any amount of time in Humboldt County or anywhere in Coastal California knows, the hills are always creeping -- sometimes crashing. For that 600-feet-wide, 1,500-feet-long, dozen-feet-deep, tree-spiked mud monster that ate 101, a week of tweaked human schedules was a mere fraction of a flick of time, because it began its life 120 million years ago.

Back then, it was part of an underwater accumulation of marine mud and tiny critter corpses in the transition zone between the continent and the deep ocean. As the Pacific plate dove under the North America plate, its hardened mud mass was sheared, broken and faulted into a new complexity, explains Harvey Kelsey, a geology professor at Humboldt State University. At that time what we now call the Mendocino Triple Junction was also at play in that region, with the Gorda Plate, shoving roughly northeast, converging upon the North America and Pacific plates, uplifting the broken-up mass and further deforming it. (The MTJ is still highly active but has migrated north beyond the South Fork Eel region, which is now part of the San Andreas Fault system, says Kelsey).

Over time, as the rocks uplifted they also eroded. Uplift and erosion continues to this day, creating steep slopes. Sometimes logging or a roadcut might enhance a slide's potential, says Kelsey, but he notes that slides also happen in places where there has been no logging or roadcuts. One of the main problems in the South Fork Eel River region is the rock is mainly shale, which doesn't drain water easily. "So it becomes this goo as the water seeps in," Kelsey said.

When it goos up sufficiently, it slides. And it goos up often, especially after prolonged, heavy rainfall. In the six weeks before this latest big 101 slide there had been a steady deluge. The National Weather Service's Mel Nordquist says 11.88 inches fell in Eureka, making it the third wettest March there on record at 214 percent of normal. In rainier southern Humboldt, for which long-term data is less complete, it rained even more in March: 16.47 inches at the Eel River Camp, close to the slide (and that's missing a few days' data), and 43.22 inches in Ettersburg, near Shelter Cove.

"But there are many other times when it's rained almost as much," said Nordquist. "March is often wet."

Other months are, too. But never mind that: People moved into the shifting hills -- so lush, so green -- and settled on the lumpy landscape with its silty streams and rivers. They built foot trails and wagon roads and a railroad, dirt tracks and paved roads and the heavily traveled Highway 101. They dealt with a perpetually gravity-conceding Confusion Hill slide on 101 until finally a reroute and bridge solution eased that worry. And they've put up with myriad other slides, besides the recent big one on 101, that have dropped rocks on other state highways, nibbled at county roads and erased chunks of homesteads.

Why do they stick with it? Well, it seems the sort of humans who choose to live on such unstable ground often are, ironically, quite steady themselves. They don't whimper; they spring into action.

Not long after the slide happened, and Caltrans and the CHP had sent out their news alerts, local radio stations, KMUD and KHUM in particular, were on it, interviewing experts and providing updates. Some residents, such as Felix Omai, went up in the air as well as directly to the scene to shoot photos (some of Omai's spectacular work is featured in these pages). Local blogs, including the just-launched Lost Coast Outpost by Lost Coast Communications' Hank Sims (former NCJ editor), carried these photos plus alerts and updates, and fielded questions and comprehensive advice from community members.

Distinguished among the locals news sources were Kym Kemp's Redheaded Blackbelt blog and Bobbi Wisby's SoHum Awareness Facebook page. Kemp's blog carries raw reportage and photos of the 101 slide and other slumping areas; her second post about the 101 slide, "OMG, The Hill Ate the Road -- Photos from the Highway 101 Slide," featured a thorough spread by photographer Kim Sallaway. Wisby's SoHum Awareness page launched on March 27, three days before the 101 slide, with a link to a post on Kemp's blog about a slide that had closed Briceland Road. Wisby started the page to connect residents to news on road conditions, weather hazards and "other threats to our safety and ability to move around," as she notes in the "About" section. It blossomed after the 101 slide, providing up-to-the-minute reports, with maps and photos, on the slide as well as problems on alternate routes such as the then-still-snowy Dyerville Loop Road; Wisby soon added Kemp and local newsie Estelle Fennell as administrators to keep up with the reportage.

With such community guides, everyone more or less went about their business.

The morning of the slide, Karen Helser, head bartender at the Riverwood Inn in Phillipsville on Avenue of the Giants, north of the slide, was still at home in Garberville, south of the slide. She hustled to town to fill her gas tank, then picked up her two nieces at school and drove the long, winding backroads to drop the kids off at home in Phillipsville and go to work. It took her two and a half hours, about two hours more than the straight shot down 101 normally takes. After work she decided to just stay at the Inn over the next several days, until 101 opened again.

The Riverwood, meanwhile, canceled a concert it had scheduled for that weekend, and lost its five room reservations. The band, coming from Ukiah, could have taken the long route over I-5 and State Route 299, then down 101, but the 100-plus folks who would have come to listen live in Redway and Garberville, on the other side of the slide. It's doubtful they'd have bothered with the backroads just to get to the show, said Riverwood owner Loreen Eliason. Locals on the Inn's side of the slide were still coming in, though, getting cash back from her ATM machine, buying dinner and drinks and plopping quarters into the games and jukebox.

"We need more quarters!" she said on Friday.

Eliason lives on Elk Creek Road -- one end of the Dyerville Loop Road, which is part of the old Oregon Trail. After the slide, that and other routes became clogged as folks tried to get around it. Harry Metaxes, who lives "way out in the mountains" off the Eel Rock Road, the north piece of the Dyerville Loop Road, was on his way home from Willits that morning. He was listening to Sinatra on 106.3 as he passed through Garberville, when he saw the sign: "Road blocked."

"So I flip over to KMUD," he said. "And it's, ‘Big slide! Road closed for three weeks!' I said, ‘Oh bullshit.'" He got on the Loop Road and followed it over the ridgetop -- a route only locals should have been on. "And there was every city slicker driving a mini Volkswagon that couldn't drive on that road, and there's one-way stretches out there, and I pulled out two or three people [who'd gotten stuck]. The snow was about a foot and a half deep on either side, and the potholes were so deep they had echoes in 'em."

As for the 101 slide, Metaxes, who's built roads and power plants and such all over the world, said that hill's been sliding for "God knows how long."

In Weott Friday afternoon, Bill White was finally putting his feet up in his yard. A county roads supervisor, he'd just worked 19 days nonstop monitoring and directing work. Many of the roads were in bad shape before the rains hammered them more; the onslaught of traffic skirting around the slide didn't help. He'd even seen a big Brinks truck passing through tiny Blocksburg. White knew there'd be more work waiting for him later. But he was philosophical about the slide and the detours.

"For the truly local people, it is maybe a bit of an inconvenience," he said. "But it gets them out of their daily routine and forces them to explore their own back yard."

Over the phone, a rooster could be heard crowing in White's yard. Then there was clucking.

"It's a little sunny, a little hazy," said White. "The peach tree's blossomed nice, I have my babbling brook, and three of the hens are sitting on their nests already. ... In Humboldt County, you can't let anything upset you."