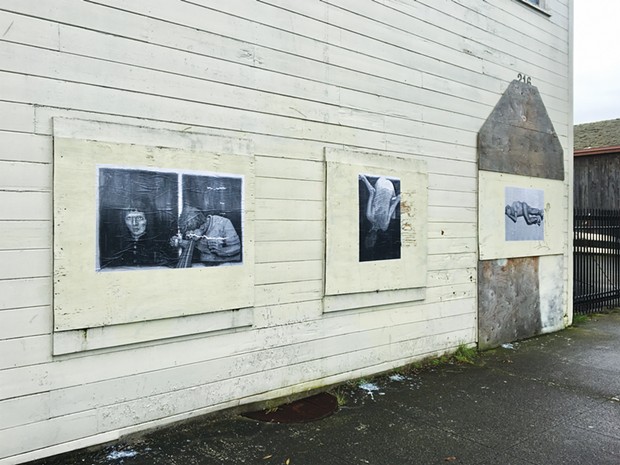 Heroin Hilton, Jesse Wiedel's guerrilla public artwork, hit Eureka's streets in the early afternoon hours of Dec. 7. Five oil paintings materialized in Old Town with no advance publicity, just as crowds gathered for the monthly Arts Alive! event. Bolted onto plywood sheets boarding up the windows and door of a condemned building near the corner of Third and C streets, the panels represented a shambolic quintet engaged in drug-addled public shenanigans familiar to neighborhood observers from prior years when the building was locally notorious as a drug house. The project's title is derived from the apartment building's long-standing nickname.

The dysfunctional display was fairly hideous. But also, if we're being honest, much of it felt hideously familiar to anyone who regularly travels U.S. Highway 101 through Eureka. A man slept on the sidewalk. A nude woman somersaulted over a pull-up bar. Nico, the singer from the Velvet Underground, stood at the building's window alongside a nameless companion ralphing up a technicolor vomit stream. A long-haired, gap-toothed vintage delinquent reached out another window and tipped a long brown stream of bong water from his pipe to the ground. At street level, a middle-aged woman in a tube top straddled an undersized BMX bike and flashed a coprophagic grin.

The artworks might have been unsigned but their provenance was never in doubt. Executed in a gritty, caricatural style, Wiedel's compositions look like what you might get if you divided the square root of John Waters and Nan Goldin by Robert Crumb. Wiedel has staked a claim to some of the region's blackest comedy in a series of exhibitions stretching back more than a decade, representing gonzo content more commonly encountered within the unwholesome precincts of satirical social media accounts like Only in Humboldt and Sexy Eureka.

His latest intervention generated substantial comment during its brief exhibition run, which lasted at most 10 hours before the paintings' unscheduled removal. "I thought I was just doing stuff on a condemned building," the artist told me. The building had indeed been condemned in 2017 but the property had since been sold. Soon after the paintings' disappearance, the Lost Coast Outpost reported that the owner had removed them from his property under cover of darkness.

"I knew it wouldn't stay up long but I thought I would at least get 24 hours out of it," the painter marveled, noting, "a lot of people were asking, 'Can I buy that?' on that same day." Despite the short run, Wiedel says, "I'm happy with it." His efforts to contact the receiver had not been successful, he said, and the present location of the Heroin Hilton paintings remains unknown.

Still, no image ever truly disappears in the digital age. On Feb. 1, a sequel unfolded, once again timed to coincide with Arts Alive. Snapshots proliferated on local social media as the news reverberated. The paintings themselves had not returned but black-and-white facsimiles fixed with wheatpaste took their places on the boarded-up window and door frames, like a ghostly echo of the rude initial blast. 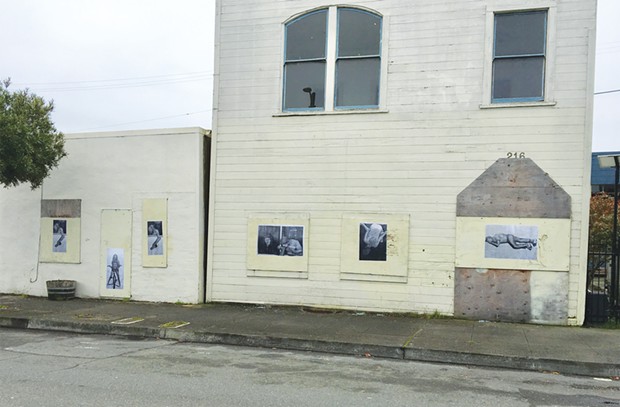 "I was able to print large images that were almost the same size as the originals, using a map printer," Wiedel explained. "I assumed they would be destroyed in the same way." He was correct in this regard — although Heroin Hilton 2.0 enjoyed a longer exhibition run than its predecessor, with the images staying up for at least one and possibly as many as three days before succumbing to whitewash. Even then, unknown parties "just put white paint over the wheat paste," Wiedel noted. Afterimages of the afterimages can still be seen, white on white, appearing quite tastefully minimal at this point.

Painted primer white and boarded up since its condemnation, the erstwhile "Heroin Hilton" doesn't look like much. But being located across the street from the Shanty, a dive bar with a cadre of creative-profession regulars, has its advantages — notably, a built-in audience. When painted agents of chaos appeared that first Saturday in December, seeming to bust out the windows and doors like punch-drunk cuckoos emerging from a Swiss clock in the throes of psychotic break, it was largely for the benefit of the Shanty crowd.

On a recent weekday, Shanty patrons familiar with the history of the building across the street said they had been both appalled and entertained by the comic-tragic pageant of malfeasance issuing daily from within. "In summer, they'd open the door and you can just watch things go down in the house across the street. I've been watching people over there for years." Most of the painted characters, Wiedel added, had been based on direct observation. "The guy pouring the bong out? I saw him do that. Poured his bong water out from the upstairs window of that building, it was super funny. I told my friend, 'Welcome to Eureka!'"

The chaos came to an end three years ago. "It was sad — all the people left and the building was boarded up. It was stagnant. You don't want to have people living in squalor," Wiedel mused, "but you don't want 'em kicked out of their homes either. I appreciate the human presence."

The Heroin Hilton paintings are likely gone, along with the people who inspired them, but Wiedel's photographs of his originals show a color palette skewed toward dusty Band-aid pink and lurid aqua, like California gone a little rancid. Paint handling embellishes all the gnarly parts. Prematurely aged faces, touched by hardship and addiction, and crisscrossed by facial tattoos, might as well be captioned, "Kids, don't do drugs."

The caricatures' brutality is balanced, to a degree, by the painter's lack of condescension. Wiedel's subjects have the kind of freedom that is, like the song goes, nothing left to lose, and their grotesque antics frequently expose them to ridicule. However, the satire in these paintings never comes across malevolent. You get the sense that the artist respects his subjects' self-appointed exemption from social codes, the trouble they pose to authority and the Rabelaisian appetites they pursue.

With an exhibition of his paintings currently on view in Joshua Tree and a major show of 65 paintings coming up in Zurich this fall, Wiedel doesn't necessarily need to operate at the margins. Rather, he sees merit in this kind of hyper-local action. "Just about everything has got some kind of cultural gatekeeper on it," he observed, "including the street art. And a lot of the art I see is decoration." It is in fact hard to imagine a local institition sanctioning work this rude and realist. The project's charge derives, in part, from the fact that it was designed to repel institutional sanction. "I'm OK with decoration," the artist said, "but I like art that's got some story behind it."

Gabrielle Gopinath is an art writer, critic and curator based in Arcata. She prefers she/her pronouns. Follow her on Instagram at @gabriellegopinath.