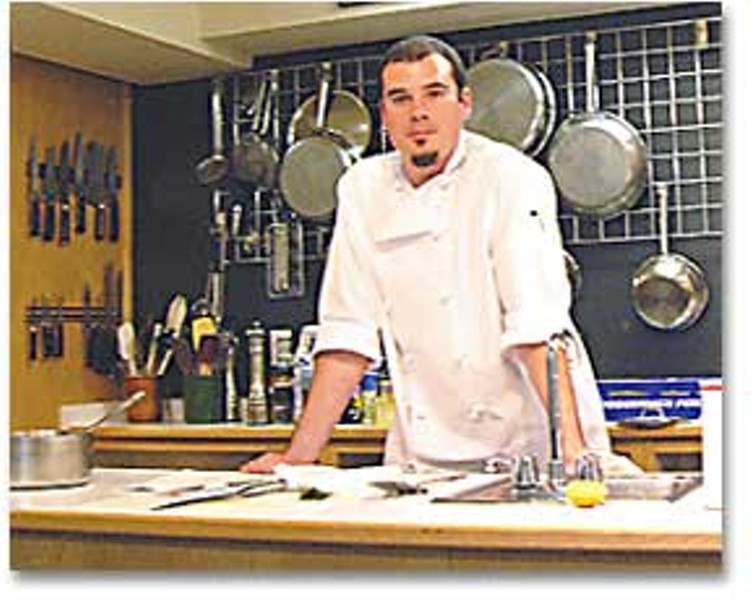 My brother-in-law Chris first hipped me to Iron Chef, a Japanese cooking show he described as "surreal." Originally titled Ironmen of Cooking, the TV program featured a mythical "Kitchen Stadium" maintained by an equally mythic Chairman Kaga, who pitted his team of Iron Chefs against illustrious challengers in a timed battle/race to prepare a collection of dishes based on some theme ingredient, which were then sampled by celebrity judges. A major hit in Japan after it launched in 1993, the program was picked up by the then-nascent Food Network in a dubbed version that was indeed surreal, with dramatic music and campy commentary that somehow gave the battles the feel of kung fu flicks. The original show ended in 1999, with a few follow-up specials. The Food Network later created its own stateside version, Iron Chef America, which runs to this day.

Chef Eric Nelson had Iron Chef on his mind when he began the planning for this weekend's benefit for the Sequoia Humane Society, an organic vegetarian feast since dubbed "The Humane Gourmet."

"Originally we were going to set up a culinary competition with three teams of three chefs each," said Nelson, contacted at his home in Arcata. "We were all going to come up with an organic vegetarian meal. The idea was to do something along the lines of Iron Chef."

Unfortunately it was not meant to be - not right now, anyway. "All the chefs kept pulling out. I went through roughly 25 chefs and multitudes of teams as people dropped out. It wound up being way too much of a hassle so we dropped that idea. We may try another go at the competition, probably in the spring. I'd really like to do it."

Nelson, who has worked at a number of local restaurants, is currently employed at Wildplatter Café at Wildberries while working toward a degree in business at HSU with a nutrition minor.

"I've been here [in Humboldt County] five or six years now. Just after I graduated culinary school at American River in Sacramento I moved here and started working at Plaza Grill.

"I love it there," he said with enthusiasm. "You get benefits, and I'm getting paid more than at most places I've worked at around here -- but I still work part time at Abruzzi and Plaza Grill and pick up shifts at Hurricane Kate's and Kyoto every now and then."

He saw creating a high-end ($75 apiece) seasonal vegetarian menu for this week's benefit as a creative test. "I wanted to come up with things that I hadn't done before, things that stretch my limits, that challenge me. I started coming up with tertiary and binary flavor components and made the recipe list around that - things like the warm cherry and port wine soup; I had those two main ingredients and made a recipe around them by experimenting."

He's particularly excited about the pasta course, a trumpet oyster mushroom ravioli with parsley and truffle-pressed pasta. "I just dreamt that up one day. When I was in culinary school we used to compete with each other, break up into teams and face off, kind of like on Iron Chef. One of my team members came up with this dish with really thinly sliced potatoes and leek sections. We pressed herb leaves between them and fried them off, then used those as garnishes. I've seen that a couple of times since then at various restaurants and in cookbooks.

"That was the inspiration for the pressed pasta. I want to make the pasta transparent, so you can really see the slices of truffle. We'll blanche them in oil for a little bit so they get nice and soft and put them between the pasta sheets. I think it will make for a well-rounded plate, fragrant with the herbs and almost floral with the truffles. I have the money to spend so I figure I might as well do all I can. I want to make it a special experience for everyone that comes."

Nelson has assembled a talented staff to assist him, including Dan McHugh (formerly of Folie Duce, now a co-worker at Wildberries), Eric Moore (formerly of Avalon, also a backstage chef at Reggae on the River), David Hamilton (caterer from Plaza Grill) and Sarina Nystrom (former manager of Spoons at the Arcata Co-op).

Here's the menu they'll prepare, based on ingredients donated by Wildberries Marketplace (subject to change, of course):

Each course will be paired with appropriate wine from local vintners: Robert Goodman, Fieldbrook Winery and Winnett Vineyards.

Speaking of benefit dinners, this Friday, Jan. 19, is the annualNavy League All You Can Eat Crab Feedfrom5-8 p.m. at the Veterans' Memorial Building at 10th and H in Eureka. League treasurer Joel Morrison explained that the fundraiser helps provide support for the local Coast Guard unit and their families. The menu is pretty basic: fresh-cooked Dungeness crab and more crab (prepared by League member Leroy Zerlang) with butter, garlic and lemon, French bread on the side.

"Then we'll also have green salad, maybe potato salad too," said Morrison. "There'll be some lasagna in case someone's allergic to crab. That about covers it. I'm thinking we'll probably have some sort of dessert, maybe pie or something, but that's not my department. And of course coffee and soda."

Ticket are $22 at the door, $20 in advance, free for children under 10, who hopefully don't care much for crab. Talk to your Navy League friends or call Joel at 443-1178 to find out how to get those advance tickets.

Those looking for something to do in between the crab and the gourmet vegetarian feasts might check to see if there are still reservations available for the Art of Wine Moonstone Crossing Winemaker Reception on Saturday, Jan. 20, 5-7 p.m. at Gabriel's in Old Town. This one is kind of special, a celebration of the Old Town gallery/wine store's anniversary featuring local vintners Donald Bremm and Sharon Hanks. Gabriel's will provide appetizer pairings to complement six new Moonstone Crossing releases: Elysian Fields, Serenity, Barbera, Syrah and Zinfandel Port (all from 2003) and a 2004 Pinotage. Tickets are $30, payable in advance at Art of Wine, 308 2nd St., Eureka. 268-0626. Fair warning: It might be too late. If so, sign up for the newsletter to learn about the next one.

And last but not least, a Valentine Dinner and Dance benefiting Trinidad School Education Foundation on Saturday, Feb. 10, at 5:30 p.m. at Trinidad Town Hall, featuring music by Earl Thomas and The Blues Ambassadors and a catered dinner provided by Hurricane Kate's. Tickets: $50 each. Call Trinidad Union School at 677-3631 for further details.