The Hustle Gets Harder

Doseone of Themselves on the music biz, Strix Vega Round 2, Gypsies and Celts 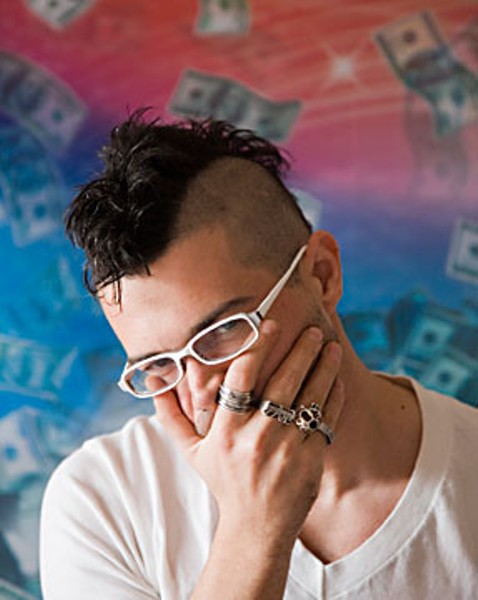 Music maverick Adam Drucker, aka Doseone, or simply Dose, is an artist who straddles traditional boundaries and wears many hats. He started out in Cincinnati as a literate, high-speed, rhythmic rapper, a Scribble Jam champion MC who teamed up with DJ Jeff "Jel" Logan and headed west to Oakland. There he joined forces with like-minded alt. hip hoppers to found the indie label Anticon Records. After shifting gears to make music along more-or-less alt. rock lines with a band called Subtle, and teaming with German indie band The Notwist in 13 & God, Dose and Jel have returned to their roots resurrecting a rap duo called Themselves.

When I called Dose at his Oakland home Sunday he was working on tracks for an upcoming Themselves release, to be preceded by a free digital release, theFREEhoudini mixtape (already teased with an except on Pitchfork). This weekend Themselves are coming north to Humboldt to try out a live act they're taking on the road in March and April with stops at SxSW and Coachella.

A question about how he describes what he does for a living ("artist" or "I make music") soon turned to discussion of the state of the music business. "It's always been a hustle," Dose began. "It was a little scary when everyone started share-stealing, steal-sharing, whatever that nonsense is. CD sales just ... well you know, it was terrible. Everybody was already ripping shit, that wasn't anything new, but the shit hit the fan with consumptive tendencies.

"People are boosting our art. That's not cool, man. I would never steal somebody's painting. In any other form, no one would boost art. People might steal lipstick, cheese, baseball cards; you know those are things to thief. But stealing art is kind of crazy.

"I'm a product of the '90s indie revolution, where we held ourselves accountable for our music, invested in our own stuff, in labels we owned where we got 50 percent of the profit splits. We put in a lot of work to have that. Now, when it shifts to 'all-free,' it's like, 'This boat can't work like that.' It's like a corner store giving away the beer.

"I have a lot, but I don't have a tomb full of riches I can be buried with. All that I have is that I am what I am. It's some Popeye shit. And I can't flash it on everyone, because it doesn't exist in all environments. If I go to a children's health clinic, I can't be like 'I'm Dose! Can I help?' My mass holds no weight there, but in my environment as a rapper, as an honest songwriter, as a creative small business owner, I can say what I mean and have my effect."

You can see Themselves in action Sunday at Hunter Plaid Gallery with Female Fun Records founder Peter "Thanksgiving Brown" Agoston and some configuration of the Starving Weirdos. Saturday at the Pearl Lounge, Doseone and Jel join Thanksgiving Brown and DJ Zanapod to spin some sort of wild shit.

If you've read our review section, you already know that this weekend brings the long-awaited second release by the truly fine alt. something band Strix Vega. I'll leave discussion of Estranged Meadow to our Savage reviewer for now, aside from disagreeing about the worthiness of the opening and closing instrumental tracks. I dig both. (And the droney, ethereal "UFO Above the Pines" is not "prog-rock" as I understand the term.) As Jen notes, the obligatory CD Release Party is Saturday at the Alibi with Side Iron, but Strix is also playing an all ages show Friday evening at Mosgo's with Chris Parreira and Sarahfae, who sings on E.M. (on my favorite song, "Decay"). She'll also join S.V. at the Alibi. The show also marks the beginning of a tour that takes S.V. through nine states on the way to SxSW.

What with Saturday's mission:Critical (with Dub Cowboy), Sundaze with Deep Groove and Reggae/Dancehall Wednesdays, the Jambalaya has become Arcata's DJ-central. This week you can add Thursday to the mix as March 5 brings Russian-born groovemaster DJ Vadim to town laying down innovative music spanning genres, but touching on melodic hip hop and dubwise reggae. Joining him are locals Tanasa Ras (heard most Wednesdays at the Jam) and DJ Danny Corn.

Get funky Friday at Humboldt Brews with Afromassive and The Bump Foundation. "We're callin' it the "2nd Annual Night of a Thousand Funks," says Aaron Bortz from Afromassive, noting that Af-mass will be "featuring the newly reformed traditional West African percussion ensemble Dun Dun Fare (they are on fire these days)." Expect Dun Dun drumming before and between sets.

Kulica is back, playing their "acoustic groove rock" in a post-Arts Alive! gig Saturday at the Red Fox. "We haven't played a bar gig in a LONG time!" they note, adding, "Our drummer Knick has a band called Papa Houli [and the Fleas] and they will be opening the show."

Portland indie psyche-popsters Minmae are on a Cali tour that has them playing with bands like The Blakes at Bottom of the Hill in S.F. So where are they playing locally Saturday? No, not the Alibi, Li'l Red or the Jambalaya -- at the Wave at Blue Lake Casino, for free.

Also on Saturday: the return of Be Brave Bold Robot, an alt. folk combo that calls Sacramento home but has some sort of local connection (including a graffiti campaign). BBBR is strumming and singing at Muddy's Hot Cup with their like-minded Sacto buddies Nice Monster and the always-eloquent John Ludington.

A big week in the gypsy jazz world: First, local gypsy-rock jammers Absynth Quintet have a two-night run Friday and Saturday at the Lost Whale Inn (where you might want to go early for dinner).

Also here Friday and Saturday, for shows at the Wave and Six Rivers Brewing respectively, Dgiin, a cool band from Sonoma County playing what they describe as "French-Gypsy-funk with a Django-esque-flamenco twist." The French part is authentic: Gabe and Mimi, the brother and sister who provide the vocals, are French expats. The references may be obscure for most, but they remind me of Paulo Conte and the now-defunct combo 8 1/2 Souvenirs.

Then there's the Gonzalo Bergara Quartet, playing Tuesday, March 10, at Libation. Native Argentine Bergara, a killer guitarist who once held the rhythm chair in John Jorgenson's dynamite group, has moved to lead, mixing Djangoisms with tango and more. Based out of L.A., he tours with a trio, or in this case, a quartet, which means he'll have a clarinet/sax player with him. Really good stuff. Be forewarned, Libation is a small space, and so far they're not selling advance tickets.

St. Patrick's Day is still a ways off, but the Celtic onslaught is already beginning. Friday at the Arkley Center you can hear Scotsman Donnie Macdonald and Irishman James Keigher, two expats who play Irish and Scottish music as Men of Worth. Sunday afternoon at the Graves The Irish Company Dancers (from the Studio of Dance Arts in Eureka) kick up their heels with some step dancing.

Oregonian fiddler Hanneke Cassel started out playing classical as a girl, then switched to Texas contest style before discovering Scottish fiddling and winning the U.S. National Scottish Jr. Championship. That led her to the Isle of Skye to study with Alasdair Fraser and Cape Breton master Buddy MacMaster. From there it was on to a degree from Berklee and further explorations beyond Celtic. Catch her Monday, March 9, when she fiddles at the Arcata Playhouse.

Last but not least (for this week) is the return of Dervish to the Van Duzer on Wednesday, March 11. With Dervish you have the full-on trad Celtic experience straight from County Sligo, Ireland. The band got its start with pub sessions 20 years ago and with a few personnel changes, most notably the addition of Cathy Jordon as lead singer/bodhran player, it's mostly the same band. Get yer green on early.