The Idiocracy is Upon Us

The Sandler sequel is so bad it's insulting, but del Toro's monsters are fun 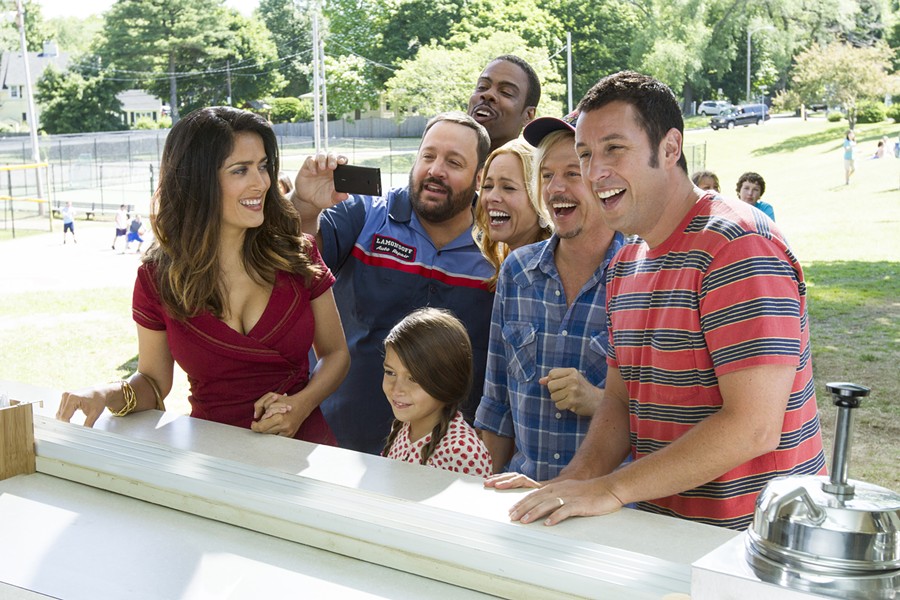 The cast of Grown Ups 2 just can't get enough of "Ow! My balls!"

GROWN UPS 2. Two years ago, when I watched Jack and Jill, it occurred to me that Adam Sandler movies are kind of unassailable. They don't break any new ground and they're not consistently funny, but he and his buddies seem to have fun making them, and they seem generally good-hearted. But this new one is so unfunny, so disingenuous in its pandering, so unpleasant that this review serves as a retraction.

Sandler's career started to take off just as my sense of comedy was forming. His SNL characters, his comedy records, his first few big movies are all vital signposts on my highway of what's funny. That being said, I've never been an apologist: Much of that early work, which I loved so at the time, has grown seamy and center-less with age. Still, the guy's a major figure in comedy and a genuine talent with the ability, occasionally, to do great things. Those things are usually the work of other writer/directors (Punch-Drunk Love, Funny People), but they wouldn't be what they are without Sandler's singular presence.

Up to this point I've quietly appreciated that Sandler's been able to build himself a little media empire without having to compromise himself. I don't necessarily share his crew's love of scatological humor or their bizarre fear/disdain of homosexuality, but the ticket-buying public certainly does. And financial success has allowed Hollywood to become Happy Madison's dream factory, with these stupid Grown Ups movies as the flagship models. (Full disclosure: I've not seen the first installment.)

Sandler plays Lenny Feder, an Adam Sandler type who hits it big in the movies. As the character himself points out, he's inexplicably married to a gorgeous, intelligent woman (the incomparable Salma Hayek). Tired of Hollywood, he moves the family back to his hometown where he reconnects with his well-intentioned, idiotic high school cronies.

Eric (Kevin James) owns an auto body shop, has a disconcertingly clingy relationship with his mother and is, of course, married to an incongruously attractive woman (Maria Bello). Kurt (Chris Rock) works as an installer for the cable company. Marcus (David Spade) doesn't seem to do much of anything, beyond licking the bicep of a bulked-up female bodybuilder and trying to relate to the teenaged son he previously didn't know he had.

They're just a bunch of Average Joes working it out with their families and facing middle age together; it's total bullshit. The guys playing these parts are all extremely wealthy, and they got that way because they tell jokes, not because they're great actors. So to see them pretend to be working-class guys who might struggle to make the mortgage feels dishonest and a little insulting.

The script doesn't even attempt any legitimate character development or authenticity: It's just a blank canvas on which the actors paint their uninspired pictures. This is, without hyperbole, the closest I have ever come to walking out of a movie theater. The impulse to flee set in during the first frame, and I actively fought it for the following 101 minutes. PG-13.

PACIFIC RIM. It seems like the press surrounding Pacific Rim has more to do with its "underperformance" at the box office than the content of the movie. Which is a pity, because co-writer/director/monster-master Guillermo del Toro has once again taken on genre convention and won handily. He did it with vampire movies (Blade 2), underdog comic book superhero adaptations (Hellboy), and Spanish Civil War/coming of age/ultraviolent/magical realism fairy tales (Pan's Labyrinth). Now he's gone even bigger, inventing a whole new type of monster for humanity to contend with.

In the world of Pacific Rim, 2013 marks the beginning of a decade-long conflict with nefarious, intelligent leviathans from another dimension. Called Kaiju, they emerge from a crevasse in the ocean floor with ever-increasing frequency, making landfall to destroy major cities. The nations of the world band together, pooling their resources to build a line of defense. The result is the Jaeger project, a collection of giant hand-to-hand combat robots piloted by small teams of soldiers conjoined by neural networking.

Initially, the Jaegers are devastatingly successful at stopping the Kaiju, but the enemies' intelligence and adaptation eventually render the weapons obsolete. Years later, a stalwart commander (Idris Elba) assembles a crack team of Jaeger pilots for a Hail Mary attempt at wiping out the big bad sea beasties.

Pacific Rim sees del Toro working with his biggest budget ever, so it's not surprising that the visual effects are so damn good. The movie's got an incredible number of process shots, but the attention to detail is stunning and those shots never succumb to the "so real it looks fake" tendency of so many contemporary effects movies.

Equally important: Del Toro is a real director, by which I mean a real storyteller. So even though he had a nine-figure bankroll, he never loses sight of the story's vital aspects. The principal characters are multi-dimensional and thoughtfully developed; the actors inhabit those characters with intelligence and sensitivity; the narrative holding together the gigantic action sequences moves along with consistent, measured intention.

This is the sort of movie that deserves to be a blockbuster. It's a big loud monster movie, sure. But it also has a heart and a brain, and it's deeply compelling. PG13. 132m.

R.I.P.D. Is it just me, or does the trailer for this look like a bad rip-off of Men in Black? Jeff Bridges plays the crotchety guru and Ryan Reynolds the hotshot newcomer in the Rest In Peace Department, a crew of undead police officers out to forcibly send reluctant souls to the other side. PG13. 96m.

THE CONJURING. A pair o' paranormal investigators (Vera Farmiga and Patrick Wilson) try to help a family that's being terrorized by something evil in their farmhouse in this thriller from the director of Saw. R. 112m.

Here's one for us film junkies/scholars/romantics: The documentary Side by Side (2012) looks at the digital revolution in cinema, which has quickly made celluloid film stock all but obsolete. A host of big-name directors including Martin Scorsese, David Lynch and James Cameron debate the merits of each format. Good stuff. Plays Friday at 8 p.m. at the Arcata Theatre Lounge. Sunday's family movie is the feel-good orca flick Free Willy (1993). And next Wednesday's Sci-Fi Pint and Pizza Night centers on Invaders from Outer Space, a 1957 Japanese oddity about a cosmic superhero. 6 p.m.

DESPICABLE ME 2. Reformed villain Gru (Steve Carell) and his cute little peanut minions get recruited by the Anti-Villain League in this charming animated comedy. PG. 98m.

THE HEAT. Sandra Bullock, as an overachieving FBI agent, and Melissa McCarthy, as a brash, foul-mouthed Boston cop, fight crime in this comedy from the director of Bridesmaids. R. 117m.

THE LONE RANGER. Johnny Depp, oh how you have fallen. He plays Tonto in this loud, obnoxious Disney dud based on the old radio/TV show. PG13. 149m.

NOW YOU SEE ME. A group of magicians rob banks and run from the law in this breezy, enjoyable escape. PG13. 116m.

TURBO. The latest from Dreamworks Animation imagines a garden snail who longs to be fast. Voice talent from Ryan Reynolds, Paul Giamatti and Michael Peña. PG.