The unprecedented repatriation of the center of the Wiyot universe 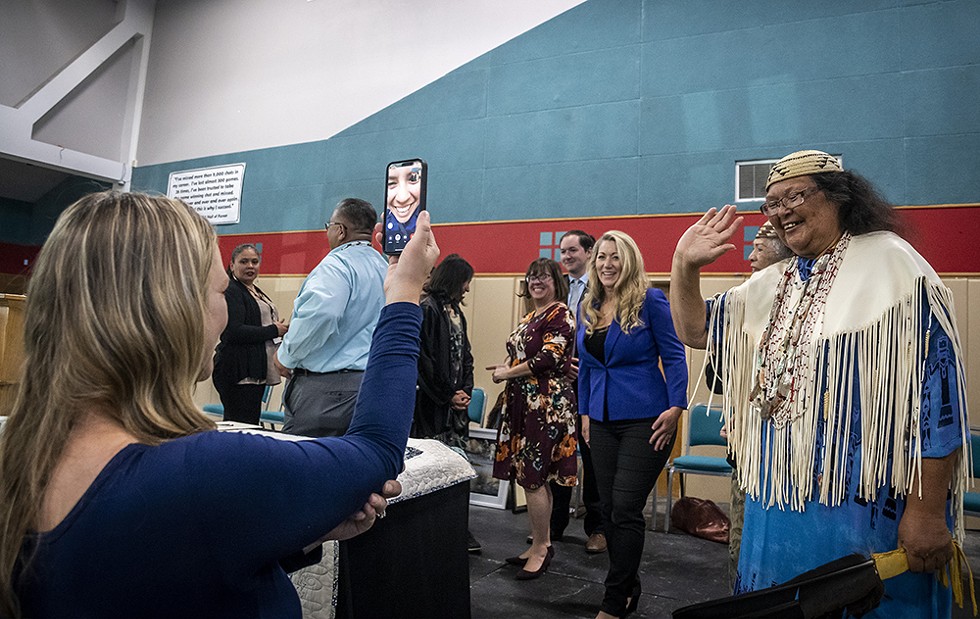 There was a time not long ago when this was unthinkable. After all, when Wiyot tribal officials first called Eureka City Hall to request the return of Duluwat Island in the 1970s, they got laughter in response. When tribal elder Cheryl Seidner tried again a couple of decades later, she heard mostly stutters and stammers on the other end of the phone. Around the turn of the century, when Eureka finally decided to divest itself of a 1.5-acre sliver of the island that the Wiyot people consider the center of their universe, a place with the power to bring balance to all else, the tribe had to hold auctions and fundraisers, sell T-shirts, baked goods and Indian tacos to come up with the $100,000 asking price. When it missed a deadline for the sale, the price went up to $106,000. The city tried to make some amends a few years later, when it "donated" an additional 40 acres to the tribe.


But with five simple words in a packed Adorni Center on Oct. 21, it became official — the island was being returned to the Wiyot people who had lived there since time immemorial until the night of Feb. 26, 1860, when armed white men carried out a coordinated attack on the tribe's elders, women and children, killing scores and driving everyone else away.

"Unanimous yes vote. Motion carries," said Eureka City Clerk Pam Powell, drawing a standing ovation from the hundreds of people in attendance to watch the city take the unprecedented step of returning 200 acres of land stolen generations ago to the Wiyot Tribe.

The vote, which was years in the making and captured international headlines, paved the way for, about 90 minutes later, Eureka Mayor Susan Seaman and Wiyot Tribal Chair Ted Hernandez signing a deed of trust, formally transferring ownership of the largest island in Humboldt Bay. It is also the first time in the history of our nation that a local municipality has voluntarily given back Native land absent an accompanying sale, lawsuit or court order. 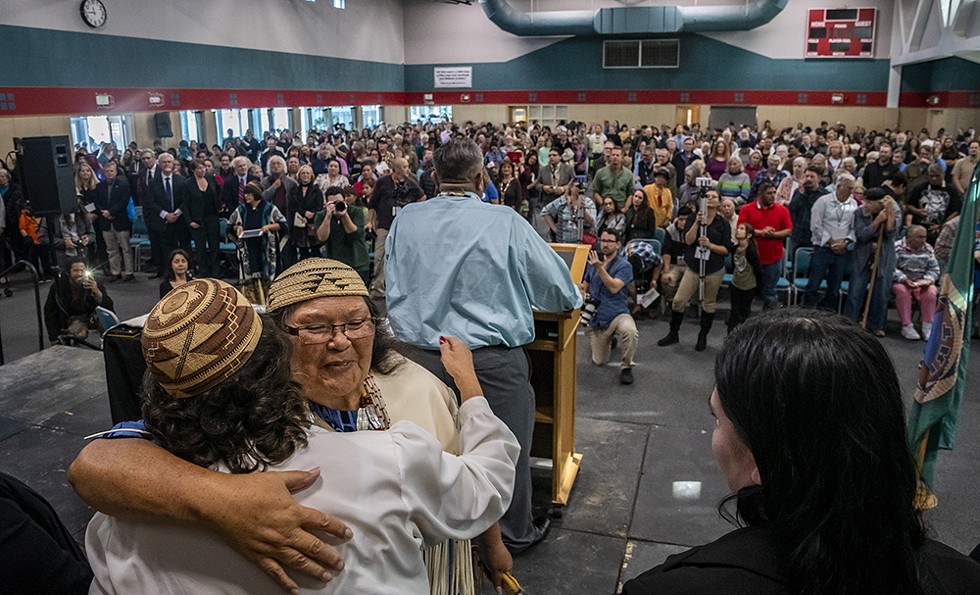 The gravity of the moment was not lost on the crowd, which was filled with generations of local residents, Native and non-Native alike. Some brought their children, others their elders, to witness the historic vote, which left many wiping tears from their eyes. And after the vote, the gathering switched seamlessly from an official meeting of the Eureka City Council to a ceremony and celebration of the Wiyot Tribe.

"Oh my goodness," Cutcha Risling Baldy, who chairs Humboldt State University's Native American Studies Department and is of Hupa, Yurok and Karuk descent, said after walking to the podium and surveying the crowd.

"We knew that this day would come," she continued, adding that while Duluwat Island is perhaps most widely known for its worst day — that night in 1860, when a group of white men descended on the island while the Wiyot Tribe was in the midst of its World Renewal Ceremony and murdered as many as 250 people — she always saw the island as symbolic of so much more. "It wasn't about what had happened there but what would happen there. ... I know that our ancestors knew that one day this day would come."


“It wasn’t about what had happened there but what would happen there. … I know that our ancestors knew that one day this day would come.” tweet this
The largest of three islands in Humboldt Bay, Duluwat Island, which for decades has been largely known locally as "Indian Island," is comprised mainly of tidelands and is 280 acres, stretching nearly a mile long and a half-mile wide. Up until the mid-1800s, it was home to two Wiyot villages, Etpidohl and Tuluwat, which served as the site of the tribe's World Renewal Ceremony, drawing tribal members from throughout the region to dance in an effort to heal the world and bring balance to all things.

After taking ownership of a portion of the island, the tribe secured various grants and oversaw a massive environmental cleanup, scrubbing the land of the toxic legacies left by a lumber mill and boat repair facility that operated there for decades. In 2014, with the island clean and returned to environmental health, the tribe completed the World Renewal Ceremony that had been cut short in 1860. Around the same time, the current effort to see Eureka return the other 202 acres under its ownership was quietly gaining a foothold.

In March of that year, then Mayor Frank Jager — the grandfather of two Wiyot girls — attempted to help heal old wounds by drafting a letter of apology to the tribe on behalf of the city.

"In February 1860, 154 years ago, citizens from Eureka participated in what has been described as a massacre of unfathomable proportions," the letter began, going on to describe the attack on "that winter night long ago," when women and children were slaughtered. "As Mayor of Eureka, and on behalf of the city council and the people of Eureka, we would like to offer a formal apology to the Wiyot people for the actions of our people in 1860. Nothing we say or do can make up for what occurred on that night of infamy. It will forever be a scar on our history. We can, however, with our present and future actions of support for the Wiyot work to remove the prejudice and bigotry that still exist in our society today." 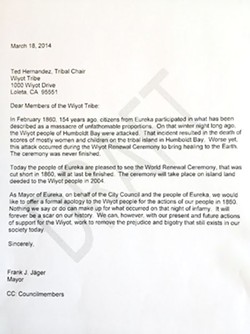 The letter was released to the public before undergoing a legal review by then City Attorney Cyndy Day-Wilson, who erroneously thought the letter could open the city up to potential financial liability and gutted the apology, removing any mention of who attacked the Wiyot people that day or anyone being sorry for it. (Multiple legal experts consulted by the Journal say Day-Wilson's concerns were unfounded, as the brutal killings carried out by unknown people occurred 14 years before Eureka was officially incorporated as a city.)

But the letter — and Jager's sentiments — opened the door to something bigger. A few months later, Natalie Arroyo and Kim Bergel won seats on the Eureka City Council. For different reasons, both had making amends with the Wiyot Tribe at the forefront of their minds. Both asked the tribe what they could do as new council members to help the tribe and improve relations. The answer was consistent: "Give us back the island."

After years of work behind the scenes, the council voted unanimously Dec. 4, 2018, to declare the island "surplus property" and directed City Manager Greg Sparks to negotiate its return to the tribe. It has taken a year — bogged down by issues with the State Lands Commission and the title company overseeing the transfer — but the island has now been returned to the tribe without condition.

"It's the right thing to do and that's why we're doing it," said Bergel. "Certainly, it's been far too long."

Arroyo, who was in Georgia serving on active duty orders with the U.S. Coast Guard and unable to attend the ceremony, wrote in a letter that Sparks read for her that repatriating the island was simply the right thing to do.

"I will be so bold as to say that, while under current conditions Eureka owns the land on Tuluwat, it was truly never ours," Arroyo wrote. "It is sacred, stolen land, and I firmly believe it is our moral obligation to return it. All pretty words aside, that is what the situation is in a nutshell."

Baldy said she's hopeful this is an idea that catches on, noting that when she speaks at various engagements she is often asked by well-meaning white people what they can do.

"I have one answer now: You need to give all the land back," she said. "The least that anyone can do is return the land and now we know it's possible. We've seen it. We've felt it."

“I have one answer now: You need to give all the land back. The least that anyone can do is return the land and now we know it’s possible. We’ve seen it. We’ve felt it.” tweet this

Experts consulted by the Journal say the transfer is simply without precedent —  aside from the city's turning over the 40 acres of the island back in 2004 but, they note, that came after the tribe purchased a piece of the property on the open market. Nonprofits and the federal government have returned land to Native people, but nobody consulted by the Journal could recall a local municipality repatriating hundreds of acres of land to a local tribe in the absence of a sale or lawsuit settlement.

"I think it's a big deal," said Bob Anderson, the director of the Native American Law Center at the University of Washington School of Law, who for six years served in the Interior Department providing legal advice on issues of Indian law and sovereignty. "It sets an important precedent for other communities that might be thinking about doing this."

In a powerful moment, Jager came to the stage and read the unedited version of his apology, but only after calling on his successors on the council to take one more step: to make Feb. 26 an official day of mourning in the city during which flags would fly at half staff in memory of the Wiyot people murdered in 1860. 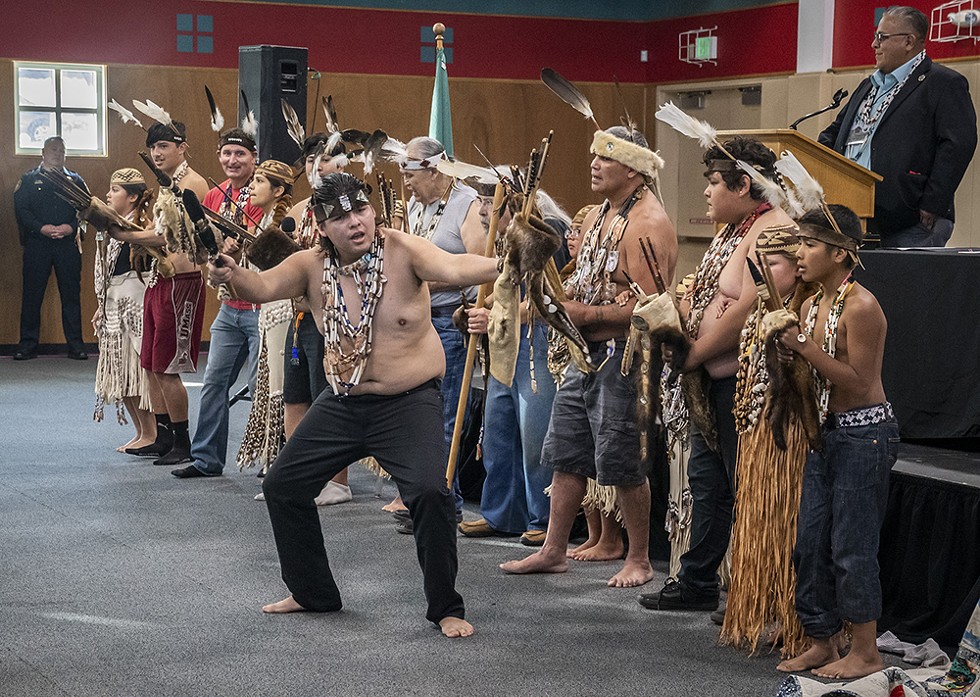 At one point in the ceremony, Hernandez called about two dozen Wiyot people to the front of the stage to perform the tribe's Brush Dance, a dance of healing. One of the dancers — who ranged from kids to elders, all clad in tribal regalia — broke out in song and the others began bobbing with the rhythm, the beads and shells in their regalia creating a chorus. Moved by the moment, Hernandez descended from the stage and joined in the dance.


Before the dance, Seidner, who said she's envisioned the return of the island since her grandmother told her about its history when she was 5, believing it would one day happen but questioning whether she'd live to see it, set out one chair on either side of the stage. She left one empty, a symbol of the tribal members killed that night 159 years ago, and draped a quilt donated to the tribe during its original fundraising efforts over the other.

Moments before signing the deed that would officially return the center of the Wiyot people's universe to the tribe, Hernandez made clear that while it was a historic day, it's not an ending but a continuation for the people who have been here for millennia. Flanked on one side by members of the Wiyot Tribal Council, the Eureka City Council seated on the other, Hernandez brought the ceremony to a close.

“We don’t stop here. We move forward. And the next part is the healing of our rivers.” tweet this

"We're surrounded by strong people, behind us and in front of us," he said. "Today is a very historic event. I want to thank everybody again for joining us, especially the children. Today ... you're witnessing history. Today is your day to move forward with our traditions and our cultures. We don't stop here. We move forward. And the next part is the healing of our rivers."

The crowd broke into applause. Hernandez paused, then flashed a smile.

"Without further ado," he continued, "I think we've been waiting too long. I think it's time to sign." 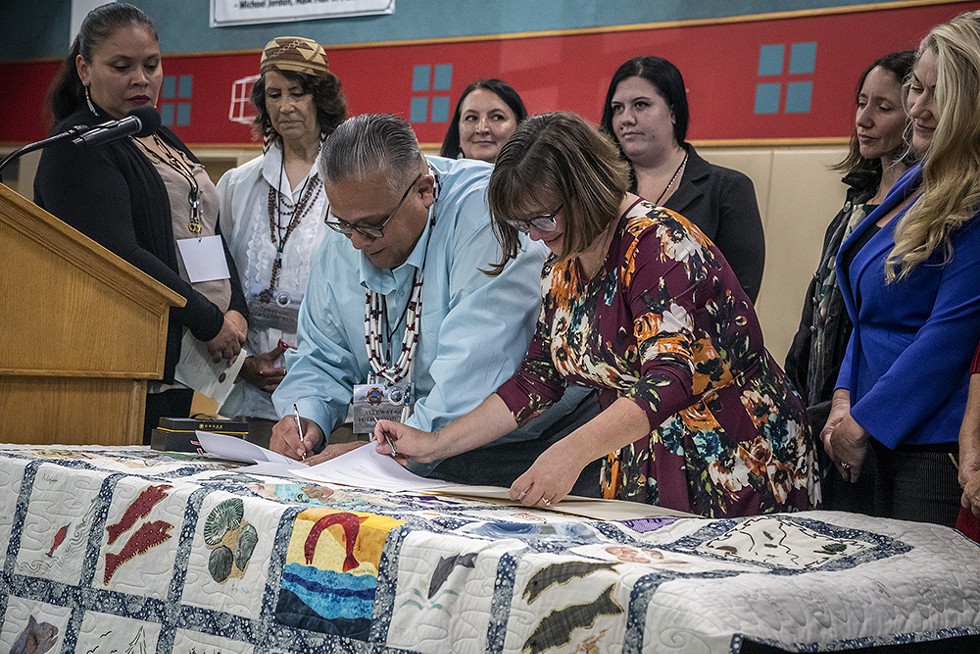 With that, Seaman and Hernandez signed the deed and Duluwat Island was returned to the Wiyot Tribe, bringing some semblance of balance back to the universe.

Thadeus Greenson is the Journal’s news editor. He prefers he/him pronouns and can be reached at 442-1400, extension 321, or thad@northcoastjournal.com. Follow him on Twitter @thadeusgreenson. Related story: "The Return of Indian Island," July 1, 2004.