The Joys of Bocce

Easy to learn and intrinsically social, the game is on a roll 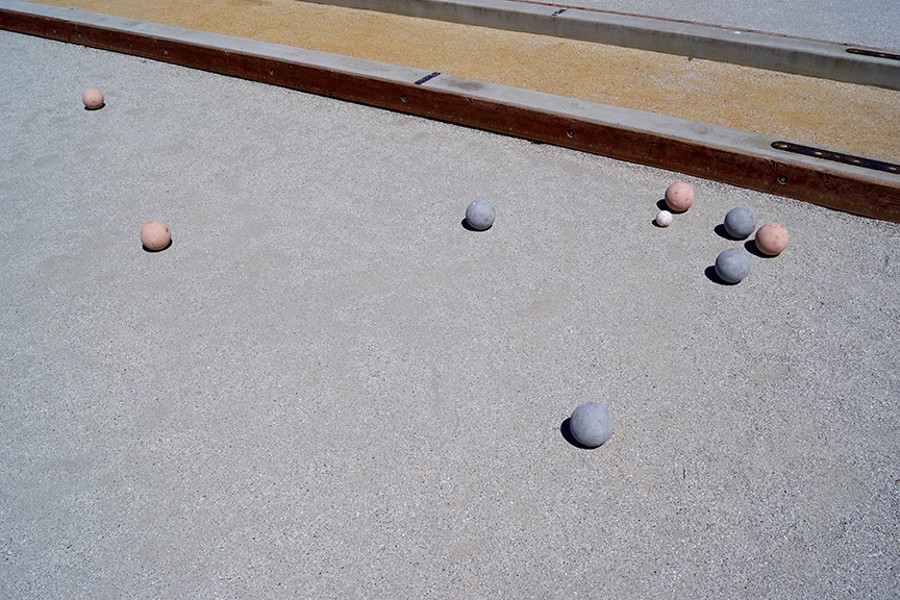 I got the ball rolling by just showing up at the Larson Park Bocce Ball courts in Arcata one Saturday morning. Intending only to watch, I was surprised when John, Dave and Rochelle invited me to join them. As I soon learned, playing with four is much preferred to any other combination, even if the fourth is a total novice.

"Anybody can play," was among the first things that Dave said to me about bocce ball. "You can be a young kid or 93 years old and barely able to walk from the car." Dave put himself in the latter category (although he's not 93). The rules are simple, the game requires minimal equipment, and physical strength and agility are almost immaterial.

Fundamentally, bocce ball involves rolling grapefruit-sized balls — typically made of wood, metal or high-density plastic — as close to a target as possible. In the constellation of games, they don't get much simpler than that. Egyptians were playing a similar game with polished rocks as early as 5000 BC, according to the Collegium Cosmicum ad Buxeas, which bills itself as "the preeminent international organization for the sport of bocce." Later, coconuts were used and eventually carved wooden balls. The game evolved under the influence of the Greeks and later the Romans, eventually spreading throughout Europe.

The version first played in America was an English variation called bowis, from the French boule, meaning ball. Contemporary variations include pétanque in France and lawn bowling, or simply bowls, in England. But what once may have been the province of immigrants has been embraced by Americans from all walks of life. So it seemed that sunny Saturday morning.

The courts, which were added to Larson Park in 2011 and offer equipment and lanes to rent, filled quickly. Specialized brushes and heavy rollers were used to groom the long lanes of finely crushed shell. Much-loved canvas and leather bags were unzipped and the colored bocci (or balls) were placed on the courts. Tape measures lay on the side rails near the center, and chairs were arranged around the perimeter. Steady laughter and conversation revealed the importance of the game's social aspect. When I asked my long-time friend and bocce ball enthusiast Johnny how he would characterize the game he said simply, "friendly."

Play begins when a small white ball (known as a pallino, boccino or jack) is tossed toward the far end of the 90-foot court. If four people are playing, they split into two teams with a player from each team standing at either end of the court. The team that threw the pallino bowls first, trying to roll a ball as close to it as possible. Then the other team tries to roll one of its own bocci even closer.

From there, the team that does not have the ball closest to the pallino keeps rolling until it does manage to get one closer, and so on until both teams are out of balls. That marks the end of one round. Only the team with the ball nearest the pallino can score, and that team gets a point for each ball that's closer to the pallino than its opponent's closest ball. There are some additional rules, but within five minutes even a raw rookie can fully understand play. We played to 12 points but that varies.

Players throw with an underarm motion, and I saw as many subtle variations as there were people present — crouching to release the bocce smoothly; spinning; banking off the wooden bumpers. And in my case, praying. Most good players, I was told, are straight bowlers. But I found rolling a straight ball easier said than done.

I quickly came to understand the complexity of the strategy involved, and once again I appreciated the difference between understanding the tactics and actually executing them. Some of the players exhibited real finesse. Most of us depended on luck. In fact, Johnny's bocce mantra appears to be, "It's better to be lucky than good." Thank goodness. That gave me hope.

Not surprisingly, there are a number of variations on the game and many layers of understanding. The official sport has its own language with terms like casino, giro, punto, raffa, volo and morra. Those less beholden to convention can purchase lighted balls that let you play at night or abandon the more predictable surface of bocce courts for the unfettered world of beaches or lawns.

For purists (or at least those of us interested in limiting the variables that impact our game) courts abound in Humboldt County. You'll find them in Trinidad, Rio Dell, Ferndale, Blue Lake and many places in between. There is generally a game at the McKinleyville courts Saturday mornings and in Cutten Saturday afternoons. There seem to be frequent tournaments, too, such as the recent Richard Bettis Memorial Scholarship Fund Bocce Tournament in Rio Dell and the Italian Festival tourney sponsored by the Eureka Order of the Sons of Italy.

Since much of the bocce community depends upon the energy of volunteers — whether it's to groom and monitor the courts or organize tournaments and leagues (there are none currently) — there's often relatively short notice about special events. Visit one of the courts and ask around.

At the conclusion of my first bocce experience, I came home charmed by the culture of the game. Somewhere I heard that the game is so much about friendship and conviviality that bocce even means "kiss" in Italian — a falsehood I repeated several times before being gently corrected. Bocce, I found out, actually means "bowls." Baci means "kiss," which explains why it's the term used when a ball nestles up and touches the pallino.

If you would like to write a Get Out! Column, please email Journal editor Carrie Peyton Dahlberg at carrie@northcoastjournal.com