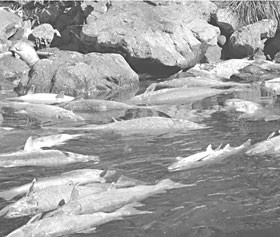 This summer is already proving to be another difficult one in the Klamath Basin, both on and off the river. The U.S. Environmental Protection Agency recently issued a warning about dangerously high levels of toxic algae blooming on the Klamath River in Iron Gate and Copco reservoirs. And the Klamath Fish Health Assessment Team — made up of biologists with state and federal agencies and Native American tribes, among others — have increased the fish die-off readiness level from green to yellow, meaning that the fall Chinook and coho runs could be in danger this year.

Meanwhile on land, 28 disparate stakeholders including the states of California and Oregon, U.S. water and wildlife agencies, fishermen, Native American tribes, farmers and environmental groups have been negotiating a settlement behind closed doors for over two years about how to share water in the Klamath Basin, and what to do about PacifiCorp’s hydropower dams there. As their negotiations proceed, the Federal Energy Regulatory Commission is working in parallel to complete its final environmental impact statement, which will determine whether or not to relicense PacifCorp’s Klamath dams. The group of stakeholders is trying to balance the protection of imperiled fish species — including salmon, two types of sucker fish and the bull trout — along with national wildlife refuges and the interests of farmers who depend on river water for their livelihood. The task doesn’t just sound Sisyphean. It is.

“If it were easy, it wouldn’t be hard,” said Greg Addington, executive director of the Klamath Water Users Association, which represents irrigation districts in the upper basin.

Unfortunately for the stakeholders, things don’t look like they’re going to get easier any time soon. Two out of the 28 groups are no longer at the table — Oregon-based non-profits Oregon Wild and WaterWatch of Oregon, which were pushing for the complete phasing out of commercial farming on the Tule Lake and Lower Klamath national wildlife refuges. These groups came to loggerheads with other stakeholders, and, according to representatives, ended up being excluded from negotiations, which have moved forward without them.

“It’s because they weren’t looking for a solution ... Their agenda is to have agriculture out of the upper basin,” said Addington.

Steve Pedery, conservation director of Oregon Wild, sees it differently. In a July 5 op-ed in the Eugene Register-Guard, he wrote that the Bush administration and its agribusiness allies “hijacked closed-door talks over the removal of four Klamath River dams, demanding that conservation groups, tribes and fishermen support permanent commercial agricultural development on the Klamath’s spectacular national wildlife.”

Reached by telephone while on a canoe trip on the Williamson River, which flows into Upper Klamath Lake, Pedery explained that last summer he thought things were “fairly positive” as a result of “traction” gained in the talks. But then the federal government put a “settlement framework” on the table, which stipulated “permanent refuges for agribusiness” in exchange for dam removal. That’s when Oregon Wild was told “to sign or else.” When they and WaterWatch refused to do so, they say, the negotiating committee was simply dissolved and subsequently reorganized without them.

“Compromise isn’t ‘Four groups get in a room, two make a deal and force it on the others,’” Pedery said about his experience at the negotiations after the framework was introduced. Nonetheless, he said Oregon Wild continues to be involved in the process through sister groups and allies in the tribes.

Bob Hunter, a staff attorney at WaterWatch, is worried that without his group and Oregon Wild at the talks, a resolution will be far from ideal. “Our concern is that without us at the table, we could end up with a deal where people might be touting that they solved problems in the basin while keeping the same level of demand [for water] that has been driving the basin into crisis from year to year,” he said. But he was optimistic that WaterWatch will eventually be allowed back in.

Craig Tucker, spokesman for the Karuk tribe, said the framework, which Pedery claims was foisted onto the stakeholders from above by the shadowy powers that be, was in fact the result of arduous negotiating among the disparate groups. “We achieved working out a framework that specified dam removal,” Tucker said. “Everybody felt it was good for the river except for Oregon Wild ... We didn’t want to stop making progress because of what we perceived as Oregon Wild’s ideological concerns.”

Furthermore, Tucker downplays the group’s importance to continuing negotiations, calling them a “relatively small group” out of touch with basin residents. Nor does Tucker buy Oregon Wild’s conspiracy theory. The negotiation committee has “not been hijacked by the Bush administration. It has been hijacked by the people who live here,” he said.

However, in light of recent allegations by the Washington Post that Vice President Dick Cheney reached down from the Olympian heights of the White House to force his hand in the Klamath Basin in 2001, Pedery’s concerns are not without precedent. The four-part report alleges that in an effort to get former Republican congressman Robert F. Smith of Oregon reelected (at the time, Smith was representing farmers in the Klamath basin fearful their crops would go unwatered for the sake of saving salmon), Cheney called into question studies conducted by the federal government’s own scientists which “concluded unequivocally” that diverting water for irrigation would harm two federally protected species of fish, violating the Endangered Species Act of 1973. After the National Academy of Sciences had “scrutinized” the work of federal biologists — at the vice president’s behest — they found that diverting water for irrigation into the Klamath Basin wouldn’t be that disastrous after all. (In 2002, the science academy’s decision to divert water to farmers resulted in the largest fish kill in U.S. history.)

The lead biologist for the National Marine Fisheries Service team, Michael Kelly, critiqued the science academy’s report in a draft opinion, but his comments were edited out by his superiors. Later, in a whistleblower claim, Kelly, who has since quit the federal agency, said that it was clear to him that “someone at a higher level” had ordered his agency to endorse the proposal regardless of its consequences to the fish.

WaterWatch’s Hunter said that allegations of Cheney’s involvement in the Klamath basin raise important questions: “Is that influence [Cheney’s] still there?” he asked. “Is it still being exerted on the talks?”

Tucker, on the other hand, said that the Washington Post series was a distraction, at least to the people on the ground. “The news isn’t what some politician did four or five years ago, it’s what we’re doing today,” he said. And he added that there’s good news that needs reporting: “By year’s end, we’re gonna have a negotiated agreement with PacifiCorp or with everyone except PacifiCorp, and FERC will issue a mandate,” he said.

In a process like the Klamath River negotiation settlement talks, difficulties are to be expected, said Greg King, director of the Northcoast Environmental Center in Arcata. “There are a lot of salvos and inaccuracies being lobbed which one might expect given the disparate collection of groups and individuals in the room,” King said. But what’s “amazing,” according to King, is that “the disparate groups and individuals are still in the room three years later.” That is, everyone except for Oregon Wild and WaterWatch. But for those stakeholders left at the table, like Craig Tucker with the Karuk tribe, it’s clear there’s no way to reach an eventual settlement without making tough compromises.

“At the end of the day,” Tucker said, “we want to see a salmon and potato festival in the Klamath Basin Valley.”