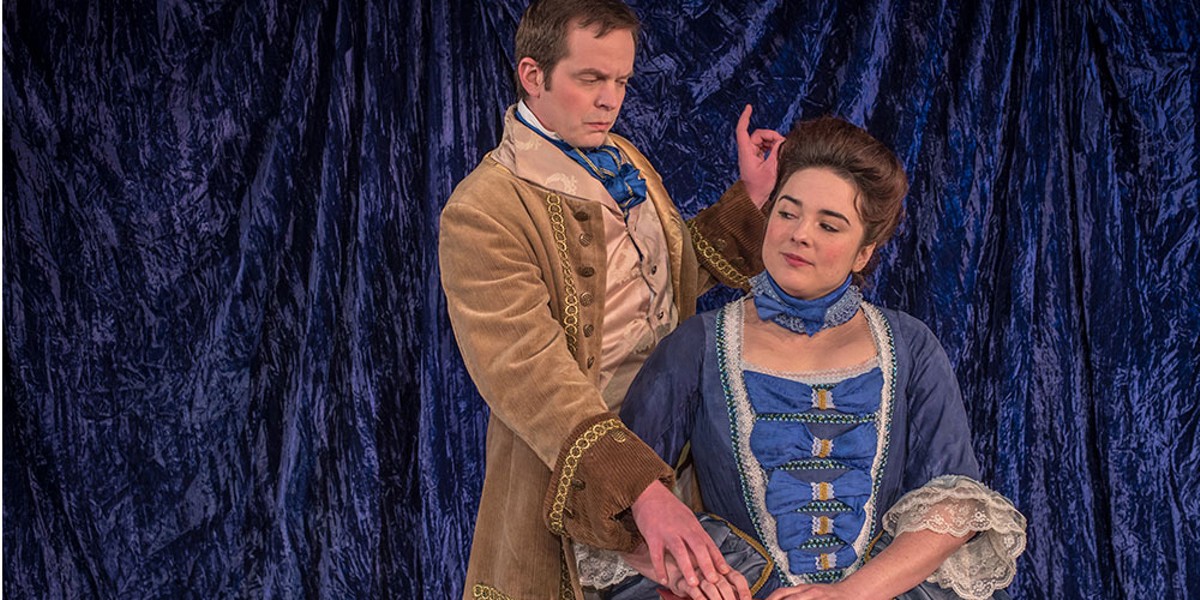 Emilie du Châtelet is an all but forgotten figure whose contributions to scientific knowledge brought together physics, philosophy and gender in a challenge that continues to resonate today. She met an untimely death in 1749 as a result of an accidental pregnancy before she was able to resolve the two most important questions she had in life: "Was I right?" and "Was I loved?"

In Emilie: La Marquise du Châtelet Defends Her Life Tonight, now playing at Redwood Curtain Theatre, playwright Lauren Gunderson gives Emilie (Alexandra Blouin) another opportunity to find the answers by bringing her back from the dead. However, in Gunderson's hands, this seemingly simple construct becomes a new law of physics (or metaphysics) — each time Emilie touches someone from her past as she relives an episode with that person, an electrical short causes everything to go dark.

We are told that "touching breaks the dreamworld" and so, whenever a touch takes place, Emilie becomes the narrator of her life and her stage persona is replaced by a different female character, Soubrette (Julia Hjerpe). In naming the character Soubrette (a word defined by Merriam-Webster as "a coquettish maid or frivolous young woman in comedies," or "an actress who plays such a part," however, Gunderson falls prey to overly clever plays on words that add nothing to the piece.

This unnecessary nonsense aside, the core of the play delivers a solid and engaging portrait of the quest for knowledge and the extreme difficulties faced by women attempting to make a name for themselves in the Age of Enlightenment. Emilie, headstrong woman that she is, does not make life any easier for herself by partnering, both academically and sexually, with Voltaire (Charlie Heinberg) and by challenging Sir Isaac Newton's widely accepted second theory of motion: Force = mass times velocity. Emilie insisted that the velocity should be squared for the equation to make sense, a conclusion that Voltaire does not share. And thus arise those two critical and unanswered questions.

While we might wonder whether the question of love also applies to her husband (unlikely) and the soldier-poet who unwittingly brings about her death by initiating that accidental pregnancy (possibly), Emilie might perhaps take comfort that her beloved superscripted 2 finally takes center stage in Einstein's e=mc2. But then, in her own words, "does either one really matter in the end?"

Blouin, last seen on the North Coast stage as Magenta in The Rocky Horror Show, dominates the stage with a strong and confident performance that deftly balances the underlying insecurity of a woman in a man's world with the confidence of a skilled physicist and mathematician. Her verbal sparring skills are more than matched by Heinberg, as he shifts seamlessly between lover and scientist, drama queen and logician. As Soubrette, Hjerpe, who last year shared the stage with Blouin in Ferndale Rep's Boeing Boeing, largely succeeds in providing an extra layer of insight into Emilie's character.

Familiar to local audiences in his eponymous Bat Boy and Rocky Horror roles, Joey Lawrence here takes on multiple characters, including the soldier-poet, the Marquis du Châtelet and Sir Isaac Newton as what the play's cast list describes simply as "Gentleman." Unfortunately, Gunderson hasn't developed any of these characters enough for the actor to give them any real depth. The same problem applies to the generic "Madam" role (which includes Emilie's mother), portrayed with appropriate 18th-century courtly hauteur by Ruthi Engelke. With greater definition, these characters would be better positioned to round out important aspects of Emilie's life; instead, they feel more like an afterthought by a playwright who's overly focused on her leading character's obsessions.

Lynnie Horrigan's costumes are, as always, an absolute delight, creating a richly layered picture of life among the French aristocracy. Jared Sorenson's set design is masterful in its simplicity, giving Emilie a literal drawing board on which to present her ideas, her arguments and her internal conflicts between love and science, heart and mind. Kristin Mack's sound design is effective once we understand its role in the play's construct.

That said, Catherine L. Brown does largely rise to the challenge set by the playwright. The story moves along at a good pace and incorporates a creative approach to keeping the audience engaged with the story through the intermission. The interplay between Emilie and Voltaire is particularly successful in bringing to life two strong, and strong-willed, personalities.

Emilie is a clever and well-written script, with whip-smart dialogue that provoked much laughter from the audience at the preview performance I attended. Gunderson is clearly a talented playwright but the play betrays at times a preciousness and an underdeveloped sense of character that make one wonder how much more rounded it might be if she were to apply her own device to her life and revisit the piece with the hindsight of greater maturity.

Dell'Arte International's Adaptations returns to the Carlo Theatre from Feb. 16-19 at 8 p.m. with short original plays that second-year MFA students have adapted from fiction, nonfiction and poems. Call 668-5663 or visit www.dellarte.com.