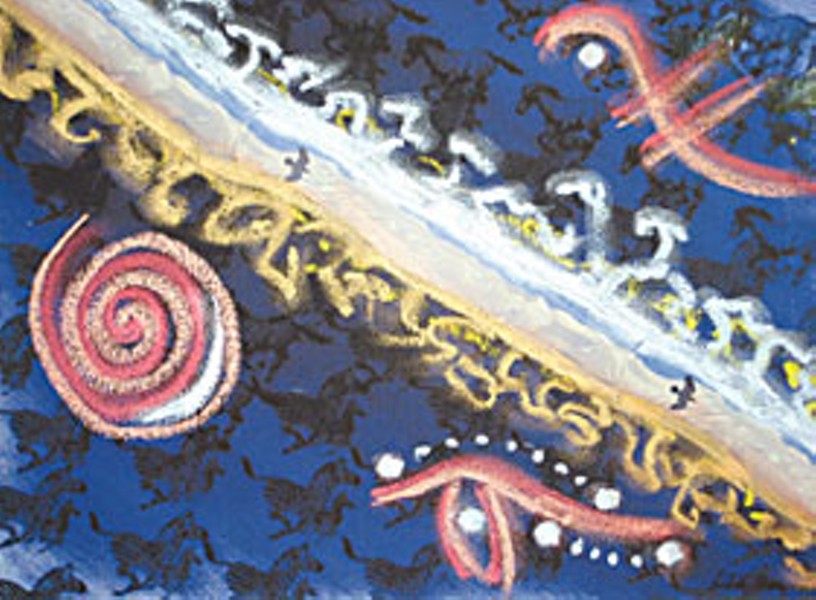 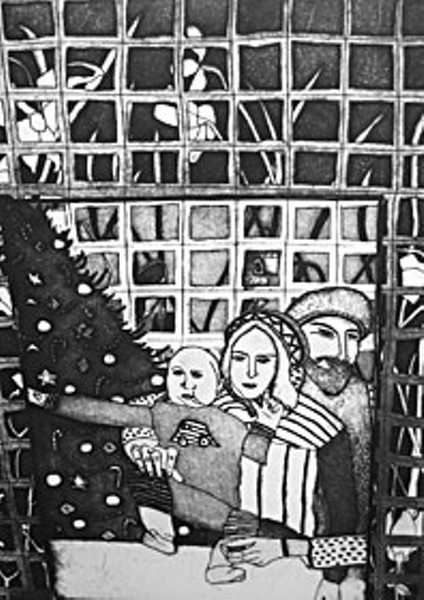 “My goal is to make my etchings colorful using only black and white.” I never knew Brenda Tuxford, the woman who said that about her art. I knew of her, but by the time I arrived she was already working primarily behind the scenes, so I didn’t get a chance to meet her before her untimely death. I’m pretty sure I would have liked her. It sounds like everyone who knew her did. But I’m not going to try to describe someone I don’t know. Instead I’ll just focus on her artwork.

I’m intrigued with the artist’s goal of making colorful images using only black and white. She does this with the depth of her perception and involvement with the story she’s telling. “Since my art, family and friends are totally integrated, my obvious love of my subjects make my art very romantic,” she writes in an artist’s statement from a previous show. Romantic? Well, not the Hollywood version. It’s romance with a definite quirkiness and a strong sense of humor. Proportions and perspective are all subject to interpretation in her work. Accurate representation of detail is not the point. What she did do, very successfully, was to show the world through her eyes.

Some artists concentrate on capturing the essence of the scene in front of them, but Tuxford’s strength was to show the rest of us what the ordinary world looked like from her own perspective. Her spirit and personality come through in her work, almost more than the subject matter.

She was primarily a print artist, but she got involved with other media later in life, as the toxicity of the printmaking process started to wear on her. Book arts were a passion in her later years, and she collaborated with best-selling children’s author Natasha Wing to illustrate a hand-made book. Fiona’s Tea Party uses the setting of Ferndale’s Gingerbread Mansion, and Tuxford’s energetic lines and rich decoration work well to illustrate a familiar place and the fiery Fiona.

Wing says she was attracted to Tuxford’s “odd and skewed vision of people,” as well as her playfulness. Of her collaboration with the printmaker, Wing says, “it was just like a couple of kids getting together and doing a project.” The last copy of this local treasure, framed pages from the book and other recently discovered works of Tuxford’s will be on exhibit and available for purchase during the months of August and September at A.G. Edwards in Eureka.

The exhibit also includes the work of her longtime business partner, Libby Maynard. It was these two women who gave birth to the Ink People back in the late ’70s. They met as students at Humboldt State University. Tuxford was just finishing up her MA and was faced with the prospect of no longer having access to the college’s resources. How could she continue her printing habit? In order to fill this void in the community and have access to a press herself, she and Libby founded the Ink People, which made a printing press available to all. The Ink People is still a resource to the community, and not only for printers.

Maynard and Tuxford were very close friends and they made an especially good team. “As a working partnership,” says Maynard, “we had very different kinds of skill sets and personalities.” They complemented each other, and sometimes clashed with each other, and the same is true for their art. While Tuxford’s style was broad, outgoing and narrational, Libby’s work is introspective, highly symbolic and often times inscrutable. “My work doesn’t sell well,” she admits. “People either love it or they hate it.” It’s the classic example of art work that makes people say, “But what does it mean?”

If you want to see a story, you’ll go for Tuxford’s work, but if you can live with the esoteric, the rich colors and intriguing marks of Libby’s work are certainly beautiful. And Maynard is okay with it if you don’t grok her work. She believes that art works in mysterious ways, and it is not of supreme importance for everyone to understand it. I don’t think she has a problem with art that people get, but art that’s over our heads is still art in her book. It has an energy of its own and works its magic regardless of human understanding. It is her gift to the world.

“The Last Brenda & Libby Show” will be on exhibit at A.G. Edwards, 318 5th Street, in Eureka from Aug. 4 through Oct. 4. The net proceeds from the sales of Brenda Tuxford’s artwork will be donated to the Brenda Tuxford Memorial Fund of The Ink People Center for the Arts, as will 10 percent of Libby Maynard’s sales.