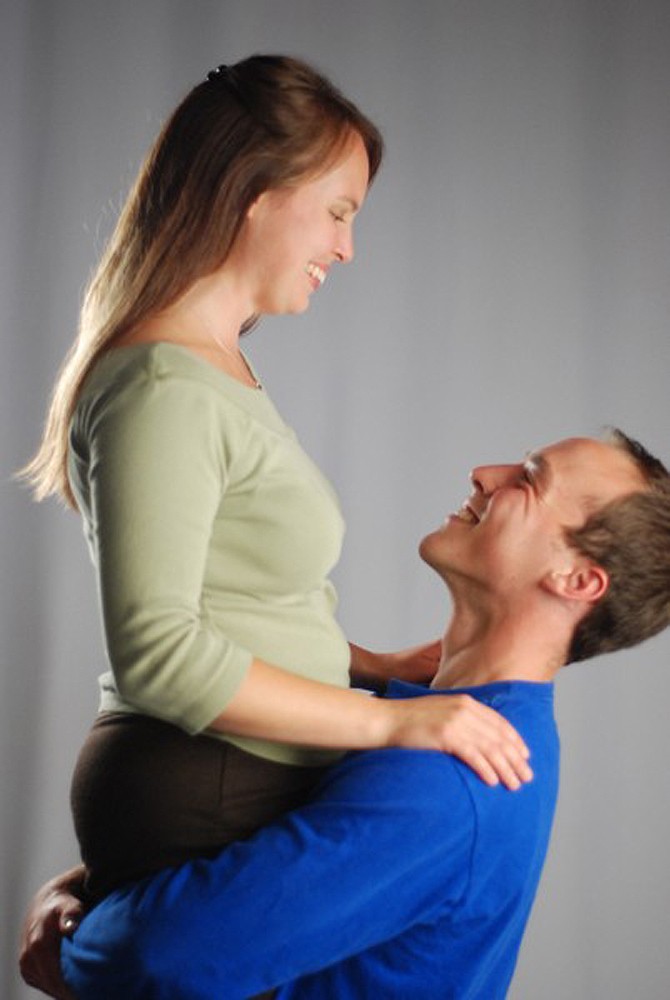 The Last Five Years, now on stage at Redwood Curtain in Eureka, is the fifth musical produced on the North Coast since August, and the 11th since last September (if you count the two Mozart operas along with the three Sondheims and the two Lerner and Loewes). It's even the second time in that period for The Last Five Years, which Humboldt Light Opera performed in April.

Written and composed by Jason Robert Brown, this show is almost entirely sung. There are only two characters: Jamie, a young novelist on the rise in Manhattan, and Catherine, a struggling actress. The story is about their relationship as a couple. However, they are together on stage for just one scene. The rest of the time each sings alone.

On the level of the music and the performances, this is an enjoyable show. Ably supported by the band of Justin Ross, Amber Grimes and Pete Zuleger, the music is pop-oriented in various styles, with literate lyrics. There's a definite imbalance: Jamie gets the big numbers and Cathy gets a lot of slow songs that are bittersweet at best. At times it's like Billy Joel versus Alanis Morisette (two songwriters from Brown's formative years). But Nanette Voss-Herlihy is heroic in finding and expressing Cathy's essence, and Kyle Ryan is confidently dazzling as Jamie, both as a singer and an actor. His every moment felt true. Out of his many recent appearances on various local stages, this is Ryan's most complete performance.

But regarding the story, if (like me) you haven't seen this show before, I have some information you will probably find useful: Jamie's story is told from the beginning to the end of the relationship, but Cathy's story is sung from the end to the beginning. I learned this later from Wikipedia. I certainly didn't learn it from seeing the show (or even from the enigmatic program note).

Starting at the end of a relationship and going back to the beginning has worked on the stage, notably in Harold Pinter's Betrayal. Deconstructing a relationship from each person's perspective, going in different directions in time, is a provocative postmodern idea, and it could even work if the procedure was made clear to the audience. Playing with relative time has its moments, but you shouldn't have to be Einstein to figure out what's going on. There is so much ambiguity in this text, helped not at all by the staging, that much of its emotion and possible meaning are lost.

Apart from the universals of relationship, this story about the perils of success (first produced in 2002) has an almost nostalgic, 1990s Bright Lights, Big City, Masters of the Universe feel. However, the problems of two-career couples in the arts are particular and perennial.

The Last Five Years is directed by Dianne Zuleger, with scenic and lighting design by Michael Burkhart, and costumes by Kevin Sharkey. It is on stage at Redwood Curtain Thursdays through Saturdays at 8 p.m. through Nov. 17, with a 2 p.m. matinee on Nov. 13.

So what about this run of musicals since summer? Qualitatively, I'd suggest Mary Jane: The Musical as the most relevant, Dirty Rotten Scoundrels as the most fun, Into the Woods as the most family-friendly. Sweeney Todd was the best play and Brigadoon had the best music. Generally speaking, North Coast companies do musicals well, and this run kept people busy but stretched the talent base thin, not to mention the audience. It also suggests that communication among these institutions could still be a lot better.

At the Arcata Playhouse, Bay Area actor and Celtic harpist Patrick Ball performs his theatrical tribute to legendary Irish musician Turlough O'Carolan in O'Carolan's Farewell to Music -- one night only on Friday, Nov. 4 at 7 p.m.

At the Redbud Theatre at Camp Kimtu in Willow Creek, the comedy Academia Nuts by Gregg Kreutz is performed Nov. 4, 5, 11 and 12 at 8 p.m. The cast for the farce/mystery includes Roland Grubb, Libby Pinto, Vicki Kurtz and Brian Bottemiller (who also directs).