The Laws of the (Schoolyard) Jungle 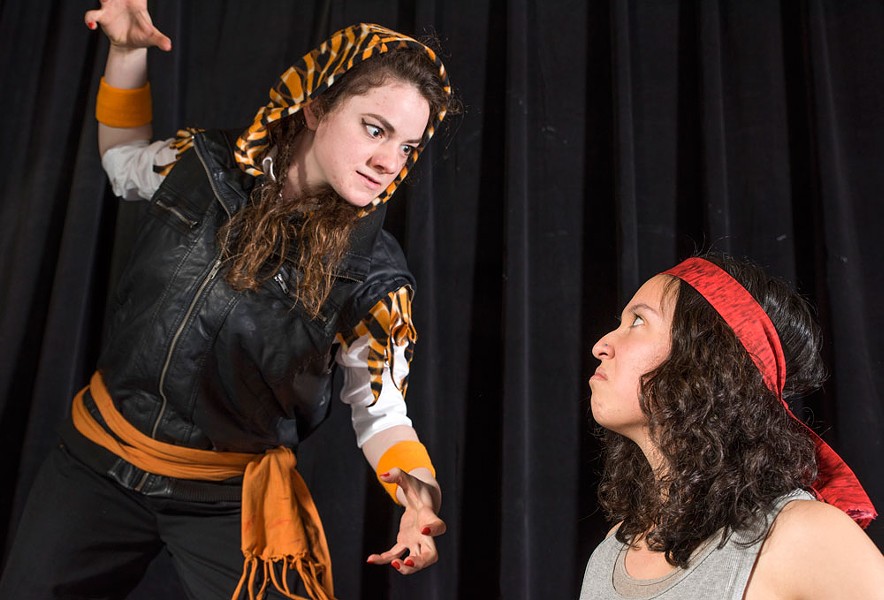 Rudyard Kipling wrote the original Jungle Book stories in the 1890s while living in Vermont, but the root of the stories lies in colonial India, where he spent time as a child and young adult. There, stories abound of children snatched from villages by wolves, a very few of whom returned as children crawling on all fours, fearful of humans and unable to speak. Kipling's fables are in many ways typical Victorian moral tales, but overlaid with the rigid class-and-caste structure of the Raj and a liberal dose of English boarding school bullying – factors which live on in today's polarized society.

The stories in The Jungle Book have been widely retold in film (a new version hits the big screen in April) and theater, and it is this most widely performed adaptation, Jungalbook, that Humboldt State University students have brought to the stage of the Van Duzer Theatre. Written in 1984 by Edward Mast, Jungalbook takes the central tenets of the original stories and transports them to an urban playground where fourth- and fifth-graders are challenged to explore the laws of the jungle and reflect on the nature of their own interpersonal relationships, just as Kipling asked Victorian-era children to do.

The core story arc will be familiar to anyone who's read the books or seen the Disney movie: Wolf discovers human baby and accepts bear's challenge to adopt rather than eat it; man-cub makes journey of self-discovery, guided publicly by the wolf and secretly by the panther; wolf dies; man-cub seeks out humans, finds and frees captive elephant; tiger attempts to kill man-cub; man-cub outwits tiger using human tools as well as jungle smarts and must now leave the jungle.

The HSU production, directed by Theatre, Film & Dance Professor Troy Lescher, departs from Mast's original script by switching the gender of two central characters. Camille Borrowdale believably portrays Mowgli the man-cub as a high-energy, acrobatic girl searching for her true identity in a compelling and engaging performance. The main protagonist, Sherekhan the Bengal Tiger, for whom "all ground is hunting ground" is also cast as female, but rather less successfully; while it's clear that Jenna Donahue is channeling the schoolyard bully-bitch, she seems to be wearing the role more than fully inhabiting it.

Standouts among the rest of the cast are Bryan Kashon as a deliciously campy Bagheera the panther, Josh Banuelos as a hysterically funny Dracula-esque Chil the kite, Rilo DeAnn as the menacing yet ultimately helpful Kaa the snake, Isabella Ceja as the giggling, toadying hyena, and Ashlyn Mather as the playful monkey Perchy. Solid performances from Hanah Toyoda as Akela, Ivan Gamboa and Roman Sanchez as her cubs, and Elio Robles as Hathi the elephant engage the audience and keep the story moving forward.

But what about Baloo the bear? In Lescher's production, his character (Matthew Hern) starts out as the teacher on duty during recess (the "urban playground" of Mast's original script), where he's surrounded by students intent on their mobile devices. As recess ends, he snatches the devices away from the students who, seconds later, have miraculously stopped whining about their absent devices and are all sitting in a circle clapping. The teacher tosses them a box of scrap clothes from which they begin to fashion makeshift costumes while being informed of the laws of the jungle, all for reasons that are entirely unclear to the audience. At which point the teacher morphs into Baloo the bear and we return, thankfully, to the original Mast script.

While the idea behind this additional framing exercise is a good one, the execution does not do it justice. Once Hern moves into his Baloo character, his performance is much more assured, but the disruptions continue as he is required, again for reasons unknown, to cover scene changes by engaging the audience in rhythmic clapping exercises.

The scenic design by Derek Lane is minimalist but delivers a powerful atmospheric punch, particularly when fast-flowing water effects are required. Designer Alexander Stearns keeps the costumes simple with just enough detail to enable the actors to build an animal (or human) but not so much as to become cartoonish. The actors inhabit and use their costumes effectively, and the voice and sound techniques designed by Lane and Cory Stewart help to bring both the human and animal sides of the characters to life.

Imperfect framing and uneven introduction aside, the parallels between the schoolyard and the jungle life are nicely drawn. The suck-up hyena, the preening, shallow tiger, the bratty wolf-cubs growing into self-conscious, overconfident adolescents are familiar characters in schoolyards everywhere, and Friday night's audience clearly appreciated the humor behind the lessons, with much laughter to be heard in the almost-full auditorium.

Outside Mullingar, an emotional and comic tale of late love in rural Ireland, begins with a preview performance at Redwood Curtain Theatre on Feb. 25 and runs through March 19 with 8 p.m. performances Fridays and Saturdays and a 2 p.m. show on Sunday, March 13. Call 443-7688 or visit www.redwoodcurtain.com.

Dell'Arte's Carlo Theatre heats up with Keep the Fires Burning: A Dell'Arte Cabaret on Friday, March 4 and Saturday, March 5 at 8 p.m. Expect musical numbers, acrobatics and maybe some bawdy humor, as this one is for grown-ups. Call 668-5663 or visit www.dellarte.com.

Dell'Arte MFA students, performers from Trajectory and Synapsis take over Redwood Raks on March 6 at 7 p.m. with The Body Discourse Project, which touches on the nature of bodies and minds, abilities and disabilities. Call 616-6876 or go to www.redwoodraks.com. For the performance at the Carlo Theatre on Tuesday, March 8 at 7 p.m., call 668-5663 or visit www.dellarte.com.

Howl at the moon with Big Bad Wolf from Windmill Theatre from Australia, which opens the Arcata Playhouse's 10th annual family series on Friday, March 11 at 8 p.m. and on Saturday, March 12 at 2 and 7 p.m. Call 822-1575 or visit www.arcataplayhouse.org.