The quest to eat at (almost) every restaurant in Humboldt 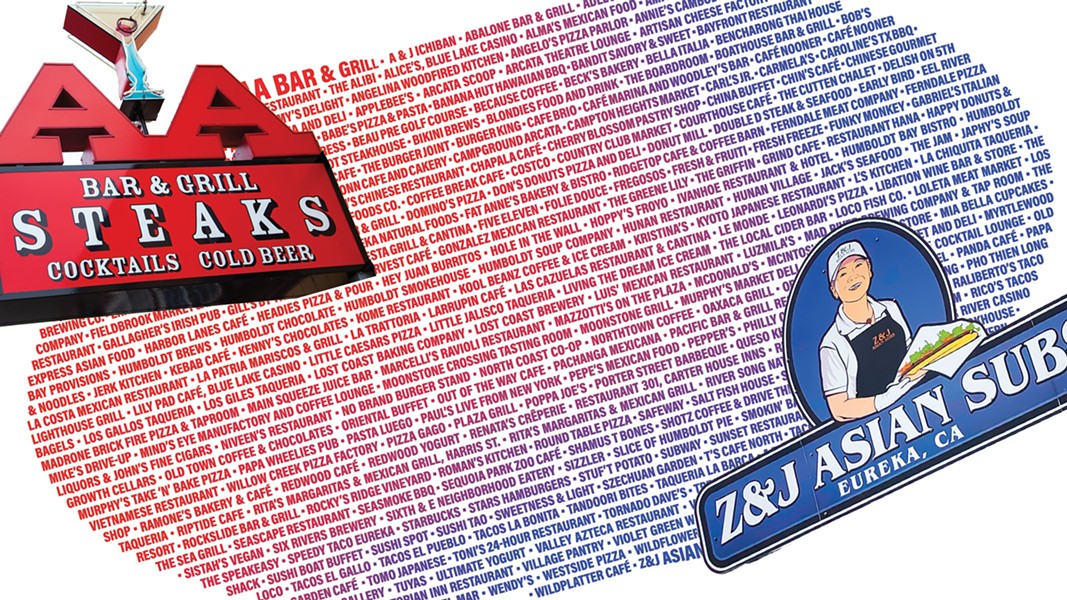 Ken Burton and Cindy Moyer are on a mission. Again. For the second time, they are making their way through an alphabetical list of restaurants in Humboldt County — the Journal's online A-Z Restaurant Guide, in fact — and eating at every single one within an hour's drive. Yes, in alphabetical order. The first time it took around seven years. Right now they're deep in the Ls and taking a break while Burton is out of town.

The reaction they get when they tell people about their quest is typically, they say, either that it sounds like a great idea or they're nuts. Mostly a bit of both.

The rules are simple but draconian in their way. The friends get together weekly, barring trips out of town, and, starting with the AA Bar and Grill, alternate responsibility for arranging a visit to each restaurant. Only the person planning the trip knows where they're going (which requires careful scrolling) and, unless a shop is closed, there's no skipping. Even if they aren't in the mood for Thai that day. Not even if they know a particular café is objectively awful. Despite the geographic limitations that unfortunately eliminate much of Southern Humboldt, Burton admits sometimes the food is not worth the trip. For him, it's no big deal.

"I mean, it's a meal, it's not going to kill us," says Burton. "And I like to give places a second chance. And a third chance and fourth chance if we live long enough."

It was Moyer's idea to not hit every outpost of a given fast food chain, despite Burton's protest that each Subway, for example, is a little different. "One will be sufficient," she says.

Burton, who has written outdoor and other articles for the Journal, is an ornithologist and, unsurprisingly, an avid birder. Over the phone from Roseburg, Oregon, he explains his current project, a study for Oregon State University, documenting creatures and plants at sites affected by logging and wildfire. "Biological field work inevitably involves documenting what's out there," he says, adding that it does make him consider his proclivity toward cataloguing and "if our restaurant game somehow fits into my overall nature." Asked about the possible connection to his hobby, Burton says with some amusement, "I've always been a list maker and a list keeper. ... Birding lends itself to the list-keeping personality. Eating out based on a list that somebody else created fits pretty well into that mindset, too."

"Ken's crazy alphabetical eating ... it's a very Ken thing. ... He's very systematic in many ways," says Moyer, who adds that Burton's alphabetical plowing through his Netflix queue throws off the streaming service's algorithmic recommendations. Moyer is the chair of Humboldt State University's music department, teaching violin, viola and music theory. She speaks quickly and laughs often over the phone. "I used to joke that his tombstone would say 'We made it to M,'" she says with a chuckle. She knew Burton through music (he plays percussion) and birding, and the two were already going through a hiking book hike by hike when she got invited along on the first Humboldt restaurant journey "somewhere in the Bs." (That was around 12 years ago, just before a married couple he was touring with fell off.) Back then they were eating their way through a hard copy of the Yellow Pages.

"I actually started this game with a girlfriend in Indiana a couple decades ago and we never got past the letter N," says Burton, who had to move before completing the list. "I think it just comes back to my nature. For one thing I hate making decisions. I do a lot of things in life by coming up with a system that decides things for me. ... We were in a relationship and it certainly saved a lot of time arguing about where to go." Even on his own, Burton has explored local food scenes systematically in other places he's lived, though in a smaller radius.

"I am about as far from a food snob as one can possibly be. I'm an opportunist and will eat just about anything," says Burton, who thinks living in lots of places — Kenya, Indonesia and Canada among them — may have made him unfussy. "A lot of times I feel like eating is just taking time away from doing other things. And yet I'm doing this. I'm just a bundle of contradictions. What can I say?"

Moyer, on the other hand, cares about food and is "scheming with friends to get into French Laundry someday." The draw for her is more about how the alphabetical approach takes her to places she wouldn't have otherwise gone, offering the occasional surprise, like the Indian Tacos at Blue Lake Casino's snack bar. She also echoed a sentiment Burton expressed: "It is a regular excuse to meet up with a friend, which is good."

It's a far cry from the never-ending highlight reel of styled food and glamorous good times on Instagram, and the dramatic effusions and vitriol of Yelp. The duo's posts (visible only to friends) are almost radical in their tight-lipped mundanity.

In more than a dozen years eating around Humboldt, they've come to similarly modest conclusions: Overall, the food scene in the county is improving, though more expensive, with more mid-range options and a little more ethnic diversity. Fortuna turns out to be a food scene to watch and La Patria Mariscos and Grill in Eureka is among their surprise favorites. Neither of them remembers exactly what they ordered at most places but that's not really the point.

"It's fun," says Moyer, "I wouldn't be doing it if it wasn't fun." Even the bad meals? She laughs. "Well, when you decide to do everything, you do everything."