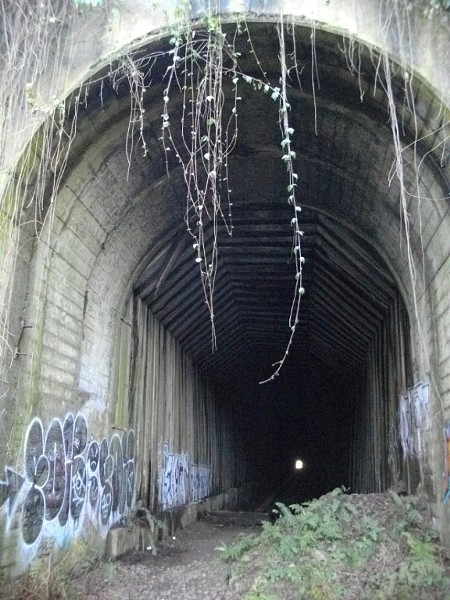 photo by Barry Evans Looking out from the southwest portal.

I'm told that the toughest part of the annual Memorial Day weekend Kinetic Grand Championship is the Eel River Drive hill up from Hookton Road heading toward Loleta. That's where the route crosses over Table Bluff, a 300-foot high sandstone ridge separating the Eel River valley from Humboldt Bay. If those hardy racers find the hill a challenge, they'll be in good company, including that of the lumbermen of the 1870s and 1880s who wanted to transport logs and lumber from the Eel to Humboldt Bay's sawmills and ship landings. Until the summer of 1884, they had two choices: Go around the ridge or over it.

Around 1873, local entrepreneur Charles Heney built a five-mile mule-powered, wooden-track railroad around the western end of Table Bluff, from McNulty Slough (which flows into the Eel River estuary) to Heney's new settlement of Southport Landing, near the present-day Wiyot Reservation. The railroad was short-lived because of a huge storm that permanently wrecked it in the winter of 1878. So much for going around the ridge. But the roads going over were terrible, as illustrated by a report in the Humboldt Times (April 15, 1876): "...surely we never before saw a highway in such deplorable condition. Great ruts and mudholes, into which the horse sank over knee deep and it is a mystery to us how the Rohnerville stages succeed in pulling through them." A railroad would solve the mud problem, but only if the route could avoid steep grades. What was needed was a route that went through Table Bluff.

The Pacific Lumber Company owned huge tracts of redwood in the Eel valley, and its ambitions for a huge new mill at Scotia (named for the many natives of Nova Scotia who had settled there) resulted in a permanent solution to the Eel-to-Bay transportation problem. After several lumber barons -- John Vance, William Carson and Captain Henry Buhne among them -- joined forces in 1882 to create the Eel River and Eureka Railroad, work on a tunnel soon followed. Working day and night, crews dug from both ends to complete the one-third-mile-long tunnel by the summer of 1884.

For 114 years, the tunnel was a vital conduit for countless trains bringing lumber from the Eel River basin to Fields Landing. In 1907, many local railroads were reorganized and brought under one umbrella company, the Northwestern Pacific Railroad, and today the tunnel is officially designated NWP No. 40. It's in good shape today -- it was renovated in 1960 -- with tracks still running through it. If you want to check it out, start in Loleta and walk north-easterly about one mile up the NWP tracks. Boots and flashlights are recommended for the full through-the-tunnel experience.

Barry Evans (barryevans9@yahoo.com) thanks Mike Kellogg and the Timber Heritage Association for help with this column. THA will be running a speeder from Loleta to the tunnel entrance this coming July 14 and Oct. 12. Call 443-2957 for more information.