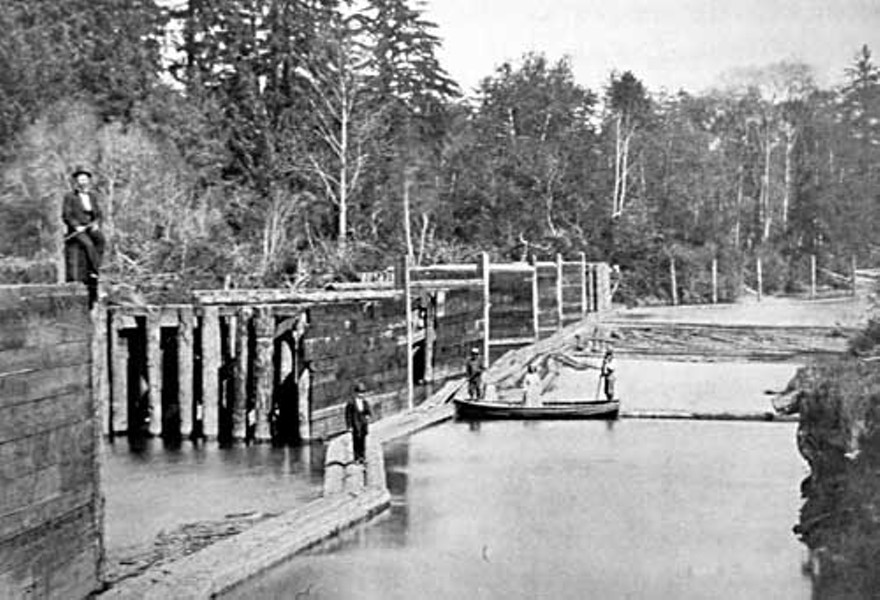 Boom across the Mad River about 1880. Photo courtesy The Humboldt Historical Society 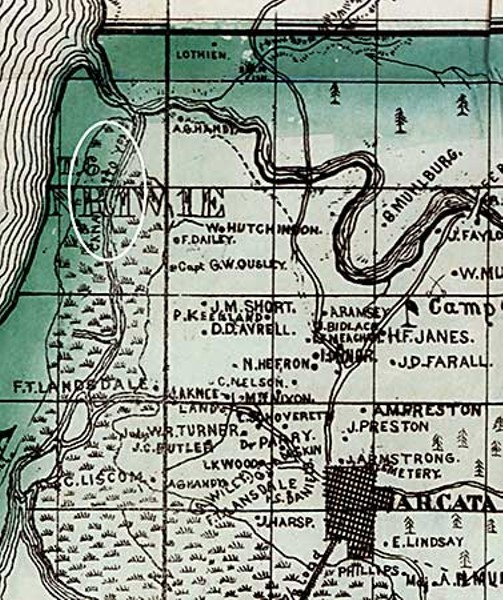 A few weeks ago in this column, I mentioned that, contrary to local lore, the Mad River Slough was never an outlet for the Mad River. The Mad has always flowed west into the Pacific, not south via the slough into Humboldt Bay. However, from 1855 to 1888, the Mad River and Humboldt Bay were joined, artificially, by a canal which allowed early European settlers to float old-growth redwoods from the Mad River to the newly built sawmills on Humboldt Bay, for transport by ship to San Francisco and beyond.

Ten years after it was dug, a canal is shown on the "Official Township Map" of Humboldt County -- you can make out "CANAL 710 YDS." on the original (outlined in white). Note also where the Mad River is shown entering the Pacific, over a mile south from its present mouth. (It varies depending on the season and the intensity of winter storms). The mouth of the Mad originally delineated the southern border of Klamath County, which extended to the Oregon border from 1851 to 1874. The white area at the top of the map indicates the north and south boundaries of Humboldt and Klamath counties respectively.

The photograph shows the boom built across the Mad River to divert logs from their westerly course to a southerly route into the canal and bay. It was rebuilt many times. The same winter high-flow conditions which allowed the huge redwood trunks to float down the river also caused the massive logs to regularly pound the boom into smithereens.

There was another problem: the canal carried silt from freshly logged areas on the Mad River into the bay. According to Ray Raphael and Freeman House's fascinating (and often tragic) local history Two Peoples, One Place, * "from 1881 to 1930, the Arcata channel had to be dredged to eliminate the sediment that had flowed into the bay from logging operations on the Mad River ... Concern over the impact of logging on the flow of water, so controversial to this day, has historical roots dating back more than a century." Two years after an article dissing the canal had appeared in the Arcata Union in 1886 ("that cursed canal ... is a nuisance, and has been for the past 30 years"), the Harbor Commission ordered the canal closed.

Next time you visit the Mad River County Park, note the line of willows and the ditch which takes off to the left a quarter mile west of the Hammond Trail bridge (adjacent to a private driveway), and spare a thought for the old-timers who believed they could tame nature. They were wrong.

Barry Evans (barryevans9@yahoo.com) regularly paddles his kayak up and down the Mad River Slough. He lives in Old Town Eureka.

Boom across the Mad River about 1880. Humboldt Historical Society