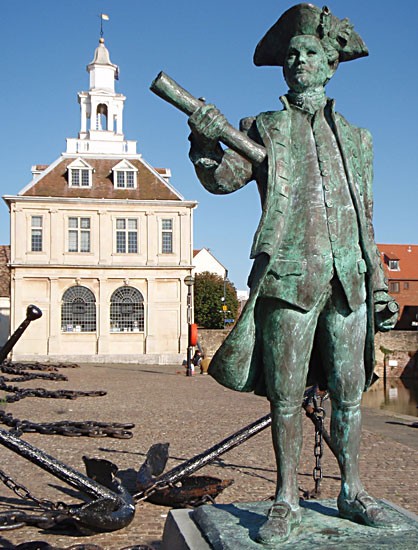 In hindsight, it seems incredible that Humboldt Bay wasn't discovered by European explorers until 1849. That's when Josiah Gregg's overland expedition from Weaverville stumbled on the bay, which was finally entered by sailing ships the following year. Many ships had sailed up and down the western seaboard previously, all of them missing one of the most important openings in the coast.

Of the several potential discovers of Humboldt Bay prior to 1849, Royal Navy Captain George Vancouver is my prime candidate. Born in Norfolk, England in 1757, he served as a midshipman on two of James Cook's expeditions before being given command of HMS Discovery, a 330 ton sloop, on what turned out to be a five-year Pacific expedition. He was an expert navigator and surveyor, and his charts of the Northwest coast were so accurate that they served generations of coastal navigators into the 20th century.

That said, overlooking the entrance to Humboldt Bay was the least of his near-misses: He also managed to sail right by the mouths of the Columbia, Fraser and Skeena, three of the most important rivers on the West Coast. Had he explored the Columbia prior to American captain Robert Gray's venture upriver in 1792, the river might have defined the boundary of the U.S. and Canada, leading to a very different history of the Pacific Northwest.

And had Vancouver spotted the entrance to our bay after sailing across the Pacific from Hawaii to near Point Arena in April 1792, before heading north up the coast, the history of our own region might have been different. It's likely that Eureka would have been developed much earlier than it was, easily superseding San Francisco as the preeminent port on the west coast.

Anyone who has sailed off the coast will sympathize with Vancouver's failures. Between poor visibility, low coastlines and -- in the case of the Fraser -- a messy delta, it's easy to miss what turned out to be such important features. What he did do, in addition to charting most of the coastline of present-day British Columbia and maintaining good relations with both the native population and other explorers from Spain and the USA, was to determine that the putative Northwest Passage didn't exist at the latitudes being suggested at the time (45 to 50 degrees north).

And hey, he's got the biggest island on the west coast named after him, in addition to one of the greatest cities on Earth. Not bad for a limey.

Barry Evans (barryevans9@yahoo.com) champions the limey cause in Old Town Eureka, where he and his colonial wife live.