Waltz With Bashir -- a powerful meditation on memory and war 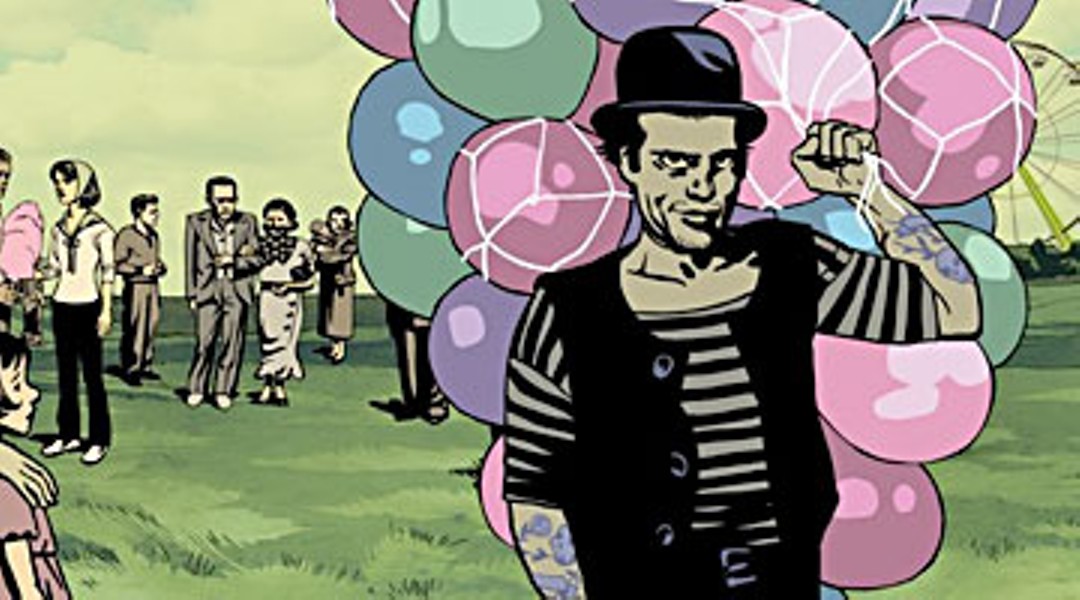 Opening Friday, March 6, is the long anticipated Watchmen, the latest superhero film based on the comic book series written by Alan Moore and Dave Gibbons. Directed by Zack Snyder (300), the story is set in an alternate history 1985 (Nixon is president) against the backdrop of rising tensions between the U.S. and the Soviet Union. At the same time, one superhero (Rorschach) is investigating the death of another (The Comedian), and what he discovers appears to be a plot to kill off the heroes themselves. The graphic novel made Time's list of 100 Best Novels. The cast includes Billy Crudup, Jeffrey Dean Morgan, Jackie Earle Haley, Malin Ackerman and Patrick Wilson. Rated R for strong graphic violence, sexuality, nudity and language. 163m. At the Broadway, Mill Creek, Fortuna and Minor.

STREET FIGHTER: THE LEGEND OF CHUN-LI: Expectations for films based on video games aren't extensive. Acting and script are mostly irrelevant; all that's needed for the target audience is some good CGI, some well-staged fight scenes, and a lot of action with as little boring narrative development as possible. Nonetheless, I had higher expectations for this not-screened-for-critics release; I hoped for a film so bad it would be fun to review. Alas, yet another film that let me down.

Street Fighter: The Legend of Chun-Li turns out to be merely an average example of the genre. The basic story seems overly familiar, turning as it does on a daughter's search for her father who had been kidnapped by the bad guys. The somewhat slow opening sets the stage for the main part of the film. We see the young Chun Li (Kristin Kreuk, Smallville) on the road to being a concert pianist when the family moves to Hong Kong, where she learns Wushu from her father Xiang (Edmund Chen) while her admiring mother (not long for this world, as it transpires) looks on. When Xiang, an important businessman, is kidnapped by Bison (an absurd Neal McDonough) and his thugs, Chun-Li's world is changed forever.

The rest of the film takes place in Bangkok after Chen-Li has grown and become a concert pianist. Unbeknowst to her, Xiang has been forced to help Bison in return for his daughter's safety. But a scroll left after a concert directs Chun-Li to find someone named Gen (Robin Shou) in Bankok. She finds Gen, learns the truth, and the rest of the film writes itself, including the teacher/pupil relationship between Gen and Chun-Li, where she completes the inner training that will enable her to bring down the nasty Bison and his cohorts.

The martial arts sequences, too few, are decently choreographed but unfortunately overshadowed by the tedious gunfights. The dialog is laughable for the most part, including the irritating voice-over narration by Chun-Li, and the acting isn't even up to the low genre standards. I can remember when McDonough used to try to act, as in the former TV series Medical Investigation, but here he gets a grip on caricature and doesn't let go.

There is also a seemingly unrelated side plot involving Bangkok cops Charlie Nash (Chris Klein) and Maya Sunee (Moon Bloodgood), who are also after the cartel headed up by Bison, and I assumed the primary purpose of this storyline was to give the guys a lot of generous cleavage. But, as it turns out, Chun-Li hooks up with them in time for the climax.

There were mostly young guys at the screening I attended and it was hard to tell if they enjoyed the film (no oral comments and no applause at the end). But since I need something to be happy about in relationship to this film, I'll content myself with hoping they did. Rated PG-13 for sequences of violence and martial arts action, and some sensuality. 97m. At the Broadway.

WALTZ WITH BASHIR: One of the nominees for Best Foreign Language Film, the affecting Israeli film Waltz with Bashir is an animated documentary about writer/director Ari Folman's attempt to recover his memories of the 1982 Lebanese war, of which he is a veteran. In particular, he seeks to recall the awful events of the Sabra and Shatila massacres, which turn out to be the most difficult to unlock.

The narrative itself is straightforward: Folman realizes that in 2006, he can remember nothing about his experiences as a 19-year-old Israeli soldier during the war with Lebanon. But after meeting with a fellow veteran, Folman has a dream about bathing at night in the sea near Beirut. The rest of the film follows Folman as he seeks out others who were in Beirut at the same time.

As a result of the conversations, Folman gradually recovers his memories of the war, seen in flashbacks. But the decision to create an animated film to tell this story sets this film apart, along with its seeming relentless honesty. Unlike many political films made in Hollywood, Waltz with Bashir does not shy away from moral ambiguity.

I'm not sure why the animation increased the effectiveness of the film's storytelling, but it may have to do with the nature of memory itself, which is often a slippery and elusive thing. As the film notes, memory tends to fill in blank gaps with logical but not necessarily accurate details. The dark, often inconclusive images of this animated documentary seem a perfect way to capture that quality of memory, recovered or otherwise.

It also becomes apparent that the memory loss is not just Folman's. At one point he recalls returning home on a brief leave to discover that people back there are going about their normal activities as though no war is occurring. Indeed, when Folman finally recalls the events of the massacre, the memory the whole film has been leading to, his view of the events is distant and partial, paralleling that of the Israeli command. Informed that a massacre appears to be taking place (carried out by a Lebanese Christian militia group), the commanders say thanks, they'll look into it.

Where the responsibility for Israeli inaction lies is no doubt complicated, but clearly Folman's own repressed memories are due largely to his belief that he bore personal responsibility for the massacre. The film is not, however, an attempt to purge that responsibility, but to acknowledge it. In creating an intensely personal memoir, Folman also reveals the complexity of moral and ethical action on the part of individuals and groups.

As it turns out, animation itself has its limitations, a fact that informs Folman's decision to abandon it for the film's final images. Waltz with Bashir is an effective film and a powerful statement about the human condition. Rated R for some disturbing images of atrocities, strong violence, brief nudity and a scene of graphic sexual content. 90m. At the Minor.

CONFESSIONS OF A SHOPAHOLIC. Fun-loving metro girl kicks ass at shopping while pursuing her life dreams. Rated PG. 105m. At the Broadway and Mill Creek.

CORALINE. Girl finds a secret door leading to a parallel, better reality. But there's a catch. Rated PG. 100m. At the Broadway, Mill Creek and in 3-D at the Fortuna.

THE CURIOUS CASE OF BENJAMIN BUTTON. Brad Pitt ages backward, Cate Blanchett ages forward, they enjoy blissful moments in the middle and confusion at either end. Rated PG-13. 166 m. At The Movies.

FIRED UP. High school football stars hatch a scheme that lands them in a sea of sexy ladies instead of summer football camp. Rated PG-13. 90m. At the Broadway.

HE'S JUST NOT THAT INTO YOU. Women, men and their relationships. Rated PG-13. 132m. At the Broadway and Mill Creek.

HOTEL FOR DOGS. Kids faced with "no pets" rule in their new foster home convert abandoned hotel into foster home for doggies. Rated PG. 100m. At The Movies.

INKHEART. Beware of reading aloud: You may get sucked into the book's pages while a character gets released into the real world. Rated PG. 106m. At The Movies.

JONAS BROTHERS: THE 3D CONCERT EXPERIENCE. Follow the Jo-bros as they cross the nation on their "Burning Up" tour. Rated G. 106m. At Fortuna.

LAST CHANCE HARVEY. Struggling, middle-aged father gets rejected by his daughter but then finds unexpected love in an airport bar. Rated PG-13. 99m. At the Broadway and Mill Creek.

PAUL BLART: MALL COP. Mall cop must man up to save the day when Santa's helpers at the mall stage a coup. Rated PG. 91m. At the Broadway and Fortuna.

PINK PANTHER 2. Inspector Jacques Clouseau is at it again. Rated PG. 93m. At The Movies.

SLUMDOG MILLIONAIRE. Orphan from slums of Bombay who rocks India's Who Wants to be a Millionaire must clear his name of cheating before claiming his prize. Rated R. 121m. At the Broadway, Mill Creek, the Minor and Fortuna.

TWILIGHT. Teen girl gets swept up in unorthodox romance with vampire. Rated PG-13. 122m. At The Movies.

UNDERWORLD: RISE OF THE LYCANS. The Death Dealers, a group of aristocratic vampires, versus the Lycans, barbaric werewolves. Rated R. 93m. At The Movies.

WRESTLER. Retired wrestler who rocked in the 1980s attempts to stage a comeback in the ring. Rated R. 110m. At Mill Creek.